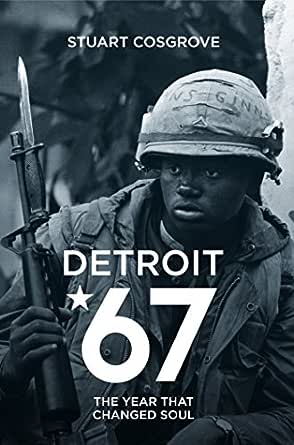 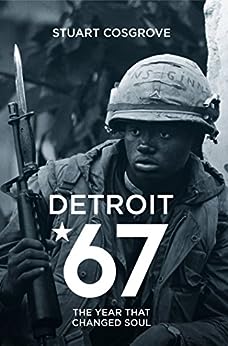 Stuart Cosgrove is a professional journalist and commentator living in Perth, Scotland. He currently serves as an executive for the television station Channel 4 and presents Scotland’s most successful radio show, Off the Ball.

4.4 out of 5 stars
4.4 out of 5
86 global ratings
How are ratings calculated?
To calculate the overall star rating and percentage breakdown by star, we don’t use a simple average. Instead, our system considers things like how recent a review is and if the reviewer bought the item on Amazon. It also analyzes reviews to verify trustworthiness.
Top reviews

Christopher Remy
3.0 out of 5 stars A good read, but
Reviewed in the United States on May 29, 2017
Verified Purchase
A good read, but, the typos and grammatical errors geez, especially later in the book, it's like they gave up. Otherwise an interesting and emotional take on the music and social politics of the time period.
Read more
One person found this helpful
Helpful
Comment Report abuse

PghWriter
4.0 out of 5 stars Important book
Reviewed in the United States on May 10, 2015
Verified Purchase
This is an incredible book about some of the most important events of music history and American history in general. Cosgrove goes month-by-month through the calendar, explaining what was happening in Detroit music at the time: key events like Florence Ballard's departure from The Supremes, the July riots, the duets of Marvin Gaye and Tammi Terrell, the eventual departure of the songwriting team Holland-Dozier-Holland from Motown. It's true that there are a few inaccuracies and inconsistencies, but none of those seriously affect Cosgrove's narrative or argument. They're the type of thing that having a better copy editor would have fixed. He's planning two more books, Memphis '68 and Harlem '69. I eagerly await those! But include a more extensive bibliography, discography, and notes next time!
Read more
3 people found this helpful
Helpful
Comment Report abuse

Gilbert Merciez
1.0 out of 5 stars Too many inaccuracies
Reviewed in the United States on April 24, 2015
Verified Purchase
Book is filled with inaccuracies. I grew up in Detroit and graduated from High School in 1967. I was very familiar with what was going on at that time. There were multiple instances of wrong street names, confusing 12th Street & 14th Street at one point. Identifying the Sheraton Cadillac as the Sheraton Chrysler. One of the characters in the book was described as living next to the Hamtramck Poletown Assembly Plant when it wouldn't be built for another 15 years. Claiming Jimi Hendrix burned an American flag when it was actually his guitar. Hendrix never burned an American flag. Numerous grammatical mistakes. Cosgrove seemed to try to fit events into 1967 that were from later years. Much of the material on the MC5 was from 1968 & later. John Sinclair was sentenced to 10 years in prison in 1969 and the Free John Sinclair show in Ann Arbor with John Lennon didn't happen until Dec. 1971. Timeline for some of the events of the riot were not correct. I would often have to put the book down as it made me so angry with the mistakes. It's very obvious that Cosgrove's Detroit is only one that he read about. I doubt whether he ever set foot in the city.
Read more
25 people found this helpful
Helpful
Comment Report abuse

Kevin Killian
HALL OF FAME
4.0 out of 5 stars Towering Inferno
Reviewed in the United States on September 8, 2017
Stuart Cosgrove has written a deep cut sort of book primarily about Motown, but one that takes the time to explore the paradox of an art form that worked beautifully in the midst of personal and sociopolitical nightmare.

The recent Kathryn Bigelow film about the “Algiers Motel Incident” covers some of this ground, rather controversially, but without the music in the foreground. Cosgrove risks ridicule by proposing in page after page that the firing of Florence Ballard from the Supremes parallels what was happening in the USA during 1967, but his general thesis is convincing enough, that the Detroit riots, and the gradual professionalization of Motown, split the city and the music industry into ranks of caste and social class, so that Berry Gordy and Diana Ross wound up leaving Detroit behind for the greener pastures of LA. Stuart Cosgrove has a firm grasp on the history and politics of Detroit, and he loves him his Motown, but at some points one has to wonder if a black journalist might not have been able to serve this material better, just as Bigelow’s film might have been better with a black director? But he can certainly spin many narrative lines at once! For the first time I was able to put it together about the many deaths that plagued Motown during this tumultuous year, and the tragedies such as Tammi Terrell’s onstage collapse.

How is it I never knew that Marvin Gaye began writing his landmark 1971 LP “What’s Going On?” in 1967? (Berry Gordy, his brother in law, tried to dissuade him, telling him he was a pop singer and people didn’t want pop singers jawing about such hot topics as police brutality.) At the back of all the stories we hear not only about racism and economic violence, but we hear always the echoes of VietNam and the protests against an unjust war.

Cosgrove breaks this down month by month, and goes even further by assigning a general topic, sometimes an impressionistic one, to each chapter: August is “Ordeal,” and September is “Surveillance,” for example. This novelistic method works best as a way to tell the story of oversized people, like Gladys Knight, or weird Gothic urban tales like the Algiers Motel murders. Oddly enough, there isn’t enough about the music here. What was it that made Motown so infectious? It’s almost as if Cosgrove avoids employing much critical vocabulary in order to avoid the fanboy drivel that plagues so many 33 1/3 books, but he goes too far in the opposite direction. And he overuses a couple of favorite adjectives, especially “towering.” They’re all of them divas in this book—not only Diana and Martha Reeves, but people like Aretha Franklin and Leni Sinclair. Cosgrove shows how, as the year progresses, anger and despair gave rise at Motown to a new, rockier sound, one with psychedelic edges, and here his hero proves to be the songwriter/producer Norman Whitfield. But in every chapter there are a few Motown singles which you and I have never heard of and he describes them with enough grace to make you want to find them instantly. So I had quite an education reading this book.

Iain Peter Black
3.0 out of 5 stars A good book in need of a proof reader and an editor!!
Reviewed in the United States on May 21, 2015
I really am enthusiastic about the subject and read the text with interest and frequent enjoyment and it sent me back again and again to listen to the music which is always a good sign. However I cannot think of any book I have read which is so crying out for a decent editor and a proof reader. Did no one perform either or both of these essential tasks? I cannot comment on the accuracy of the information in the text as a previous reader has but really the amount of needless repetition of facts/information became really, really irritating. There were frequent typographical errors, extra letters, wrong words etc, which too often made the text read like something poorly translated from another language! And as for the punctuation... such frequent use of the comma splice made comprehension rather difficult at times. When a full stop to end a sentence properly is required then that's what is used, not a series of commas. Detroit 67 is so clearly a labour of love on Stuart Cosgrove's part that one has to wonder what went on that resulted in the publication of this terrible mess of a book.
Read more
9 people found this helpful
Helpful
Comment Report abuse
See all reviews

lucas smith
4.0 out of 5 stars Good book
Reviewed in the United Kingdom on August 3, 2018
Verified Purchase
Pretty good history book.Even though most of it has been written about before.A good book provides me with new information about the subject. Unfortunately this didn't really do that.But it is well written.
Read more
One person found this helpful
Report abuse

S. Armstrong
4.0 out of 5 stars Well done but needs a re-edit.
Reviewed in the United Kingdom on April 13, 2017
Verified Purchase
Excellently researched and put together by Cosgrove but, as other reviewers have said, where was the Editor? The most typos I have ever come across in a published work (Kindle edition). Still well worth it for enyone interested in the music and social politocs of sixties America.
Read more
One person found this helpful
Report abuse

Mr. Steven Goodfellow
4.0 out of 5 stars Interesting and entertaining, but...
Reviewed in the United Kingdom on December 22, 2015
Verified Purchase
I enjoyed reading this book and found the history around the music fascinating, but it was ultimately a little depressing. In my view the wonderful music produced at this pivotal time shows how the human spirit can overcome even the greatest personal and national challenges.
I was also a bit irritated by the many typographical errors in this kindle edition.
Read more
One person found this helpful
Report abuse

Steve
4.0 out of 5 stars Detroit 67. My opinion.
Reviewed in the United Kingdom on March 10, 2016
Verified Purchase
Interesting account of the Detroit scene in 1967 with Motown, Vietnam and the riots. Good insight into the inter relationships between members of groups like the Supremes, and not always positive. A good read and worth buying if you're interested in the place and the period, especially Motown buffs.
Read more
Report abuse
See all reviews