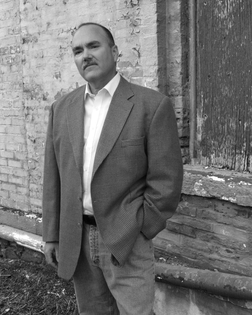 “Johnson's third chronicle of early-1900s Detroit provides a mystery with suspects aplenty and a scary portrait of life in an insane asylum.” ―Kirkus Reviews

“While exposing his characters to sadistic doctors, violent orderlies, and chaotic, frightening madness, Johnson ratchets up the tension as the killer repeatedly eludes capture. The Phantom's unmasking is such a shock that readers will wonder if Elizabeth and Will can ever recover. As suspenseful and twisted as Lehane's Shutter Island (2003) and Lavalle's The Devil in Silver (2012), this taut historical thriller is a definite winner.” ―Booklist

“Johnson's spooky third series entry ensures its place among hot new historicals. His unique take on Detroit in the early 20th century and its burgeoning automotive culture make this entry a perfect crossover selection for historical fiction buffs. The lead characters--chapters alternate between the two narrators--have a checkered and violent past that Johnson fills in nicely for new readers. Recommend for Stefanie Pintoff and Caleb Carr devotees.” ―Library Journal

“Detroit Breakdown is a powerful dark historical noir. Fast-paced from the moment Will enters the asylum, readers will be shocked by the treatment he receives. The serial killer inquiry is superb, but it is the conditions at the Eloise Insane Asylum that grips the audience as D.E. Johnson provides another superb Anderson Motor City Shakedown.” ―Genre Go Round Reviews

“Johnson's vibrant follow-up to The Detroit Electric Scheme delivers razor-sharp depictions of the Motor City. Johnson brings the turbulence and rampant corruption of the era to life through his flawed yet tenacious lead in this worthy successor to his debut.” ―Publishers Weekly (starred review) on Motor City Shakedown

“If Dennis Lehane was from Detroit, this is the book he'd write. The Motor City was once the most important city in the world, and D. E. Johnson does a masterful job at making that time and place come alive on the page. Motor City Shakedown is as hard and tough and downright noir as anything I've read in recent memory, but it's got a beating heart, too.” ―Steve Hamilton, Edgar Award–winning author of The Lock Artist, on Motor City Shakedown

“The surprise ending leaves you gasping and shaking your head at Johnson's masterful plotting and the menacing tension that forces otherwise good characters to behave despicably. Every bit as powerful as Patricia Highsmith's Ripley series, this gem of a debut showcases an author to watch very closely.” ―Booklist (starred review) on The Detroit Electric Scheme

“An empathetic hero and an abundance of interesting historical detail should keep readers engaged.” ―Kirkus Reviews on The Detroit Electric Scheme

“Full of nonstop action, plot twists and turns, and great insight into the early history of the U.S. car industry, this debut is part coming-of-age tale and part historical mystery. Essential for historical fans.” ―Library Journal on The Detroit Electric Scheme

“Absorbing.” ―The Seattle Times on The Detroit Electric Scheme

D. E. Johnson, a graduate of Central Michigan University, is a history buff who has been writing fiction since childhood. He comes by his interest in automotive history through his grandfather, who was the vice president of Checker Motors. Johnson is also the author of The Detroit Electric Scheme and Motor City Shakedown and lives with his family near Kalamazoo, Michigan.

Start reading Detroit Breakdown (Detroit Mysteries Book 3) on your Kindle in under a minute.

Kelly Stanley
5.0 out of 5 stars Each of his books just gets better
Reviewed in the United States on September 21, 2012
Verified Purchase
I'm not a huge history fan, nor am I all that interested in the automotive industry. Luckily, I didn't let that deter me and I listened to all the reviewers who were raving. Dan Johnson's Detroit Breakdown is fast-paced and intriguing and full of twists and turns, like his first two books (Detroit Electric Scheme and Motor City Shakedown), only better. In this book, the narrative alternates between Will, the main character in the earlier books, and Elizabeth. It was refreshing to have a woman's perspective and I think that shows as well as anything else what a good writer Dan Johnson is. The language, the details, the observations, the descriptions -- the time period comes alive in these books. I was fascinated by the insane asylum, treatments, and beliefs of the time, all of which were a big part of this book. The twists in this story will keep you turning pages long after you should have gone to bed. I guess that's why I tend to read his books in something like 24 hours. Just too good to stop.
Read more
3 people found this helpful
Helpful
Report abuse

RAH1
5.0 out of 5 stars A good series of historical fiction with real places and some real people in the mix
Reviewed in the United States on November 12, 2018
Verified Purchase
In medical school I had a senior elective on the orthopedic service at Wayne County Hospital. We took care of the patients at Eloise when they had fractures and made ward rounds in their follow-up care. Very large dismal open wards with many beds in one big room giving a feeling of depression. The patients were derisively referred to as POGIES, Poor Old Gomer In Eloise. I vowed never to use derisive slang with anyone and treat my patients with dignity and respect regardless of their status. This book retrieved some vivid memories.
Read more
Helpful
Report abuse

J. Roper
5.0 out of 5 stars Another Great Mystery by D.E. Johnson
Reviewed in the United States on October 17, 2012
Verified Purchase
I am a huge fan of D.E. Johnson and as such I have high expectations. And Johnson delivered with another great historical mystery, Detroit Breakdown (also received a starred review from Publisher's Weekly). Johnson added Elizabeth's point of view for this, the third book in the series, to great effect. The suspense ratchets up when Will has himself committed to an asylum to figure out who has been murdering patients and clear Elizabeth's cousin Robert who is being accused. Vivid description with a unique setting, great characters, and a mystery that will keep you guessing until the end make Detroit Breakdown an exciting read. Loved it! Looking forward to more from one of my new favorite authors. I highly recommend The  The Detroit Electric Scheme: A Mystery  and  Motor City Shakedown  as well.
Read more
Helpful
Report abuse

Mike Binder
5.0 out of 5 stars Best in the trilogy
Reviewed in the United States on March 26, 2013
Verified Purchase
This is an excellent addition to D.E. Johnson's first two Detroit books The same characters are back, it's richer, the writing, I think, is better, it's scary and its truly a page turner even though that's an overused expression. If you like historical fiction or reading about early Detroit, these books will teach you a lot you didn't know and entertain you as well. D.E. Johnson's fast becoming one of my favorite authors.
Read more
Helpful
Report abuse

V. Rowan
5.0 out of 5 stars History comes alive in Detroit
Reviewed in the United States on April 1, 2015
Verified Purchase
The author has put a ton of research into this novel, and it shows in the narration and the details of the locations. Fast paced story with a good story line. Puts a new perspective on how things were run in early 1900s mental institutions.
Read more
Helpful
Report abuse

mike
5.0 out of 5 stars I like all the books in this series.
Reviewed in the United States on October 5, 2013
Verified Purchase
I have read it (as well as all the other books in the series) before from the public library and really enjoyed it. I just wanted a copy for myself and this was the easiest way to get one since there isn't a book store within 30 miles of my house.
Read more
One person found this helpful
Helpful
Report abuse

Jane Doe
4.0 out of 5 stars Great series
Reviewed in the United States on September 18, 2013
Verified Purchase
A terrific period mystery story that doesn't allow any fascination with the era to bog down the story. I only wish I had started with the beginning of the series instead of this one, but I'm NOT sorry I read it!
Read more
Helpful
Report abuse