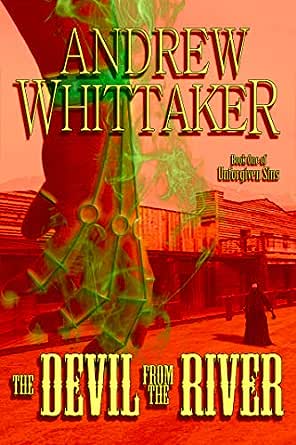 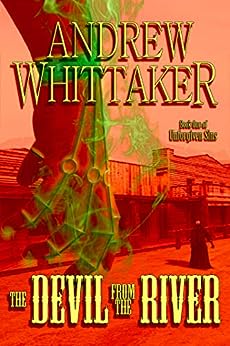 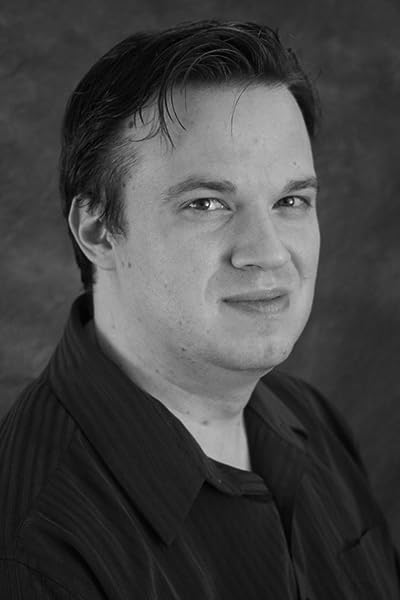 The Devil from the River: Book One of Unforgiven Sins Kindle Edition

"The Devil From The River had me hooked from beginning to end." - Emily, Books of All Shades

Born in 1983, Andrew misspent his youth in Virginia and Utah where he ignored his teachers and cultivated an imagination with friends by wandering around the forests and mountains. Typically, they would go on long adventures and role play the characters they created.

His passion for stories came from his parents, who both raised him on "Star Trek", "Star Wars", and "Lord of the Rings", but he came into his love for Epic Fantasy in high school when he discovered Robert Jordan's "The Wheel of Time".

He began writing his own stories in middle school when he tried to write a script for "The Legend of Zelda". That didn't go anywhere, but Andrew's love of writing followed him into his college days. He graduated from Utah Valley University in 2010 with a degree in Creative Writing.

Kindle Customer
5.0 out of 5 stars Action!
Reviewed in the United States on November 7, 2018
Verified Purchase
There certainly was never a dull moment in this book. I thoroughly enjoyed the refreshing voice and style of writing. By the end of the book I even found myself loving certain characters I didn’t think I could love. I was pulled through the adventure and am now eagerly awaiting the second book.
Read more
One person found this helpful
Helpful
Comment Report abuse

Grace
5.0 out of 5 stars Awesome story!
Reviewed in the United States on September 17, 2018
Verified Purchase
Great read, the characters had great chemistry, and the monsters were terrifying! I had a hard time putting it down!
Read more
One person found this helpful
Helpful
Comment Report abuse

Matthew Moody
5.0 out of 5 stars Support local authors, and buy a book.
Reviewed in the United States on November 15, 2018
Verified Purchase
I enjoyed this book. It’s a fairly nuanced idea, with rich and involving characters.
Read more
One person found this helpful
Helpful
Comment Report abuse

Maria E. L. Thomassen
4.0 out of 5 stars Action-packed Wild West Story with Power!
Reviewed in the United States on January 23, 2019
David Nelson’s life changes, as a body washes up on the banks. His life, and the life of the people around him is pulled into a wheel of change, violence and a fight to survive the creatures, bone-rippers, Death Walkers and crazy scientists has begun. How will our friends, fight the battle and avoid the pull of the Four Hells?

“Action from the first page!”

The Wild West meets John Carter in this action-packed story, which had me intrigued from the get-go!.

There’s A Lot of good description, making it easy to imagine, as Mr. Whittaker paints a good ‘Worture’ (Picture of Words).

There’s good humor, and exciting scenes, imaginable creatures and likable characters. The reader gets to appreciate them, and the way the point of view shifts you get to actually “miss” the ones not in the frame.

This special telling got some wild content, extraordinary and ancient names, and as a girl who loves the idea of cursing, this book got some enjoyable curse words, different, but nice! There’s a lot of different terms, some you don’t come by everyday, and I liked the twist of having a description of something, that I didn’t really see coming, yet it gave me a good picture of what was going on.

“Burn my soul, and piss on the ashes!”

These memorable characters brings emotions to you, as you follow their crazy journey, and honestly it’s hard describing this book without giving away or spoiling too much.

I was surprised by the action and violence of this book. I love the themes of this story and I kept being amazed by the raw image created about the things going on. Some things seemed familiar, yet totally new. I was entertained, surprised and impressed by this story. I could easily imagine what the fierce and challenged characters went through, you can sense their anger, frustration and pain.

Four Hells – If you’re a fan of Wolverine and John Carter this violent, wild and action-packed book is the deal for you!
Read more
One person found this helpful
Helpful
Comment Report abuse

Danielle Novotny
4.0 out of 5 stars High action, firepower, and adventure!
Reviewed in the United States on May 13, 2020
Devil from the River is a western steampunk story, and oh my ashes did it live up to those two genres. Spanning four different perspectives, Whittaker creates a world destroyed by fire, fearful of ‘old technology,’ and filled with enough gun-slinging heroes to keep you turning pages long into the night. When David Nelson, the cautious sheriff from River’s Edge, and his companions, Red and Tom, discover what they believe to be a devil washed up from the river, they have no idea how much trouble they’ve found and how dangerous their lives are about to become.

From a high level perspective, what I loved about Devil from the River was how smoothly the story flows. There are four perspectives, an entire world of new creatures and technology, and constant – yet supportive – hints at the characters’ pasts. With all the back and forth at the beginning of the novel, it took me a while to figure out that David truly was one of the two protagonists. We start with his perspective, but his importance doesn’t kick in for a few chapters. He’s curious about the mysterious Jerod who washes up on the riverbank, but we don’t see David’s motives for a while. But when they do appear… by the Ash Bringer’s beard, no one will doubt that this man has a grudge to settle. And he seems to have quite the fascinating backstory which Whittaker only briefly teases at. There’s heartbreak, lost political status, and a wide range of fighting skills buried in David’s past that round out this character.

Jerod, on the other hand, is immediately important. A strange man with the ability to heal from anything? It was obvious that he has a huge role to play in this series, and just like David, Whittaker teases bits and pieces of Jerod’s past to make the readers fall for this unfortunate, yet powerful, creature. Jerod is also poised as someone with differing beliefs – he has a strong connection to the earth, and several times he scorns the religious references that David and company make. It’s unclear just why Jerod is so different in this regard, but from how events play out, it’s easy to make guesses.

Not to be outdone by the gun-slinging men, Terra, a young girl from River’s Edge, gets caught up in the chaos surrounding the “river devil” but finds critical parts to play when the action gets going. She’s humorous and insightful, and a very well written strong-minded female. She, too, has her own tragic backstory which was teased but not fully revealed, and I’m curious to see how much her story will eventually shape the events to come.

The setting and theme were skillfully set. Whittaker keeps his characters in character the entire time – there were no slips of language falling out of the southern twang he writes, and the stream of ash/fire/burning exclamations he adds to the dialogue are a fun element that also shape these characters’ worlds. From alien creatures to futuristic inventions, readers are fully immersed in this steampunk world, and I, for one, am so excited to learn more about its past and how much more danger it holds. Bone Rippers, Death Walkers, guns, and various engines – there are so many creative elements that make up this post-apocalyptic steampunk setting, making it really fun to read.

Fortunately, Whittaker is working on a sequel, so we won’t have to wait too long for another installment in this fire-scorched world.
Read more

Ashley Needles
5.0 out of 5 stars It Jumps off the pages!
Reviewed in the United States on October 13, 2018
Prepare to be transported into another world! As an avid reader I love falling into stories, letting words weave a spell but this time, there was no falling nope it was far better than that! This book leaped off the pages like being in a haunted house and having the scariest monster jump out at you! This book lives and breathes full of characters with more life in them than most people! YOU MUST BUY THIS BOOK and READ IT!!!!!
Read more
One person found this helpful
Helpful
Comment Report abuse

Justin Gladstone
4.0 out of 5 stars Unexpected delight!
Reviewed in the United States on March 12, 2019
I would have never bought this book based on it's cover. It gave me a Western cowboyish vibe (which is something I never got into).

The old adage, 'never judge a book by its cover', comes into play because of the many great elements that Andrew has implemented in this book.

It's heavily action-packed but balanced well with thorough details and characteristics.

Read this if you're a fan of Zelda, Blood Omen, and superhero movies.
Read more
Helpful
Comment Report abuse
See all reviews