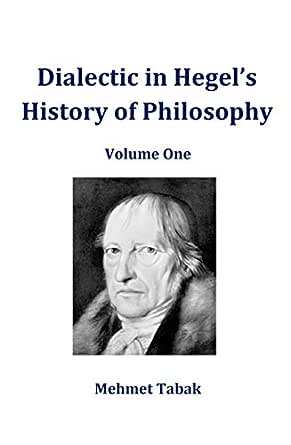 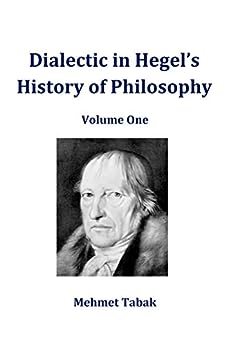 Dialectic in Hegel's History of Philosophy: Volume One Kindle Edition

MehmetTabak received his PhD from Columbia University (2004), and currently teachesat New York University. He is the author of Dialectics of Human Nature in MarxPhilosophy (Palgrave, 2012).

John Ryan
5.0 out of 5 stars The Most Comprehensive Exposition of Hegelian Philosophy
Reviewed in the United States on May 4, 2013
Verified Purchase
G.W.F. Hegel's philosophical system is the bane of graduate students, because his writings are some of the most notoriously difficult to comprehend. The reader is overwhelmed with all of the strange terminology--being-in-itself, being-for-itself, concrete, abstract, Absolute Spirit, Notion, Idea--that Hegel employs in novel and often contradictory ways. I had always wanted to begin reading Hegel, because his philosophical system remains instrumental in understanding the dialectical materialism of Karl Marx, which has been a primary focus of my graduate studies in political philosophy; yet I did not know where to begin my studies. Mehmet Tabak's "Dialectics in Hegel's History of Philosophy" provides the perfect starting point for delving into Hegelian dialectics.

"History of Philosophy" is the best place to begin teaching yourself Hegelian dialectics, because Hegel develops his own theory through the negation of other philosophies from Confucian to Platonic, and from the Medieval Scholasticism to German idealism of F.W.J. Schelling. In other words, you learn Hegel's system by reading him point out exactly what he believes to be wrong in other philosophical systems. Unfortunately, the "History of Philosophy" has been neglected by the majority of Hegelian scholars, even if it provides the most Hegelian method for learning Hegel himself--through the process of negation.

Tabak's book is the only comprehensive study of the "History of Philosophy". He provides the reader with a section-by-section analysis of Hegel's inquiry of the world's greatest philosophers. Instead of injecting his own beliefs, Tabak remains faithful to the text, acting as an unbiased investigator. He rigorously dissects the text and brings the crucial ideas and passages to forefront, so that the reader can comprehend the complicated dialectical reasoning of Hegel. So for example, in Hegel's section on Gorgias, Tabak presents his two ontological critiques and his epistemological critique. Then, he proceeds to examine their logic from Hegel's perspective. His method is one of explanation, quote and concluding explanation. It is an invaluable method for understanding the difficult arguments of ontology and epistemology. Without this method, you might yourself lost in the intricate philosophies Hegel engages with.

By learning what Hegelian dialectics is not, you will learn precisely what it is, and Mehmet Tabak will be there to guide you through the dark and perilous labyrinth every step of the way.

Ali R. Pharaa
5.0 out of 5 stars A much needed companion to Hegel's history of philosophy
Reviewed in the United States on May 16, 2013
I read this book for my class on Hegel's History of Philosophy. Tabak's clear and fluid style brings out Hegel's arguments and inconsistencies/contradictions, making Hegel accessible and rewarding. Best of all Tabak accomplishes his task of using The History of Philosophy as an intuitive context to grasp complex Hegelian concepts such as the Absolute, dialectics, the idea, and the system of Hegelian philosophy. This book is a must read for anyone tackling Hegel and particularly the History of Philosophy.
Read more
Helpful
Comment Report abuse
See all reviews from the United States