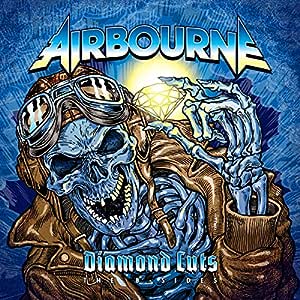 Full-tilt 15-track collection of B-sides from across their career, plus exclusive new songs "Money" and "Heavy Weight Lover"!

4.7 out of 5 stars
4.7 out of 5
173 global ratings
How are ratings calculated?
To calculate the overall star rating and percentage breakdown by star, we don’t use a simple average. Instead, our system considers things like how recent a review is and if the reviewer bought the item on Amazon. It also analyzes reviews to verify trustworthiness.
Top reviews

Erik Rupp
VINE VOICE
4.0 out of 5 stars B-Side Compilation? No Matter - This One Is A Must Have For Airbourne Fans!
Reviewed in the United States on May 19, 2018
Verified Purchase
Yes, this IS an album of B-Sides. Funny thing, though - these B-Sides are better than many of the songs on their last 3 studio albums. On it's own, forgetting that it's a compilation of B-Sides, this is the bands 3rd best album (after Runnin' Wild and Black Dog Barking). The songs are strong and there is a ton of energy on the album - and a surprising cohesiveness to the running order, even though the songs were written and recorded at different points in their career (of course, it doesn't hurt that like AC/DC and Motorhead there isn't a lot of variation in their style from album to album).

If you have any doubts as to whether or not to purchase this album, let me put them to rest - this is a killer, kick @$$ album that holds up extremely well against even the best albums in their catalog. If you like Airbourne (or AC/DC, Motorhead, Guns 'N' Roses, etc) then you'll like this album.

J. L. Stubblefield
4.0 out of 5 stars Rawk'n'roll
Reviewed in the United States on April 21, 2018
Verified Purchase
You know what you're getting when you buy an Airbourne album. Balls to the wall, high volume, bad decision making rock'n'roll!
Read more
3 people found this helpful
Helpful
Report abuse

Christopher T. Baker
5.0 out of 5 stars Airbourne earns an A for B-Sides
Reviewed in the United States on October 20, 2019
Verified Purchase
Awesome disc ... hard to believe these are “B-Sides”
Zoverstocks is always a great seller - A+

frank
5.0 out of 5 stars Real Rock n Roll right here
Reviewed in the United States on September 26, 2019
Verified Purchase
This is an awesome slab of Meat n Potatoes Hard Rock. If you like Airbourne you got to have this album!
Read more
Helpful
Report abuse

DMYNKEE
5.0 out of 5 stars Airbourne's Diamond Cuts
Reviewed in the United States on June 22, 2018
Verified Purchase
Great collection of hard to find B side stuff.
Read more
Helpful
Report abuse

allan tate
5.0 out of 5 stars Airbourne rocks
Reviewed in the United States on August 21, 2018
Verified Purchase
Good, old fashioned rock. The way it should be
Read more
Helpful
Report abuse
See all reviews

S. Lornie
4.0 out of 5 stars Just Sort of There
Reviewed in the United Kingdom on June 26, 2020
Verified Purchase
I recently had the urge to listen to some hard driving rock music. I had over played my AC/DC records and was looking for a change. This is when I went back to Airbourne. Realising I was a little behind on their albums, I bought their Breakin' Outta Hell album and the compilation album, Diamond Cuts - The B-Sides.

Diamond Cuts - The B-Sides is a compilation album released in 2017 via the Nettwerk Music Group label. The record is a collection of b-sides and bonus tracks from Airbourne's first three albums, Runnin' Wild (tracks 1-5), Not Guts, No Glory (6-12) and Black Dog Barking (13-15). The original release was a part of the band's Diamond Cuts box-set, which featured all three of the bands albums (at the time) and a documentary DVD. This set is still available on Amazon, if it's of any interesting.

The sound of the record is exactly what you'd expect from Airbourne. It's high speed rock n roll music held together but a hint of AC/DC and an amp load of distortion. Fans will no doubt love tracks like Stand and Deliver, Red Dress Woman, Kickin' It Old School and Loaded Gun. They're all reasonably catchy songs that made for enjoyable bonus tracks on the studio albums. As a complete collection though, I feel it has an issue. One big one. A complete and utter lack of diversity.

My main problem with this band is always their inability to try something new and Diamond Cuts - The B-Sides is the perfect example. Each song has literally the same tone, the same tempo and the same variation of chords. They're all fun enough songs and great to have blasting. But once you start thinking about it, they are all VERY similar and then it starts to get repetitive.

It's not like other bands whose b-sides which tend to be a mix of unused studio cuts, covers and live tracks, these are all original tracks that sound like they were left off for a reason. The album would have been strengthened a bit had the running time been shorter. As it is, Diamond Cuts - The B-Sides is a whopping forty eight minutes long, considerably longer than Airbourne's other CDs. Trim this record down to thirty five minutes or so and it would be a much better listen. Only problem then, we'd be missing some tracks which beats the point of the release.

Despite my issues with it, it's still FAR from a bad album. The songs that stick out are really good and despite the repetition, they're at least consistent in quality. The production is pretty smooth throughout. It's just as harsh as the bands other albums and fits like silky knickers on the bands back catalogues face. This is by no means a mandatory purchase but it's a good one if you like the previous albums.

Mr Blackwell
4.0 out of 5 stars ac'dc tribute to die for.
Reviewed in the United Kingdom on February 25, 2020
Verified Purchase
Fantastic idea to issue a selection of the bonus tracks from various editions of the ist 4 albums.This band are in a time warp (all good) AC/DC circa 77/78 and they have it down to a T,complete perfection.Stick it on and your feet will be tapping immediately and the grin permanent. fun fun fun ...enjoy

Now if we could just have a live 'double album' !!!!!
Read more
2 people found this helpful
Report abuse

Andrew Huntley
5.0 out of 5 stars many thanks
Reviewed in the United Kingdom on July 20, 2019
Verified Purchase
many thanks
Read more
One person found this helpful
Report abuse

Migetsu (FIN)
4.0 out of 5 stars Cuts like a knife
Reviewed in the United Kingdom on May 17, 2019
Verified Purchase
Airbourne just rock. It is a simple fact.
Read more
One person found this helpful
Report abuse

Mr. C. Sherratt
5.0 out of 5 stars Great cd for Airbourne fans
Reviewed in the United Kingdom on November 15, 2019
Verified Purchase
Great cd if you already have their other albums as there’s songs on here you won’t have.
Read more
Report abuse
See all reviews