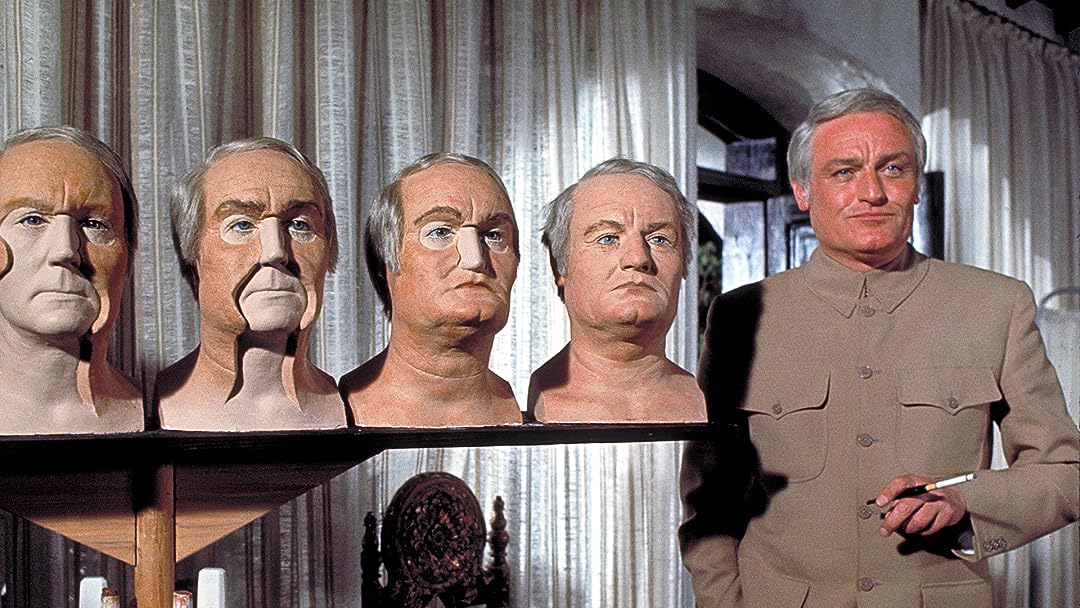 (2,023)
6.62h1971X-RayUHDPG
When 007 discovers that his evil nemesis Blofeld is stockpiling the world's supply of diamonds to use in a deadly laser satellite, Bond, with the help of beautiful smuggler Tiffany Case, sets out to stop the madman.

joel wingReviewed in the United States on April 2, 2020
4.0 out of 5 stars
Fitting exit for Sean Connery from the Bond series
Verified purchase
Diamonds Are Forever was the seventh James Bond film and the last with Sean Connery. He actually announced he was no longer going to do the series after You Only Live Twice, but after the experiment with George Lazenby in the lead didn’t work out in On Her Majesty’s Secret Service Connery was convinced to come back and do one more. SPECTRE leader Ernst Blofeld (Charles Gray) returned as the bad guy this time with a plan to put a laser into a satellite and hold the entire world for ransom. The movie gets its name from the fact that Bond initially gets involved in the case chasing smuggled diamonds, which are used for Blofeld’s laser. The movie was a fitting exit for Connery from the franchise because he really looked like he was aging out of the role.

The film has most of the elements associated with Bond movies by this time. There was a classy title track by Shirley Bassey and composed by John Barry. There were two Bond girls, first Tiffany Case (Jill St. John) who was working for the diamond smugglers and then becomes Bond’s companion. Also Plenty O’Toole (Lana Wood) who Bond meets at a casino in Las Vegas. Interestingly there were no real gadgets in this film. The movie was also unique for having two contract killers Wint (Bruce Glover) and Kidd (Putter Smith) who were gay lovers.

As for Connery he wore a hairpiece in all the Bond movies even the first one Dr. No. Here it was really apparent that he had a toupee on. He was also looking much older and this role called for someone with a more youthful look.

Still Diamonds Are Forever was a very good Bond film and was much better than the previous two in the series On Her Majesty’s Secret Service and You Only Live Twice.
C

Christopher R. ChristianReviewed in the United States on April 12, 2020
2.0 out of 5 stars
I wanted to like this.
Verified purchase
I really did. It has Sean Connery, it's a bond film. I love Sean Connery and Bond films. But the first villain apparently dies from having mud poured on him. He's laying in a 3' deep tub. This would have neither killed, or even wounded ANYONE. Even a toddler would have survived this, they probably would have enjoyed it. But somehow this man dies of it. What knocks him unconscious? Your guess is as good as anyone else's. Next, a guy dies from a scorpion sting. That's right, instantaneous fatality from a scorpion. NO ONE has ever died this way from a scorpion sting. Even if you are horribly allergic to bug stings your going to live for a while before dying of it. Not this guy, he couldn't have died any faster if you'd beheaded him with a katana. The two "henchman" may be the worst acting duo in the history of video entertainment. It's absolutely painful listening to them read their lines. I can't watch nonsense like this and enjoy myself. It's especially depressing after having watched From Russia with Love, which is a very good James Bond movie. How did we get from that to this??? I stopped watching at the Scorpion death. This movie somehow apparently gets a free pass because it came out in the '70's and it has the name James Bond in it. Or maybe because Sean Connery is in it. I can't believe he agreed to degrade himself with this trash. Unbelievably, there are people giving it 5 stars. They should be banned from rating movies.
3 people found this helpful

Ms LunaReviewed in the United States on August 29, 2019
5.0 out of 5 stars
We like 007.... having James Bond on hand = a 👍🏼 idea
Verified purchase
There is not one 007 Film we dislike. We have now collected every one on DVD.
We play them throught the year. Great fun, very UN PC... And frankly, unusual these days
....and that most of the fun . We get bored to seeing the same type of genre of films from today’s time period. Mixing it up it’s a good
7 people found this helpful

K. D. SitterReviewed in the United States on January 7, 2020
5.0 out of 5 stars
High quality for used CD
Verified purchase
As typical, I can buy "used" without loosing quality. Amazon sellers do a good job of selling good products even when used.
5 people found this helpful

Philip YReviewed in the United States on May 18, 2016
5.0 out of 5 stars
Blofeld forever!
Verified purchase
Quite possibly the best in the series. This film captured all the campiness and tom foolery of the early 70's. The re-watchability of this is exceptionally high. From Mr Wint and Mr Kidd to the "10 minutes and counting" guy, the casting is sheer perfection. I'm so glad Sean Connery came back to do this installment, Roger Moore would have, in my opinion been, too stiff.
18 people found this helpful

shancherieReviewed in the United States on March 25, 2020
5.0 out of 5 stars
The best Bond movie (except maybe Dr. No)
Verified purchase
This has always been my favorite Bond movie. I just love it! All of Connery and Moore's are exceptional, but this is simply my fave.
"I'm Plenty, Plenty O'Toole", "Named after your father, then?" I never got that one as a kid.
2 people found this helpful

Syd DithersReviewed in the United States on February 5, 2005
4.0 out of 5 stars
The First Campy 007
Verified purchase
According to my reading, 1969's ON HER MAJESTY'S SECRET SERVICE, the first James Bond film without Sean Connery, didn't live up to expectations (although I think it's one of the best of the series), so the producers lured Connery back to the role for a million dollars.

Connery, always incensed that the producers made the lion's share of Bond profits, asked for, received and then, out of spite, gave away the million dollars to Scottish charities.

Nobody cared about the payscale then: Connery was back as Bond and that's all that mattered.

Although the previous films had come close at times, DIAMONDS ARE FOREVER was the first flat-out camp take on the spy film. Connery looks like he's ready to roll his eyes at times and then having fun at others. The gay killers Wint and Kidd are very funny in several scenes (Bruce Glover, who plays Mr. Wint, is Crispin Glover's dad). Blofeld even shows up in drag at one point!

It's fun to see Las Vegas, circa 1971. During the car chase on Fremont Street, you can see the construction signs for the Union Plaza in the background. One daylight shot shows Bond driving a red Mustang past the Dunes...and he's immediately in open desert!

I still think the best Bond films are the first three, the one starring George Lazenby, and Pierce Brosnan's first outing.

But, like THE SPY WHO LOVED ME, DIAMONDS ARE FOREVER are among the most fun.

Good time had by all.
11 people found this helpful

Amazon CustomerReviewed in the United States on November 4, 2017
2.0 out of 5 stars
Not one of the Better Bonds
Verified purchase
Not one of the better Bond films with Sean Connery. You can tell that the film is becoming aware of itself. When Tiffany Case knows that "James Bond" is dead--actually another person killed by 007 who has give the stiff his ID--you know the film has become a parody of itself.
6 people found this helpful
See all reviews
Back to top
Get to Know Us
Make Money with Us
Amazon Payment Products
Let Us Help You
EnglishChoose a language for shopping. United StatesChoose a country/region for shopping.
© 1996-2021, Amazon.com, Inc. or its affiliates