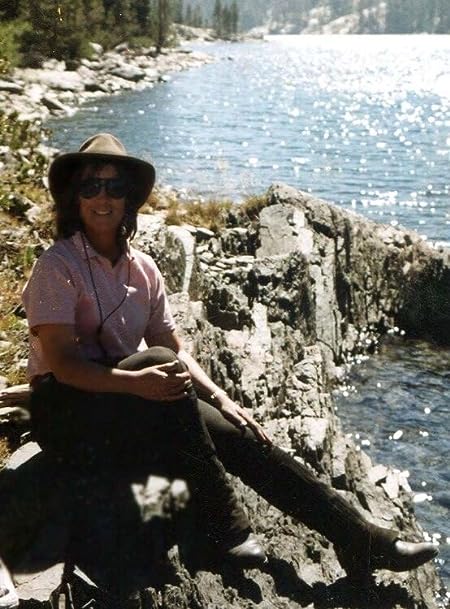 Born and raised in a Navy family, Diana (D M) grew up all over the United States, generally near the ocean. She now lives in New England with family and various pets.

After listening to her father’s ‘make-up stories’ at bedtime, she started writing her own and was thrilled when she learned that some people enjoyed them. Her first novel, written on lined paper and barely legible, was a story of the Hawaii of Kamehameha the Great. She has branched out considerably, writing about Ancient Egypt, 19th Century Paris and the American Civil War. She not above putting her unwitting ancestors in her Civil War-era stories.

You can sign up for her newsletter at www.dianawilderauthor.com

Diana is a proud member of the Historical Novel Society: ( https://historicalnovelsociety.org/ ) as well as the Alliance of Independent Authors: (https://www.allianceindependentauthors.org/ ) and is currently debating whether she should finish the next book in her Memphis Cycle series, a novella that is a fable set in ancient Egypt, or the second of her Orphan’s Tale Series. Whatever one she chooses, the next is due to be published in Autumn, 2016. 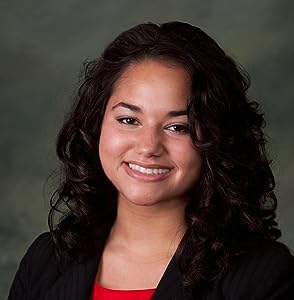 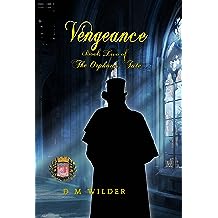 The most terrible criminals…have long memories.

Now that the threat of a war between England and France has been foiled, life can flow in peace again.

Malet and Elise are planning their Christmas wedding.

Larouche has found a place to live, where he can earn some money and, perhaps, find an occupation that will suit him. Since his employer and landlord is in no hurry to make him work, Larouche has a chance to learn about medicine while dealing with a pack of students with mayhem on their mind.

And then chaos descends as a police precinct is attacked by insurgents and its Chief Inspector is killed.

Malet's investigation leads him to some revolutionary students and, perhaps, a would-be master criminal who views Malet as a threat to be exterminated along with anyone he values. Suddenly the people that Malet holds dear are being attacked, and it is clear that he is marked for assassination, himself.

As the situation grows more dangerous, Elise is planning for their wedding, and Malet, under protective custody, is dealing with a troupe of bodyguards apparently recruited from the Sureté.

.…And who are the Watchers in the Shadows?

It should be a hectic Christmas.
Read more
Other Formats: Hardcover , Paperback 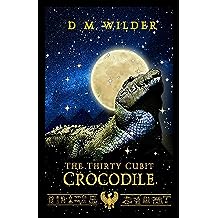 The Thirty Cubit Crocodile: A Fable From The Memphis Cycle Apr 27, 2021
by D M Wilder
( 2 )
$6.75
Kheti, once an Officer in Pharaoh's army, has returned from the wars wounded and reduced to scraping out a living for his family by fishing at night. One black midnight, exhausted, near despair, he cries out for help to the Gods of Egypt.

When the answer to his prayer comes hurtling out of the midnight sky to crash into the Nile, swamping his boat and scattering his meager catch, the assistance of the gods appears to be a curse rather than a blessing.

But appearances can be deceiving, as Kheti is about to learn.
Read more
Other Formats: Hardcover , Paperback 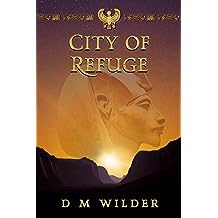 The City of Refuge: Book 1 of The Memphis Cycle Apr 20, 2011
by D M Wilder
( 53 )
$4.97
Once the glory of Akhenaten's reign, the imperial city of Akhet-Aten now lies tangled in the raveled ends of old plots; wrecked, abandoned and rumored to be cursed.

When Commander Khonsu is assigned to escort a royal delegation to the deserted capital to investigate reopening its quarries, he finds the task anything but routine, beginning with the expedition’s leader, Lord Nebamun, the second ranking priest of Ptah. Nebamun is a man without a past who has no fear of ghosts, curses or the damned spirits said to prowl the surrounding hills and scream in the night.

As Khonsu watches the man move through the echoes of old strife and treachery, he begins to realize that Lord Nebamun has come to put the spirits of the city to rest once and for all, whatever the cost to himself. But the question that grips Khonsu, as the shadows thicken and the threat intensifies, is whether Nebamun might be a danger to them all.

THE CITY OF REFUGE, set in Egypt after the fall of Akhenaten, is a tale of revenge and renewal, and one man's discovery that the Paths of Righteousness may lie through peril, but they will always bring you home.
Read more
Other Formats: Hardcover , Paperback 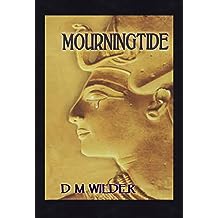 Mourningtide: Book Two of the Memphis Cycle Jan 13, 2014
by D M Wilder
( 23 )
$4.97
Eighteen years have passed since Seti commanded the Royal Army in The City of Refuge. Now he rules Egypt as King.

While Seti is far away to the south, his eldest son is ambushed and killed through a senseless mistake. His family sends word, but it is not delivered.

Seti returns to learn that his son is sealed away in a tomb. With grief weighing heavy upon his heart and yet constantly under his subjects' gaze, Seti cannot bear his grief.

He seeks peace and healing in a small village only to learn that marauders from the western deserts have been attacking the town, which is helpless to resist them.

During that short summer, the greatest warrior king of that dynasty teaches them the art of battle and in his turn learns of companionship, kindness and courage.

\Mourningtide, the second book of The Memphis Cycle, is a story of loss, renewal and love set against the background of the Valley of the Kings.
Read more
Other Formats: Hardcover , Paperback 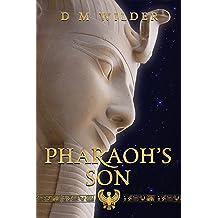 Pharaoh's Son: Book 3 of The Memphis Cycle Dec 5, 2013
by D M Wilder
( 44 )
$4.97
The crash of Pharaoh's colossal statue into a throng of worshippers brings the festival of the good god Ptah of Memphis to a sudden, bloody end. Prince Khaemwaset, the High Priest, barely escapes with his life. He finds clues in the wreckage that show that the disaster was deliberately set. Now he is confronted with questions that grow more alarming with every answer he finds as the great temple of Ptah is rocked by a chilling series of murders.

Increasingly entangled in clues that lead to even more mysteries, convinced that the gods themselves are taking a hand in the disaster, he appeals to Pharaoh for help and is sent a powerful ally in his eldest brother Hori, Egypt's Crown Prince, whose intelligence, courage and cunning are offset by a devastating bluntness.

The brothers fight against time as they try to unravel the mystery, knowing that there is more at stake than treasure, and the forfeit is greater than a man's life:

Something great and terrible is stirring, something hidden deep within the temple, something they must find and bring into the light before those who walk in darkness take it and turn it to evil.
Read more
Other Formats: Hardcover , Paperback 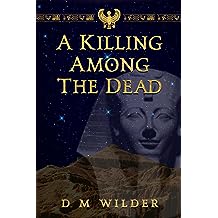 A Killing Among The Dead: The Last Book of the Memphis Cycle Dec 5, 2013
by D M Wilder
( 24 )
$4.97
Wenatef, an officer and Kinsman high in Pharaoh's service, has been assigned to guard the workers at His Majesty's tomb while it is under construction. Troubled by whispers of robbery and corruption among the tomb workers, themselves, but excluded from their counsels, he finds himself fighting shadows until the night he awakens in utter darkness with the taste of blood in his mouth, his life ebbing into silence.

Wenatef crosses the boundary between life and myth. He had been told "You can't fight these monsters alone. You would have to go to the Land of the West and return with an army." Did he die? Did the gods really step in and take part in unmasking the corruption? Perhaps they did.

Armed with the might of the West, he sets out to destroy the robbers and blasphemers and right an old wrong.

Set during Egypt's declining years, A Killing Among the Dead is a tale of betrayal, revenge and redemption, and one man's discovery that no matter how alone we seem in our struggle against evil, the Great Ones are never far away.
Read more
Other Formats: Hardcover , Paperback 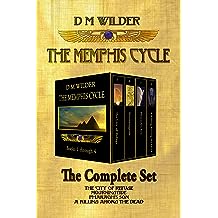 The Memphis Cycle Boxed Set: The City of Refuge, Mourningtide, Pharaoh's Son and A Killing Among the Dead Sep 30, 2017
by D M Wilder
$6.99
THE CITY OF REFUGE:
Assigned to guard a royal delegation on a visit to Akhenaten’s abandoned capital, Commander Khonsu soon realizes that the greatest threat may come from within the party. Lord Nebamun's determination to destroy the ghosts of the past may be the worst danger that he faces.

MOURNINGTIDE
While Seti is far away to the south, his eldest son is ambushed and killed through a senseless mistake. With grief weighing heavy upon his heart and yet constantly under his subjects' gaze, Seti cannot bear his pain. He seeks peace and healing in a small village only to learn that marauders from the western deserts have been attacking the town, which is helpless to resist them. During that short summer, the greatest warrior king of that dynasty teaches them the art of battle.

PHARAOH’S SON
Something great and terrible is stirring, hidden deep within the temple, something that must be found and brought into the light before those who walk in darkness take it and turn it to evil.

A KILLING AMONG THE DEAD
A tale of betrayal, revenge and redemption, and one man's discovery that no matter how alone we seem in our struggle against evil, the Great Ones are never far away.

Readers who enjoy Pauline Gedge, Michelle Moran, Christian Jacq and Wilbur Smith will enjoy the books of The Memphis Cycle. 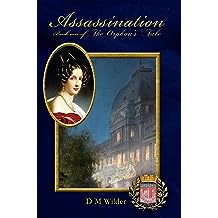 Assassination: Book I of The Orphan's Tale Apr 28, 2021
by D M Wilder
( 37 )
$6.99
The most terrible criminals…don’t need to hide.Life on the streets of Paris is not easy for most people, but for seven-year-old Larouche, it is all he has known. He may be small and young, but he’s clever. He gets by, relying on his wits. Everything is fine until he crosses paths with Chief Inspector Paul Malet.Malet has no time for the urchin’s mischief. He can feel a growing menace:England's Heiress Apparent, Princess Victoria, will be traveling to Paris at Christmas for a state visit. It is a crucial time for France. The Princess’ safety must be guarded.Malet senses a plot brewing?And why did he pick now to fall in love?You’ll love this well-researched Historical adventure, because the mystery intrigues, the romance entices, and the twists keep you turning the pages.
Read more
Other Formats: Kindle , Hardcover , Paperback 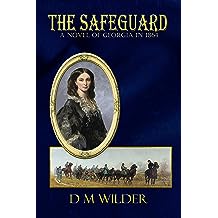 The Safeguard: A Novel of Georgia in 1864 Nov 27, 2013
by D M Wilder
( 18 )
$7.75
Lavinia Wheeler had watched as war had torn her world apart over the past three years When the Civil War comes to her doorstep, her generosity in opening her house as a hospital brings a change in her life far beyond any blessing she could have dreamed of or asked for.

Changes come with a price: between dealing with the Yankee-hating townsfolk, her former slaves, a passel of wounded Yankees, a government that takes a dim view of people who aid the enemy, and a group of raiders that is ravaging the countryside, Lavinia isn't sure that she has timeto care for herself.

Cavalry Sergeant Asa Sheppard was given the assignment to guard Miss Wheeler's treasures as a way to let him rest from the wound and exhaustion that had nearly sapped his will to live. Dealing with the peppery woman and facing the dangers beside her cures his wounds. He wonders if it will drive him mad.
Read more
Other Formats: Hardcover , Paperback