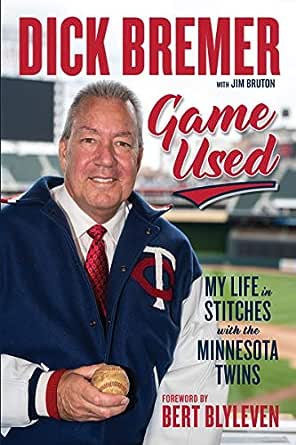 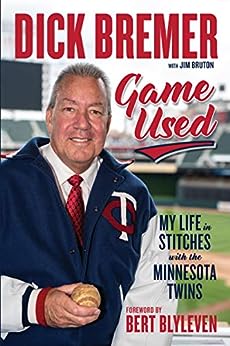 Dick Bremer has been the lead television announcer for the Minnesota Twins since 1983. He has also called basketball, football, and hockey games for the University of Minnesota. Bremer was inducted into the Minnesota Broadcasting Hall of Fame in 2013. Jim Bruton is the author of several books, including A Tradition of Purple, Gopher Glory, We Love Our Twins, and The Big House. Jim is an adjunct faculty member at several colleges and universities in the Twin Cities.

Bert Blyleven spent 22 seasons pitching in the major leagues, 11 of them with the Minnesota Twins. He is currently a color commentator for the team alongside Dick Bremer. He was inducted into the Baseball Hall of Fame in 2011.

5.0 out of 5 stars
5 out of 5
52 customer ratings
How does Amazon calculate star ratings?
Amazon calculates a product’s star ratings based on a machine learned model instead of a raw data average. The model takes into account factors including the age of a rating, whether the ratings are from verified purchasers, and factors that establish reviewer trustworthiness.
Top Reviews

M. T. Manning
5.0 out of 5 stars Best 9 innings I’ve ever read!
Reviewed in the United States on March 30, 2020
Verified Purchase
There were inning that had me in stitches and innings that had me in tears. The stories and behind the scenes musings had me riveted. I read straight through the first 8 innings, when I decided to pause because I wasn’t ready to have it end. (The delay lasted until the next morning when I grabbed it before my coffee was even ready.). I’ll likely re-read this several times! I’d recommend this book to anyone who loves the Minnesota Twins!
Read more
8 people found this helpful
Helpful
Comment Report abuse

LSmithTop Contributor: Baseball
5.0 out of 5 stars Fellow Twins fans will love this book
Reviewed in the United States on April 3, 2020
Verified Purchase
Dick Bremer has been the primary voice of Minnesota Twins telecasts since 1983. In those 37 seasons, he has been able to collect a lot of memorable stories about the team, broadcast partners, adventures on the road and even some about his personal life. He shares 108 of them in this memoir – 108 to match the number of stitches on a baseball.

The book is a walk through Bremer's life, from his childhood when he was raised in rural western Minnesota by adoptive parents, to their move to Missouri and back to the Midwest. The reader will also learn about Bremer's early adventures into broadcasting when he was getting his early experience in college and smaller games. Through them all, he shares his stories with equal parts of humor and fondness at the memories.

Anybody who is a fan of not only the Twins, but of Minnesota sports will recognize Bremer's deep baritone voice as he has done not only the Twins games, but has also broadcast games for the Minnesota North Stars (hockey) and University of Minnesota (football and basketball) as well as provide coverage for many other sports as well. But it is clear to the reader that Bremer's first love is baseball, especially with his stories about watching Twins games before he became their broadcaster.

The humor Bremer is noted for in the broadcast booth is clearly evident in his broadcasting and baseball stories as well. One of the funniest stories in the book is when he feared that when trying to pull a prank on his long-time booth partner Bert Blyleven, he lost Blyleven's wedding ring. Another great story involves Blyleven as Bremer tried to explain that the cheeks of a walleye are the best tasting part of the fish. He invited former Twins player Kent Hrbek, who had retired for several years when this took place, to join them. When Bremer had the food that he had earlier prepared brought to the booth, Hrbek thought they were all for him and he gobbled them up leaving none for Bremer to share with Blyleven. While this may not sound so funny, to read it in the book (especially to imagine Bremer's voice while reading) is hilarious.

The baseball memories Bremer shares are excellent as well. Twins fans will love to read about the championship seasons of 1987 and 1991 with a special fondness for the unexpected rally for the 1987 team when they returned to Minnesota after winning the American League pennant in Detroit. The struggles of the team in the early '80s and mid '90s are also shared, in sharp contrast to the good memories of the teams in the 2000's that won several divisions but just couldn't go farther in the postseason. Issues affecting the team off the field, such as two different threats to move the team, contraction talk in 2001 by the Commissioner and finally the opening of Target Field and some of the better memories of games there complete Bremer's thoughts on the team and his career.

If the reader is a Twins fan, as this reviewer has been his entire life, then this book is one that must be added to the bookshelves It is an excellent reflection of not only Twins baseball, but the man who has been the voice of the team for almost four decades.

Toby Martin II (aka R. Howe)
5.0 out of 5 stars A Memoir by Twins Broadcaster Dick Bremer
Reviewed in the United States on April 14, 2020
Verified Purchase
This is an informative and enjoyable book for anyone, and especially
for baseball fans and followers of the Minnesota Twins.

Dick Bremer has, for nearly four decades, been the television
voice for the Twins; and is regarded by many to be one of the best and
most knowledgeable sports announcers anywhere for his insightful
play-by-play coverage and commentaries on his broadcasts.

This memoir is filled with colorful anecdotes, many of which are
laugh-out-loud humorous incidents; and he also writes about the sad memories, such as the passing of Twins icons Harmon Killebrew and
Kirby Puckett.

The book gives baseball fans an inside look from the broadcast
booth and other behind-the-scenes accounts of the many activities which
go into the development of a professional sports team--like the Twins, a team which won baseball’s World Series championships in 1987 and 1991.

Dick Bremer, who grew up in small towns within Minnesota, has
written a memoir which gives baseball fans, and others, a nostalgic look back, providing a greater appreciation of the sport’s many challenges and
the outlook ahead.

Bill
5.0 out of 5 stars Required reading for all Twins fans
Reviewed in the United States on May 1, 2020
Verified Purchase
I was expecting yet another book from a ghost writer who had interviewed the subject and then gave us mostly stories we had heard before. Not so with this highly entertaining book. It reads as if Dick Bremer himself wrote it with maybe a little help.

In almost every stitch (chapter) there is an anecdote that the public has never heard. My favorite might be the one about Dick’s son, Erik, and former Indiana basketball coach Bobby Knight. Kirby Puckett provided a number of them too.

My only qualm is Dick’s admiration for legendary Yankees announcer Mel Allen. One of Dick’s regrets is that network announcers take over the broadcasting for post season games. He tells about the time years ago when a team announcer would be added. Like many others, I can clearly recall running the two blocks home from school to catch the end of a Series game. One of those times Mel Allen described a left fielder as leaping high against the wall and making a great catch. Mel had forgotten he was on TV, not radio. The left fielder was standing on the edge of the warning track. I always had a hard time watching This Week In Baseball after that.

I’m glad I purchased this terrific book online rather than going to the local library. I know I’ll be going through it again.
Read more
Helpful
Comment Report abuse

R. COLLINS
5.0 out of 5 stars Fantastic read!
Reviewed in the United States on May 26, 2020
Verified Purchase
For any Twins fan who has followed the team from the 70s to today, this is an absolute gem. I worked for the Twins for some 13 seasons, 6 of them in the front office. It was so great to hear another point of view to things I’d experienced during my time there. The concept of “stitches” coming together to deliver a complete story about this great game is just great. Dick always treated me with nothing but respect when we would encounter each other at the Dome and he is an absolute class act in every way. We even got to hang out with Harmon Killebrew on Caravan in 2001. I’ll never forget driving back from Winnipeg with Dick and Harmon and the look on the border agent’s face when I told him who was in the car with me. A priceless moment for me. Thank you Dick for taking me on a great journey from your childhood to the great broadcaster you are today. During this time when there are no games being played I certainly needed it.
Read more
One person found this helpful
Helpful
Comment Report abuse
See all reviews from the United States

RT
5.0 out of 5 stars Excellent
Reviewed in France on April 29, 2020
Verified Purchase
A "MUST-READ" for any Twins fan.
Read more
Helpful
Sending feedback...
Thank you for your feedback.
Sorry, we failed to record your vote. Please try again
Report abuse