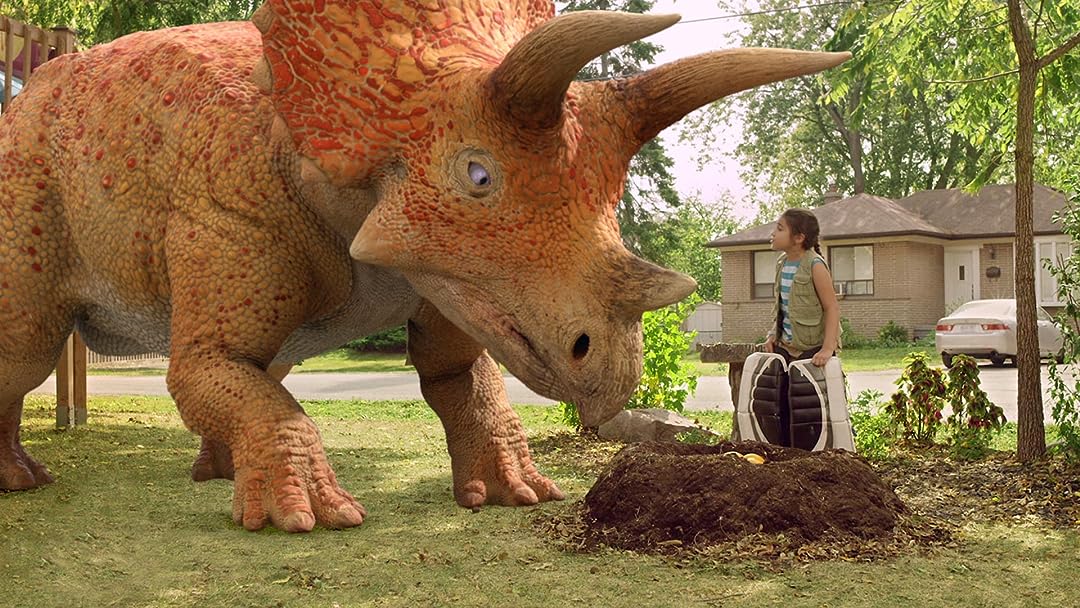 (142)
7.12019X-RayALL
The Dino Dana family is expanding! This season, Dana becomes a big sister when her brother Dexter is born. A baby isn’t all that’s new in Dana’s world. She encounters her very first Terror Bird, the Titanis, and history’s smallest sauropod, the Europasaurus! With new dinos and humans, Dino Dana Season 3 is fun for the whole prehistoric family!

Nattie BerryReviewed in the United States on August 14, 2019
5.0 out of 5 stars
100% Love it!
Our Little is obsessed with the Dino Dan/Dino Dana world! In the past year, we've watched every single episode of both dozens of times.
Fully educational, teaches about dinosaurs (obviously) but also the science involved is fantastic! Our 3 year old does dino experiments daily and tells us about his hypotheses and asks about ours. No joke!
We were very excited when season 3 came out! I had made the mistake of showing him the preview trailer a couple of weeks before it was released... He asked about it every day... Every single day.
He loves the "new" animals that are being introduced. His favorite from the new season is the Gigantoraptor but the Wooly Mammoth seems to be closing in for the top spot.
Thank you for continuing the series and for including older characters that we recognize from the original shows.

Keep up the amazing work!

They don't like this season. I think the weird, usually extravagant costumes are kind of creepy to kids. (Hatching from eggs and dressed like creepy 80's sitcom dinosaurs, you know.) I think the budget was just cut and they had to resort to less animation, therefore resulting in costumed actors.

In previous seasons there was always an easy to make connection to the imaginary world of Dana. This season stretches that a bit and goes the forlorn way of Gilligan's Island. In Gilligan's Island they ran out of ideas, so they had large portions of their later episodes "daydreamed." Dino Dana has taken that route, where instead of just imagining things as she goes about her daily life, she "daydreams" dinos into her world with weird scenarios (police officers, etc).

It's forced and isn't as interesting to my kids.

They'll watch it, but they want the older episodes.
4 people found this helpful

Shelley JeromeReviewed in the United States on August 1, 2019
5.0 out of 5 stars
TERRIFIC SHOW!!!
So much children’s programming is puerile drivel. It is so rare to find children’s programming that is engaging and filled with useful information. My daughter loves dinosaurs, space, and math games. This show is an excellent stimulus for her love of palaeontology. What I love about this show is the family members find time to pay attention to each other. They do not talk down to the main character or question her interactions with long extinct dinosaurs in “real life”. Dino Dana is now our evening tradition before bedtime. Dad, Mom, and munchkin all snuggle up for a dinosaur adventure together as we all learn about dinosaurs. The family room is strewn with dinosaur action figures, the dino-pedia, and several other dinosaur books. Please make many many many more seasons of this terrific show.
6 people found this helpful

John BecknellReviewed in the United States on July 28, 2019
5.0 out of 5 stars
Wonderful
My daughter loves this show. And I have to admit that the family she has in the show is very endearing. Heck, when Mr. Hendrickson was in the museum with Dana, remembering when he and his wife used to visit, and Dana made a helper's toolbelt for him, I might have even wiped my eye a time or two--but don't tell my daughter that. Definitely recommended. My daughter wants me to tell you to make 10 more seasons, please.
7 people found this helpful

TiffanieReviewed in the United States on August 14, 2019
5.0 out of 5 stars
DINO-TASTIC
This show is my boys favorite. They learn so much, they see a super smart girl teaching everyone about a fun fascinating subject of Dinosaurs and prehistoric reptiles. I love how the Mom and Dad are so loving, supportive, and don't fall into the traditional parents trope of a kids show. Saara and Dana have wonderful chemistry, new baby Dexter is adorable. Key the Dino Dexter in a few years. That being said, this is a show I am fine if it is on constantly. I just wish there was more swag because my son wears his Dino Dana shirt so much it is starting to fade.
4 people found this helpful

Risa JoyReviewed in the United States on July 28, 2019
5.0 out of 5 stars
Strong female lead that loves dinosaurs! Watch this!
Thank you Amazon for providing a strong female dino loving young woman times 3! This show is the main reason my 3 year old daughter is a paleontologist. The story lines are engaging for adults and children. I love the cohesiveness of all the characters from Dino Dan and Trek. If your child loves (or has the slightest interest in dinosaurs) watch this. Please keep the great content coming. We love Dino Dana!
7 people found this helpful

Alyssa S.Reviewed in the United States on August 16, 2019
5.0 out of 5 stars
Dino love for everyone
Dino Dana is a favorite in my household. Dana isn't perfect she's more realistic. She gets very into her dino experiments which can get her in trouble. But her family is there to help get along the way! My little daughter is obsessed with dinosaurs right now and it's nice to have a show with a girl that also loves dinosaurs and wants to grow up to be a paleontologist! Boys and girls alike will enjoy the show along with the parents which is why it's so great!
3 people found this helpful

John-Michael PhillipsReviewed in the United States on August 15, 2019
5.0 out of 5 stars
GIrl's like Dinos Too!
We absolutely love this show! Dana is a quirky Dino-obsessed little girl, but she is a strong little girl role model. I have a daughter who loves dinosaurs and while she loved Dino Dan (Dan and Trek) Dana is way easier for her to relate to and that just makes me happy. We had the hardest time finding girl Dino gear and would end up buying boy Dino stuff and my daughter was happy to wear it. But ever since Dino Dana surfaced we feel like we've seen more and more Dino-Girl stuff. I personally attribute that to Dino Dana. So thank you for being a good Dinosaur show that all kids can watch but more importantly thank you for being a show that encourages a girl to outwardly express they like Dinosaurs and that they can do Science stuff and still be a girl.
One person found this helpful
See all reviews
Back to top
Get to Know Us
Make Money with Us
Amazon Payment Products
Let Us Help You
EnglishChoose a language for shopping. United StatesChoose a country/region for shopping.
© 1996-2021, Amazon.com, Inc. or its affiliates