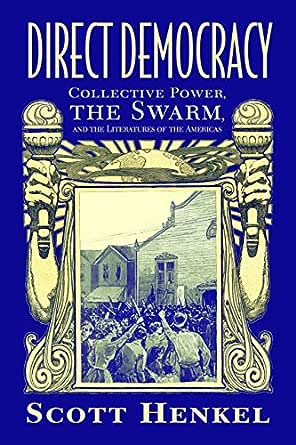 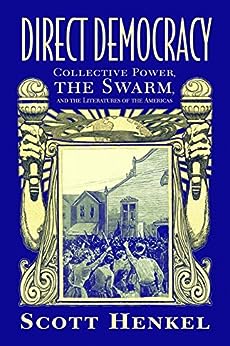 [A]n excellent intervention on behalf of scholars of the revolutionary Atlantic World, one which uses literature to center voices that have been marginalized by traditional scholarship on revolution. (Radical Americas)

Direct Democracy: Collective Power, the Swarm, and the Literatures of the Americas is provocative and a new catalyst that reminds us there are literatures that motivate movements and communities. They offer models of experimentation and alternative approaches to the injustices and inequalities of the world in which we live. (Rocky Mountain Review)

Direct Democracy does a great service to anarchist politics in several ways. It helps to identify anarchist trends in politics that are easily conflated with archist forms of politics (although Henkel does not employ the language of anarchism and archism per se). By keeping his eye on the subtler forms of direct democracy (what Spinoza calls ‘absolute democracy’) and by refusing attempts to redefine that power out of existence, Henkel helps to identify and promote the anarchist kernel of politics. Furthermore, he helps to ensure that the radical nature of direct democracy is not limited to western models but is also located in radical traditions in African American, Latin American and Caribbean politics and literature. (James Martel, San Francisco State University Anarchist Studies) --This text refers to the paperback edition.

Scott Henkel is director of the Wyoming Institute for Humanities Research and associate professor in the Department of English and the Department of African American and Diaspora Studies at the University of Wyoming. His research has appeared in the journals Walt Whitman Quarterly Review; Workplace: A Journal of Academic Labor; and Chiricú Journal: Latina/o Literatures, Arts, and Cultures, as well as the edited volumes Problems of Democracy: Language and Speaking and The Grapes of Wrath: A Reconsideration. --This text refers to the paperback edition.

Inspired by the incomparable C. L. R. James, Scott Henkel explores the 'swarm' of humanity in the literatures of the Americas, illuminating its deep but often hidden democratizing power to shape the course of history. Here is a timely book for a new age of resistance. (Marcus Rediker, coauthor of The Many-Headed Hydra: Sailors, Slaves, Commoners, and the Hidden History of the Revolutionary Atlantic)

Direct Democracy is an exhilarating investigation of collective political action in the Americas. Marshalling a broad range of theoretical resources, Henkel focuses on the concept of the swarm to construct a protean literary history and theory of collective insurgency since the Haitian Revolution. With elegance and erudition, Direct Democracy argues incisively for a novel conceptualization of collective action, resistance, and direct democracy equal to the challenges of the present age. (Nick Nesbitt, professor of French at Princeton University; author of numerous books and articles, including Caribbean Critique: Antillean Critical Theory from Toussaint to Glissant)

Henkel outlines a new approach to the role and potential of collective action and the concept of power to analyze a variety of intersecting class struggles that have traditionally been viewed within distinct racial and gender boundaries. His interdisciplinary approach combines literary and historical analysis in a way that brings alive the complexity and interconnectedness of a variety of struggles for basic human rights.

bookwomen37
4.0 out of 5 stars Direct Democracy as a Power in Literature
Reviewed in the United States on November 29, 2017
The author offers an interesting perspective of Direct Democracy through Literature. The author does a good job of trying to support his argument that Direct Democracy is a form of power and offers examples of literature. The strongest parts of the book were those dealing with the Haitian Revolution. I really enjoyed the chapter of the long forgotten Lucy Parsons and I wish more information was available about her. I enjoyed reading the book.
Read more
One person found this helpful
Helpful
Report abuse
See all reviews