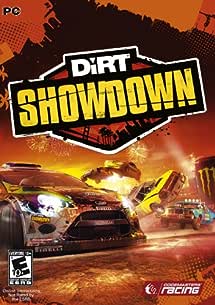 Brand: Codemasters
Platform : Windows Vista, Windows XP, Windows 7 |
Rated: Everyone 10+
| DRM: Steam
2.3 out of 5 stars 4 ratings
Currently unavailable.
We don't know when or if this item will be back in stock.
Note: After purchase, you can access the item in Your Games Library.
By placing your order, you agree to our Terms of Use.
This product is non-returnable and non-refundable.
Note: Currently, this item is available only to customers located in the United States.
Download size: 3 KB
Download time: 0 seconds on broadband, 0 seconds on dial-up

Race, crash and hoon your way through a world tour of motorised mayhem in DiRT Showdown! Crowd atmosphere, social gameplay and accessibility are all ramped up in this turbo- injected shot of driving delirium. Smash down the accelerator and earn the adulation of frenzied crowds at hyper-energised events at iconic locations. Trick, speed and smash your way to victory, then do it again.

Use boost to blast past your rivals in races, unleash your inner hoonigan in huge freestyle, free-roaming stunt parks and see gaming’s most advanced damage engine pushed to its limits in devastating demolition derby events. DiRT Showdown is also Codemasters’ most connected game ever - split-screen multiplayer, 8 player online racing, on and off-line quick-fire party games, Showdown challenges and YouTube integration all come as standard. Get your ticket for this stunning new world of accessible action-sports racing from the makers of the award-winning DiRT series.

2.3 out of 5 stars
2.3 out of 5
4 global ratings
How are ratings calculated?
To calculate the overall star rating and percentage breakdown by star, we don’t use a simple average. Instead, our system considers things like how recent a review is and if the reviewer bought the item on Amazon. It also analyzes reviews to verify trustworthiness.
Top reviews

Matt
4.0 out of 5 stars Silly fun! Very arcady racing game
Reviewed in the United States on November 27, 2015
I'm a big fan of Codemaster racing games. I've played Dirt 2 and 3, Grids 1 and 2, F1 2012, Grid Autosport, etc. Dirt Showdown is the most recent game I've played in the series. And while it's different from other Codies games, its definitely worth your time -- especially because it can be had so cheaply these day. (You can currently get it in the $1 tier of the Humble Bundle as of 11/27/15).

So, what's Showdown like? If you remember those old radio and TV commercials with the announcer who shouts "Sunday! Sunday! Sunday!" it's that game. Unfortunately there are no monster trucks (I wish they were in this game!), but there's plenty of other good, fun racing. It follows the tried and true progression method of gaming: you race your up from Rookie league to Legends league. To do this you simply have to win races and buy faster and stronger cars.

There's a wide variety of races and events to be had: regular races, rampage (demo derby), hard target (you vs the world demolition derby style), 8 Ball (racing a figure 8 track), elimination, domination, etc. The gimmick in Showdown is boost/turbo/nitrous which gradually refills after use. You'll see some recycled tracks from other Codemasters games, but there are a lot of new tracks, too.

It's not a particularly long game. You can probably complete the career mode in under 6 or 7 hours, but since the game is so cheap, it's still a good deal. I don't think it's a game for everyone, but if you're looking for a casual, arcady racer, Showdown is a great addition to your library.

D. Lopez
3.0 out of 5 stars Nothing like Dirt, Dirt 2, and Dirt 3
Reviewed in the United States on September 8, 2013
Dirt Showdown is nothing like the previous Dirt games. There is little to almost no racing involved. Most is just derby driving, racing with derby aspects, and doing stunts. I got this game free with my purchase of an A8-3870k and for the first game that I installed on my computer, what is there to complain about it. It was free, but I would not pay to play this game. I would rate it 2 stars but it was free to me so that gave it an extra star. If your looking for off road racing look at any of the Dirt 1-3. If your looking for a derby game, I'm guessing this is for you.
Read more
Helpful
Report abuse
See all reviews
Pages with related products. See and discover other items: split screen games in video games