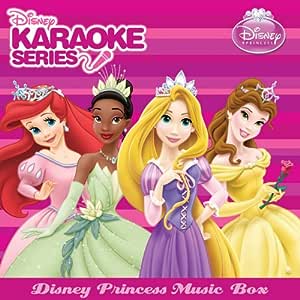 Save with Used - Good
$8.03
FREE Shipping on orders over $25.00 shipped by Amazon.
Arrives: Monday, Feb 1
Ships from: Amazon
Sold by: Jenson Books Inc

Disney Karaoke Series (Artist) Format: Audio CD
4.5 out of 5 stars 636 ratings
Amazon's Choice recommends highly rated and well-priced products.
Amazon's Choice for "disney princess music box"
See all 4 formats and editions Hide other formats and editions
Includes FREE MP3 version of this album.&nbspProvided by Amazon Digital Services LLC. Terms and Conditions. Does not apply to gift orders.&nbspComplete your purchase to save the MP3 version to your music library.
Available at a lower price from other sellers that may not offer free Prime shipping.

4.5 out of 5 stars
4.5 out of 5
636 global ratings
How are ratings calculated?
To calculate the overall star rating and percentage breakdown by star, we don’t use a simple average. Instead, our system considers things like how recent a review is and if the reviewer bought the item on Amazon. It also analyzes reviews to verify trustworthiness.

1. I See The Light (Tangled)
2. Almost There (Princess and the Frog)
3. Happy Working Song (Enchanted)
4. Part of Your World (The Little Mermaid)
5. Beauty and the Beast (Beauty and the Beast)
6. When Will My Life Begin (Tangled)
7. Colors of the Wind (Pocahontas)
8. Reflection (Mulan)

It wasn't until I opened the cd case, that I saw the words "Songs Are Female Solos" printed on the back of the lyrics booklet - it is not written anywhere on the outside packaging. What this means is the karaoke version of the duet "I See The Light" has male (Flynn) vocals included, and NO lyrics on screen during that part of the song. Interestingly, the male (Flynn) lyrics ARE included in the lyrics booklet. I was disappointed in this and would have liked to have known in advance that this track isn't a true duet.

The visual graphics and on screen lyrics are pretty standard (simple), but I've never seen karaoke that isn't. Overall, we enjoyed the songs on this disc and look forward to singing them often. Though I will have to purchase another, true duet version of "I See The Light," I am happy with my purchase.

waltbobjr
5.0 out of 5 stars Nieces Love the Songs
Reviewed in the United States on February 2, 2020
Verified Purchase
Bought this to go with a Christmas karaoke machine gift to my nieces. They love the songs, both with and without lyrics. No complaints that the songs with lyrics are not sung by original artists.
Read more
2 people found this helpful
Helpful
Report abuse

Cameron
2.0 out of 5 stars Not the song versions from the Disney movies
Reviewed in the United States on December 29, 2019
Verified Purchase
Not the original songs from the movies, the vocals are done by other people and the music sounds off. I didn’t see this mentioned anywhere in the description, but they sure do have the Disney logo plastered all over it so I assumed they’d use the original Disney versions. Very disappointed.
Read more
2 people found this helpful
Helpful
Report abuse

Melissa K
5.0 out of 5 stars Five Stars
Reviewed in the United States on May 22, 2018
Verified Purchase
My daughter loves this but was disappointed that the voices aren’t the movie versions.
Read more
3 people found this helpful
Helpful
Report abuse

K. Flynn
5.0 out of 5 stars Love it!
Reviewed in the United States on February 1, 2019
Verified Purchase
Perfect addition to my daughters karaoke machine. I love the song selection and that you can have it with words or just the music. I wish the lyrics were included though.
Read more
Helpful
Report abuse

Bruce Johnson of JohnSongs
5.0 out of 5 stars Entertaining CD encourages singing and is down right fun.
Reviewed in the United States on April 19, 2017
Verified Purchase
My younger granddaughters love this! They sing along. Sometimes they dress up to get even deeper into the mood.
Read more
2 people found this helpful
Helpful
Report abuse

Paws forever
5.0 out of 5 stars Five Stars
Reviewed in the United Kingdom on January 6, 2017
Verified Purchase
My granddaughter loves this sings along beautifully.
Read more
One person found this helpful
Report abuse