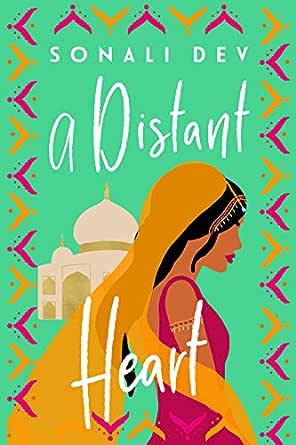 You've subscribed to Bollywood! We will preorder your items within 24 hours of when they become available. When new books are released, we'll charge your default payment method for the lowest price available during the pre-order period.
Update your device or payment method, cancel individual pre-orders or your subscription at
Your Memberships & Subscriptions
There was an error. We were unable to process your subscription due to an error. Please refresh and try again. 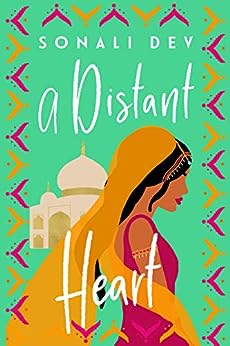 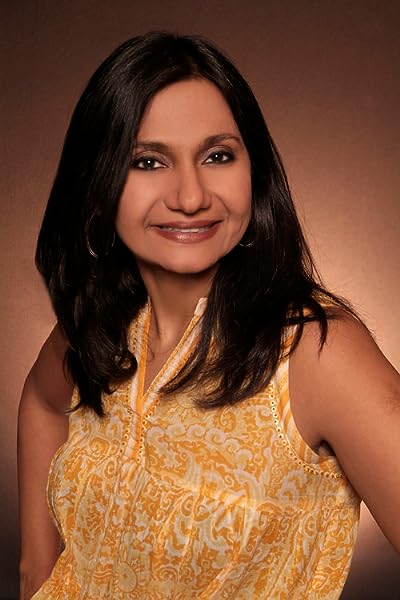 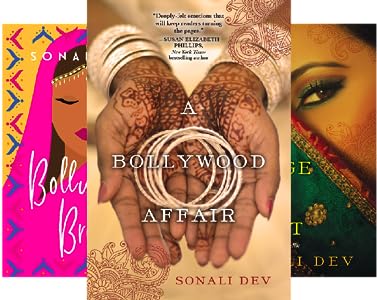 "Searingly asks its characters what they're willing to do for the people they love... explores family dynamics, class issues, and many layers of guilt, hope, and determination in ways that are both distinctly Indian and universally luminous. Another beautiful, breathtaking novel from a not-to-be-missed author." - Kirkus, STARRED Review

"There is a tremendous richness to this story... A truly captivating tale of friendship and love. Dev always delivers!" - RT Book Reviews, 4.5 Stars, TOP PICK!

Award winning author, Sonali Dev, writes Bollywood-style love stories that let her explore issues faced by women around the world while still indulging her faith in a happily ever after.
Sonali's novels have been on Library Journal, NPR, Washington Post and Kirkus Best Books of the year lists. She has won the American Library Association's award for best romance, the RT Reviewer's Choice award for best contemporary romance, the RT Seal of Excellence, and is a RITA Finalist.
Sonali lives in the Chicago suburbs with her very patient and often amused husband and two teens who demand both patience and humor, and the world's most perfect dog. Find out more at sonalidev.com.

StoryAddict
4.0 out of 5 stars A wonderful finale to Dev's Bollywood series
Reviewed in the United States on January 18, 2018
Verified Purchase
There is always a danger when you are waiting anxiously for a book that it won't live up to your expectations. Sonali Dev set the bar incredibly high with her previous books and there is always that worry that the next one will be a weak link in the chain. Fortunately, Dev is better than that and this book is an excellent conclusion to her Bollywood series.

First things first, this is not a standalone novel. It really is necessary to read the previous book, A Change of Heart, before starting this one as the plot actually begins in that book (and it you really should read The Bollywood Bride before A Change of Heart. It isn't necessary to read the first book in the series, A Bollywood Affair, before reading the others--but you really should because it is awesome!).

I will say that I had a minor issue, completely of my own making, between these two books. Rahul is introduced in A Change of Heart, and I pictured him completely differently than he's presented here. This is not Dev's fault--nothing in her previous book contradicts how his character develops here. Instead, it was what I put on him in the previous book. The fact that I recently did an audio re-read of A Change of Heart and the narrator used a much older sounding voice for him didn't help. Again, this wasn't a problem with the book, but something I had to adjust to. Once I got used to him, I really enjoyed Rahul. I found him to be much deeper than we usually see with romance heros. I have to admit that I fell a little bit in love with him--not that I want Kimi out of the way, mind you!

Kimi, oh Kimi! I need to start this by saying that I adored her--but I'm not sure I can describe her in a way that doesn't make her sound a little annoying. She reminded me a bit of one of those overly cheerful people that seem oblvious to others troubles (but in a good way!) She is more than a bit self-centered (but in a good way!) and she definitely is a bit spoiled (but in a good way!) I told you--it isn't going to sound like she'd be likable, but she really is! She is the sort of person who just want to have around you, who would do anything for those she cares about.

While there is a dark central plot here (can you get darker than black market organ theft?), this is one of the lighter books in the series. It is a retelling of Rapunzel and I loved how Dev allowed Kimi and Rahul's relationship to grow. Things start as a friendship--and a real friendship So often, we get "friendships" which are really just precursors to someone wanting to get into someone else's pants. Kimi and Rahul's, however, seems much more organic.

This is the only book in the Bollywood series to be set completely in India (well, nearly--there is one short foray to Hong Kong). The description is so detailed that you feel like you are there. I could almost smell the spices that permeate the air. Most striking is how well Dev illustrates the differences between the haves and have-nots in this society. So, while this is a retelling of Rapunzel, it also has strong Dirty Dancing overtones, and there is nothing bad about Dirty Dancing overtones!

I think I say this in every review I've done of Dev's books, but I just love her writing. Both Kimi and Rahul's personalities are wrapped up in the words that Dev uses. Plus, there are just some lovely passages. This particular one hit me so strongly that I marked it in my book (and I never mark up my books!):

"Contrary to what people believed about her, she didn't believe that she was the center of her universe. She was in fact someone whose entire existence focused on wanting a universe she could be part of."

See! I told you that Kimi was fabulous, despite everything I also said about her!

George
4.0 out of 5 stars Excellent sequel to "A Change of Heart"
Reviewed in the United States on March 27, 2019
Verified Purchase
This book is follows the story of Nic, Jen, and Jess in "A Change of Heart". Rahul, the intrepid policeman in "A Change of Heart", is one of the two focal characters, along with Kimi. Rahul, born poor, and Kimi, born rich, cross paths early in life, and have intertwined lives from childhood to the present. Kimi suffered health problems her entire life, only finally cured by a heart transplant.

Rahul is still trying to crack the black market organ ring, and Kimi becomes a target of reprisal by the crime lord. While I enjoyed the book and further examination of Indian culture, I had two problems/concerns with the book. First, Rahul is presented as a super-intelligent, unbelievably expert investigator, yet I feel it takes him a very long time to figure what is really going on and why Kimi is in danger. Second, the pacing of the book seemed to drag around the middle section. Once I got to the last third of the book, the pacing to me sped up and I had trouble putting the book down. Despite the reservations, I thought this was an excellent book, and a nice closure to this saga. If you liked A Change of Heart, then read A Distant Heart!
Read more
Helpful
Report abuse

Sheila M
5.0 out of 5 stars A Beautiful and Challenging Romance
Reviewed in the United States on December 26, 2017
Verified Purchase
FINAL DECISION: A challenging and beautiful story of love and loss and living life. Kimi and Rahul are destined for one another but life is complicated and sometimes the fear of loss prevents one from living.

THE STORY: Kimi and Rahul meet as children. Kimi, the only of eight children to survive birth has medical issues which require her to be isolated. Rahul comes to Kimi house when his father in murdered while protecting Kimi's father. In order to pay the debt of his and his siblings education, Rahul insists on working. While cleaning the mansion's windows, fourteen year old Rahul meets Kimi. The two begin a friendship that lasts to adulthood. Then things get complicated.

OPINION: This is a beautiful book that takes place in India but centers on the universal human themes of loss and love and living. A companion to A CHANGE OF HEART, this book tells the story that readers of that book got glimpses of. The book is told in varying points of view and also takes place over time and asks for some commitment from the reader. In return, the reader gets a book that is part romance, part suspense, part life drama.

Kimi and Rahul are a classic friends to lovers story mixed in with impending loss at every turn. The characters are strong and vivid. The story has a strong sense of time and place detailing the complexities of the cross-class romance in India.

I knew where the story was headed on the mystery front early on (there are quite a few clues in A CHANGE OF HEART) but I was enthralled by the intense connection between Kimi and Rahul and how their past is slowly revealed.

The depth of the story comes from how the characters deal with the possibility of loss and about letting go and when not to let go. This is not a fairy tale HEA, but rather a HEA about living ones life no matter what the outcome might be.

WORTH MENTIONING: This book is told in varying points of view over a period of years.

CONNECTED BOOKS: A DISTANT HEART is the fourth book in the Bollywood series. The books generally are loosely connected and can be read as standalones, but this book is closely connected with A CHANGE OF HEART and I recommend reading that book first (it is fabulous) because they are almost companion books.

STAR RATING: I give this book 4.5 stars.

NOTE: I received an ARC of this book via Netgalley in order to provide a review. I was not required to write a review or to write a positive review. All opinions contained herein are my own.
Read more
Helpful
Report abuse

Regina
4.0 out of 5 stars Lovely and colorful story
Reviewed in the United States on July 29, 2018
Verified Purchase
I found the story a very colorful and intriguing tale. The characters are both beautiful and misguided by their own thoughts and from the moment they met, they became friends and were a comfort to each other. They were able to be the light at the end of the tunnel for each other and in the end they became each other love.

I really enjoy the feel of the story, it felt light and colorful even with all the problems the characters were experiencing. I like the scene when Kimi is at Rahuls home and the family and neighbors are crushing spices and Kimi get right in and helps and I love how the color of the spices just burst through the story.
Read more
Helpful
Report abuse
See all reviews