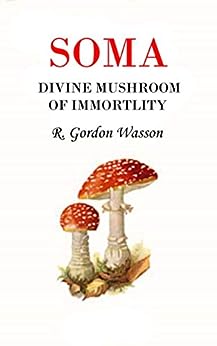 by R. Gordon Wasson (Author) Format: Kindle Edition
See all formats and editions
Sorry, there was a problem loading this page. Try again.
One of the key enigmas of cultural history has been the identity of a sacred plant called Soma in the ancient Rig Veda of India. Mr. Wasson has aroused considerable attention in learned circles and beyond by advancing and documenting the thesis that Soma was a hallucinogenic mushroom - none other than the Amanita muscaria, the fly-agaric that until recent times was the centre of shamanic rites among the Siberian and Uralic tribesmen. In his presentation he throws fascinating light on the role of mushrooms in religious ritual. A section on the post-Vedic history of Soma is contributed by the Sanskrit scholar Wendy Doniger O'Flaherty.Brian C. Muraresku in his best selling book, The Immortality Key: The Secret History Of The Religion With No Name, used Robert Gordon Wassons work: Soma The Divine Mushroom Of Immortality as one of his research tools. Brian C. Muraresku's book features a brilliant Foreword by Graham Hancock, the New York Times bestselling author of America Before: The Key to Earth's Lost Civilization. Amanita muscaria or the Fly Agaric is not a well-known mushroom based on its scientific name or common name. Yet, the picture on the left, of this mushroom, will probably be familiar to the reader. In recent time, it is the mushroom that has been adopted as the “prototype” mushroom in western cultures. Its image can be seen in Christmas and greeting cards, children's stories, science fiction and fantasy illustrations, and in mushroom models. There has even been a great deal made of its connections with Christmas, but probably too much has been made of this connection and different interpretations of this theory is available. However, it is more than just a “pretty mushroom”. It is a species that is thought to have had tremendous impact on some of today’s cultures for at least four thousand years and has been thought by some to be at the root of the origin of some of today’s religions. In 1968, Gordon Wasson put forth the concept that this mushroom was the “plant” that was referred to as Soma, in his now much cited “Soma, Divine Mushroom of Immortality”. Wasson believed Soma was the mushroom that was utilized in religious ceremonies, over 4000 years ago, before the beginning of our Christian era, by the people who called themselves “Aryans”. Wasson also believed the hallucinogenic properties of the A. muscaria to be the cause of the “ecstasy” described in the Rig Veda, the holy book of the Hindu.
Read more
Previous page
Next page

Richard White
1.0 out of 5 stars Cheap bootleg
Reviewed in the United States on July 4, 2021
Verified Purchase
The printing quality of this book was horrible. Absolute waste of money. Do yourself a favor and track down an original print of this book (you won’t find it on Amazon). If I wanted a printed pdf, I would have done so myself.
Read more
4 people found this helpful
Helpful
Report abuse

Juan Camilo Rodriguez Martinez
5.0 out of 5 stars Robert Gordon Wasson Masterpiece
Reviewed in the United States on March 31, 2016
Verified Purchase
The mystery around the Amanita Muscaria is the principal theme of these book... The magic mushroom of the fairy tales as the most plausible candidate for Soma... This book is for detectives, historians, anthropologist and enthusiasts as well....

One of the fundamental works of ethnobotany and ethnomycology... Robert Gordon Wasson is the best

One of the holy grails of the studies of entheobotany,... Grab it if you see it...

jiangzhixin
5.0 out of 5 stars but l like it!
Reviewed in the United States on November 16, 2014
Verified Purchase
book looks old,but l like it!!
Read more
One person found this helpful
Helpful
Report abuse

Amazon Customer
5.0 out of 5 stars Hare Bo
Reviewed in the United States on December 4, 2016
Having eaten Amanita muscaria every day for 2 weeks, and having read the Gita, the first nine cantos of the Srimad Bhagavatam (Prabhupada of course), I believe Wasson is correct. The first time I ate the red mushroom was the most frightening experience; after that, every day was the most peaceful experience. Difficult to put into our language. I have read the book twice, and will read it again. Be cautious if you desire to eat the red mushroom. I have eaten about 40 species of edible mushrooms; ID is important. The red mushroom is hard to miss. In the summer of 1981, we had rain every day in Colorado, and the red mushroom could be found in groups up to 150 caps, and 6' across. It is an astounding sight, and they were everywhere at height in the mountains. Preparation is to wash, place in the sun under layers of cheesecloth (flies love to eat the red mushroom to die, apparently). If the caps are potent, they will come out as an oily, smelly cap. Take 3 and blend them with a chocolate milkshake, or eat as is, if you can. The first time, have a bathroom close by. You will go to sleep, then awaken out of your body. It is terrifying, but you will meet others...be safe, and in a safe place...continue the next day for the most peaceful experience you will perhaps ever have. I was testing toxicity, and continuing to take the red mushroom over days, is not something I would recommend. Nor would I recommend it be eaten more than perhaps three times a summer. Do not ingest this mushroom if you are not experienced in shamanistic ethnobotany. This mushroom makes LSD look like a candle in the sun. They say it is poisonous, and hallucinogenic. It is neither. What you can experience is very real, and I took it to check toxicity. I ate up to 24 caps, towards the last days of my experience; me and my organs are fine. This is not to say this mushroom is for you, but/and this book is spectacular. I DO NOT RECOMMEND you take this mushroom, and this review is not to be taken as urging anyone to ingest this mushroom, for any reason whatsoever. Wasson's research and this book reveal and astonishing history of fungi and the world. I recommend this book and I agree that Mr. Wasson has discovered the Divine Mushroom.
Read more
35 people found this helpful
Helpful
Report abuse

LK
3.0 out of 5 stars lk
Reviewed in the United States on November 25, 2014
Verified Purchase
My son ordered this book for a class he was taking. He sold the book after his report.
Read more
2 people found this helpful
Helpful
Report abuse

New Age of Barbarism
5.0 out of 5 stars The Divine Mushroom.
Reviewed in the United States on February 20, 2006
_SOMA: Divine Mushroom of Immortality_, No. 1 in the Ethno-mycological Studies series, by maverick investment banker turned ethnomycologist R. Gordon Wasson is a fascinating account of the role played by the fly agaric (Amanita muscaria) in the religious development of the Indo-European (Aryan) peoples. Wasson, who wrote extensively on the role of hallucinogenic mushrooms, developed a fascination with the mushroom when he and his wife Valentina Pavlovna, a Russian pediatrician, came upon some wild mushrooms and noticed their entirely different response to the mushrooms. Wasson who was of Western European ancestry was a natural mycophobe; however, his wife, a Russian, picked the mushrooms and later used them in her food. Together Wasson and Valentina Pavlovna wrote a book detailing their experiences with the mushroom called _Mushrooms, Russia & History_. Wasson also was to undergo a hallucinatory experience with a shaman in Mexico leading to his writing about the role of the hallucinogenic mushroom in Mesoamerica.

The second section of the book written by Wendy Doniger O'Flaherty relates the various theories which have been proposed to explain the origin of soma. Among others the author discusses theories that linked soma to alcohol and to bhang (marijuana) in ancient Persia. The author relates the development of these theories among Europeans as they sought to understand primitive Indo-European origins in the Nineteenth Century.

The third section of the book discusses the mushroom in Siberia among the shamans, but also the mushroom in Europe. The author notes the practice of the shamans of drinking the urine of an individual who had consumed the hallucinogenic mushroom. He also argues contrary to the beliefs of the comparativist Mircea Eliade that drug use among shamans does not represent a form of decadence and degeneration. Among the Europeans, the author notes the mycophobic tendencies of Western Europeans, arguing that they refer to the mushroom as the "toadstool" and look upon it with disgust. The frog and the snake are also seen as symbols associated with the mushroom and have traditionally been viewed as evil creatures. In contrast, Victorians came to see the toad as a benign creature. The author argues that the mushroom played no role in the development of the Celtic peoples and among the Germans. He also suggests that contrary to a thesis advanced by certain others that the beserk rage of the Scandinavian warriors was not linked to the fly agaric. In addition, while presenting a picture of an early Christian fresco depicting a "mushroom tree" in the Garden of Eden, the author argues that this is not the hallucinogenic mushroom and that the early Christians were not a mushroom cult. There is little reason to think that the Tree of Knowledge represented the hallucinogenic mushroom.

The book concludes with various exhibits from the writings of different individuals referencing the Siberian use of the mushroom. The author also exhibits writings showing the controversy surrounding the alleged use of the mushroom among Scandinavian warriors. Interestingly, during the Second World War, it was rumored that certain Russian soldiers partook of the mushroom in order to provoke battle lust amongst them.

This book provides a fascinating account of the "divine mushroom of immortality". It is an important contribution to our understanding of primitive religion and the role that hallucinogenic substances play in the development of that belief.
Read more
36 people found this helpful
Helpful
Report abuse
See all reviews

1.0 out of 5 stars Very badly written , false claims, poor research, waste of money
Reviewed in India on November 15, 2021
This is a horribly written book on basis of fiction, waste of money
Images in this review