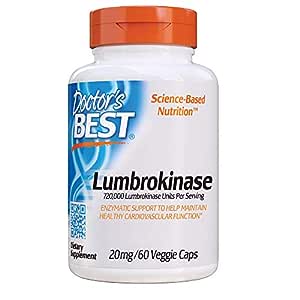 Save 15% when you receive 5 or more products in one auto-delivery to one address. Currently, you'll save 5% on your Oct 20 delivery.

Save 15% when you receive 5 or more products in one auto-delivery to one address. Currently, you'll save 5% on your Oct 20 delivery.

Visit the Doctor's Best Store
4.6 out of 5 stars 173 ratings
| 16 answered questions
Amazon's Choice recommends highly rated and well-priced products.
Amazon's Choice for "lumbrokinase"
Available at a lower price from other sellers that may not offer free Prime shipping.
New (12) from $38.84 + FREE Shipping

*These statements have not been evaluated by the Food and Drug Administration. This product in not intended to diagnose, treat, cure or prevent any disease.

Doctor’s Best Lumbrokinase is a group of highly stable fibrinolytic enzymes that have been studied and utilized extensively in China for many years. Research suggests that Lumbrokinase may have beneficial effects on the cardiovascular system*.

In many Asian cultures, the use of earthworms in traditional medicine is quite common. Hundreds of years ago, Shizhen Li compiled the famous medical book Compendium of Material, in which the earthworm (Earth dragon) was listed as a remedy for high fever and diuretic purposes in the form of a dried powder.2 This remedy is still used in Chinese folk medicine.

To meet the high demand for more natural solutions to support one’s circulatory health, bioactive components from earthworms have been studied all around the world. Because earthworms are widely used in Asian cultures, most of the scientific research on earthworms have been originated from China, Korea and Japan. The results of these studies summarized in several articles show that earthworms' extracts contain a complex enzymatic group known as lumbrokinase that has potent fibrinolytic activity. Lumbrokinase is a group of proteolytic enzymes which are able to dissolve fibrin, a protein which is involved in the coagulation of blood clots. Lumbrokinase has been shown to be safe for oral consumption in humans.3, 4, 5 Advances in the development of molecular and cellular biology techniques have greatly helped biologists to analyze the underlying molecular basis of lumbrokinase extracts. Lumbrokinase has a thrombolytic effect that may improve blood circulation*.6, 7 It has been shown to be an effective oral supplement for improving circulatory health.*8, 9

Elevated fibrinogen level is a known risk factor that reflects a problem affecting blood flow and consequently leading to heart problems. A study was conducted to observe the efficacy of one-year oral lumbrokinase enteric-coated capsules: 192 participants in the treatment group were given 600,000 units lumbrokinase, three times a day, 30 minutes before meals, and 118 participants in the control group were given placebo capsules). After 1 year of treatment, the researchers found that in the treatment group, fibrinogen level was lower and blood flow was improved. These benefits may be related to the fact that lumbrokinase has selective affinity for fibrinogen and directly hydrolyzes fibrinogen to soluble fibrinogen degradation products improving blood and plasma viscosity. Based on the study, lumbrokinase may have an anti-platelet effect through the elevation of cAMP level and Ca2+ release.10A Japanese research team investigated the pharmacological activity of pure extracts of an earthworm, Lumbricus rubellus. They discovered that the earthworm has fibrinolytic activity that is made of six different fibrinolytic isoenzymes. These enzymes were collectively named lumbrokinase after the genus name for earthworm, Lumbricus.11 Among those isoenzymes, EFE-III-1 and III-2, had strong fibrinolytic activities, broad pH optima (pH 9-11) and displayed resistance to thermal denaturation. Further studies show that lumbrokinase has trypsin-like characteristics with high substrate specificity against fibrin, which may make it suitable as a fibrinolytic agent.12, 13, 14 These results seem to suggest that lumbrokinase could potentially be an effective oral supplement in helping maintain a healthy blood state.*

A clinical study, involving 51 participants, was conducted to investigate the anticoagulation effect and fibrinolytic activity of lumbrokinase in humans. These participants were randomly divided into treatment group (n = 31) and control group (n = 20). Among other parameters, prothrombin time (PT), fibrinogen content, tissue plasminogen activator (t-PA) activity, plasminogen activator inhibitor (PAI) activity, and D-dimer level were assayed. In the treatment group, t-PA activity and D-dimer level increased, while the content of fibrinogen decreased significantly. There were no significant changes of PT and PAI activity in both groups. The researchers concluded that lumbrokinase is beneficial in lowering fibrinogen levels*. The effect of lumbrokinase may be related to the inhibition of intrinsic coagulation pathway and the activation of fibrinolysis via an increase of t-PA activity.6

A study in rats was conducted to evaluate the effects of lumbrokinase-containing earthworm powder on induced thrombotic blood clots in vivo. The powder was administered orally to rats and its fibrinolytic and antithrombotic effects were investigated. The fibrinolytic activity of plasma was increased to two-folds of the control at a dose of 0.5 g/kg/day and five times with 1 g/kg/day after 4-day administration. The antithrombotic effect was studied in an arterio-venous shunt model of rats. The weight of the blood clots decreased significantly from 43.2 mg to 32.4 mg at a dose of 0.5 g/kg/day after 8-day treatment. These results support that lumbrokinase-containing earthworm powder is valuable in maintaining healthy blood flow.*17

*These statements have not been evaluated by the Food and Drug Administration. This product is not intended to diagnose, treat, cure, or prevent any disease.

Use under medical supervision if taking anti- coagulant drugs. Contraindicated with any condition association with bleeding. . This product is labelled to United States standards and may differ from similar products sold elsewhere in its ingredients, labeling and allergen warnings

As a dietary supplement, 1 to 2 capsules in the morning and an additional 1 to 2 capsules at bedtime, or as directed by a healthcare practitioner. Take with 8-10 oz. of water, one hour before a meal or two hours after. Store in a cool dry place.

* Disclaimer: Statements made, or products sold through this web site, have not been evaluated by the Food and Drug Administration. They are not intended to diagnose, treat, cure, or prevent any disease.