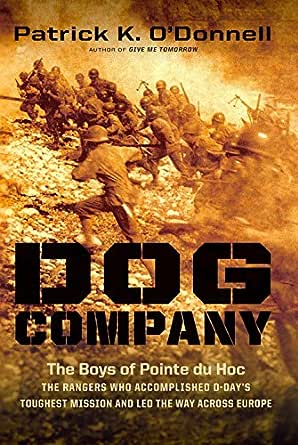 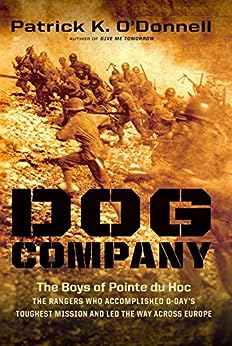 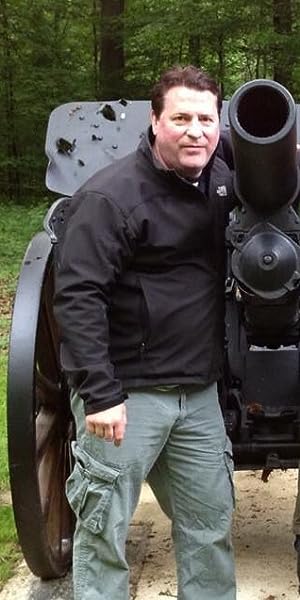 Dog Company: The Boys of Pointe du Hoc -- the Rangers Who Accomplished D-Day's Toughest Mission and Led the Way across Europe Kindle Edition

General Doug Brown USA (Ret.) Commander of U.S. Special Operations Command 2003-2007
"This is an incredible story of courage under fire, leadership at all levels and bravery beyond comprehension. The bravery and leadership of Dog Company lives on in today’s Army Rangers as they take the fight to America’s enemies in the Global War on Terror. This is the story of real American heroes and no one can tell the story better than Patrick K. O’Donnell."

Douglas Waller, author of Wild Bill Donovan: The Spymaster Who Created the OSS and Modern American Espionage
"Patrick O’Donnell has set the gold standard for war histories rich in color, drama and detail. With Dog Company, he’s hit that high mark once more. Drawing on a trove of government reports plus hundreds of in-depth interviews with the men who fought, O’Donnell takes you from the scaling of Pointe du Hoc’s murderous cliffs on the Normandy coast to the Battle of the Bulge and into the rubble of Germany. World War II comes to life through the eyes of this one company of intrepid U.S. Army Rangers."


Kirkus Reviews, 10/1/12
“[An] inspiring story…O'Donnell engagingly describes how a dedicated team was built out of the specialist training it received, but he is at his best presenting the fortunes and shocks of battle as the months of planning and training were blown away in a series of mischances that also fortuitously safeguarded the unit from delayed pre-invasion bombing runs…A worthy tribute honoring each member of a small group of volunteers who responded to the call of duty.”

Bookviews blog, November 2012
“The story of the heroism of the men defies the imagination, but it is real and told well by a distinguished military historian.”
Politics & Patriotism blog, 11/7/12
“A fast-paced read that’ll redefine your understanding of the U.S. Army Rangers in Europe during Word War Two.”

Roanoke Times, 11/9/12
“A fine tale of heroism and sacrifice marked by many personal interviews with the very few present-day survivors.”
Kingman Standard, 11/7/12
“Carefully documented and researched…[O’Donnell’s] interviews of many surviving veterans have captured their stories in fitting detail…This is a 5-star book and one which every veteran can be proud of having on their bookshelf!”

“Tells [Tom Ruggiero’s] D-Day story in tight detail. It also provides fresh and intimate looks at how the Plymouth native and others in Dog Company went on to fight their way across France and into Germany. O’Donnell’s story captures the essence of bravery in a man we can all still proudly honor.”
Milwaukee Public Library blog, 12/28/12
“If you enjoyed Saving Private Ryan or Band of Brothers, then this new book on D Day…will be right up your alley. Well researched and written, the story of a company of US Army Rangers and their near impossible mission is a tale of honor, gallantry, persistence and death.”

Seattle Times, 1/6/13
“O’Donnell skillfully tells the tale of the 68 soldiers who made up the 2nd Ranger Battalion… Though there have been hundreds of books that tackled D-Day, none have given so much detail to this one company or to Pointe du Hoc… O’Donnell does an admirable job presenting the story of the Rangers in such minute detail that you feel you are there during the assault… Dog Company helps keep that sacrifice alive with the cinematic telling of a small story that forever changed history.”

“[O’Donnell] writes vividly about war…Readers of Dog Company will be immersed in the soldiers’ lives from training all the way to the battles they fought.”

Lima News, 2/10/13
“O’Donnell paints a vivid picture of the valor possessed by the 68 soldiers of the 2nd Ranger Battalion, D company during World War II. If you enjoyed ‘Band of Brothers,’ this story is for you.”

The Key Reporter, 3/12/13
“Powerful, immediate and poignant.  The men of Dog Company richly deserve this remembrance of their valor.”
Midwest Book Review, March 2013
“A powerful account of World War II and a 'must' for any military history holding.”

America in WWII, April 2013
“O’Donnell effectively captures the story of these Dog Company Rangers in combat…A fast-paced personal story…It blows away the dust of history.”
WestLife, 3/27/13
“Provides an hour-by-hour account of Dog Company’s stand against a much larger German force.”

WomanAroundTown.com, 11/18/12
“No one doubts the bravery of the gallant men of Dog Company…And no one is more qualified to tell the tale than Patrick K. O’Donnell.”
InfoDad.com, 11/29/12
“Fine and finely detailed…There is plenty of action here, plenty of detail about battles major and minor, plenty of heroism to contemplate, and plenty of material to keep readers fascinated by the events of World War II interested.”

Reference and Research Book News, December 2012
“Written in a dramatic narrative style for general readers and WWII history buffs, the book emphasizes the roles and relationships of individual members of the company.”

San Antonio Express-News, 12/21/12
“The daring combat actions by ‘boys’ from America’s heartland comes to life in Dog Company…O’Donnell captures the intensity of the mission.”
Marion Sentinel, 12/20/12

Alex Kershaw, New York Times best-selling author of The Liberator
"Long admired for his powerful combat narratives, with Dog Company O’Donnell has produced his finest book yet. A fascinating tale of extraordinary heroism."

John C. McManus, author of September Hope
"An intimate history in the Band of Brothers tradition. Only a gifted combat historian like Patrick O'Donnell could bring Dog Company’s story to life with such stunning immediacy and well researched accuracy. Chock full of pulse pounding action and keen insight, this book is a true page-turner."

Joseph Balkoski, author of Omaha Beach
"No World War II historian can tell the story of the U.S. Army Rangers better than Pat O’Donnell, and in his book Dog Company he has managed to relate the remarkable history of a single Ranger company in an informative and entertaining way. It is a great read, and I recommend it highly, both to history buffs and those with only a passing interest in America’s past."

Flint Whitlock, author of If Chaos Reigns
"Wow! Another victory for Patrick O’Donnell, who really captures the spirit of this elite group of Rangers&mdashpossibly the toughest fighting force America has ever put together. Dog Company is every bit as good as Stephen Ambrose’s Band of Brothers, and likely even better.” --This text refers to an out of print or unavailable edition of this title.

Patrick K. O'Donnell is a military historian and the award-winning author of seven books, including the bestseller and William E. Colby Award winner Beyond Valor, Give Me Tomorrow, and We Were One, the highly acclaimed account of the Battle of Fallujah. He has provided historical consulting for DreamWorks' award-winning miniseries Band of Brothers and for documentaries produced by the BBC, the History Channel, and Fox News. Visit him at www.patrickkodonnell.com and at www.facebook.com/patrickkodonnell
--This text refers to an out of print or unavailable edition of this title.