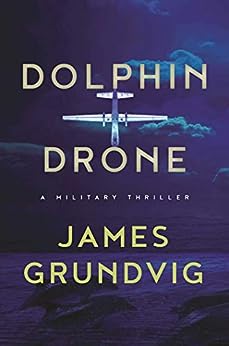 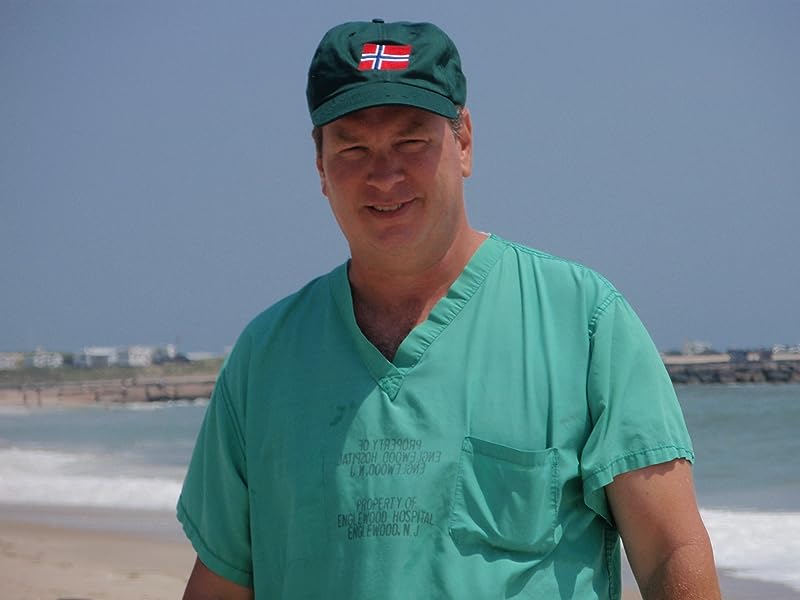 by James Ottar Grundvig (Author) Format: Kindle Edition
See all formats and editions
Sorry, there was a problem loading this page. Try again.
A taught, high-concept thriller that humanizes the men and women behind military espionage.

James Grundvig’s Dolphin Drone takes us into the complex underworld of global terrorism with razor-sharp plot twists, remarkable characters, and fascinating insight into the technological advancements of the US Navy.

Using dolphin sonar-tracking technology, Ex-Navy SEAL Merk Toten stumbles of freshly laid Iranian sea mines while conducting surveillance on two US ships that were hijacked by Somali pirates on the Strait of Hormuz. This discovery occurs on the same day that a fake intelligence report draws three US drones away from the Persian Gulf. Toten investigates the parallel events to uncover a new super-terrorist group made up of a network of Somali warlords, Islamic assailants, Yemen-based terrorists, and ISIS sympathizers.

When Merk Toten and the beautiful CIA Operative Jenny Myung King discover a plot by this new terrorist organization to bomb New York Harbor, the duo must race against the clock to stop the devastating attack.

Skyhorse Publishing, as well as our Arcade, Yucca, and Good Books imprints, are proud to publish a broad range of books for readers interested in fiction—novels, novellas, political and medical thrillers, comedy, satire, historical fiction, romance, erotic and love stories, mystery, classic literature, folklore and mythology, literary classics including Shakespeare, Dumas, Wilde, Cather, and much more. While not every title we publish becomes a New York Times bestseller or a national bestseller, we are committed to books on subjects that are sometimes overlooked and to authors whose work might not otherwise find a home.
Read more
Previous page
Next page

James Grundvig is a freelance journalist who has published in the Huffington Post, Financial Times Foreign Direct Investment magazine, Law.com, the Epoch Times, among other media outlets. His investigative work uncovered toxic dispersants used in the BP oil spill that “sank” the oil in a black carpet at the bottom of the gulf, Europe’s failure to combat domestic terrorism, and how big data and sensors are creating the “smart cities” of tomorrow. James’ Norwegian heritage, steeped in shipping and offshore oil and gas sectors, has instilled a lifelong fondness for the sea and appreciation of marine life. He lives in New York City.

James Grundvig is a freelance journalist who has published in the Huffington Post, Financial Times Foreign Direct Investment magazine, Law.com, the Epoch Times, among other media outlets. His investigative work uncovered toxic dispersants used in the BP oil spill that “sank” the oil in a black carpet at the bottom of the gulf, Europe’s failure to combat domestic terrorism, and how big data and sensors are creating the “smart cities” of tomorrow. James’ Norwegian heritage, steeped in shipping and offshore oil and gas sectors, has instilled a lifelong fondness for the sea and appreciation of marine life. He lives in New York City. --This text refers to an alternate kindle_edition edition.

“Step it up Tom Clancy, there’s a new suitor in town. And James Grundvig’s cocktail of dolphins, drones, terrorism, special ops, and the latest military gadgets all wrapped inside layers of impending massacre and international intrigue is an intelligent and informative thriller. . . An excellent and educational read for thoughtful booklovers and those looking for an exotic adventure filled with tension, politics, and underwater bravery. Kudos to Grundvig!” —Ron Lealos, author of Pashtun, Don’t Mean Nuthin’, and The Sixth Man

“James Grundvig’s novel Dolphin Drone revolves around the fascinating use of specially trained dolphins by both the US Navy and the former Soviet Navy that combines not only known facts, but also some of the speculation about the two once-secret programs.” — Bob Furlong, former British Commando and consultant for Jane’s International Defense Review.

"Journalist Grundvig’s promising first novel introduces “dolphin whisperer” Merk Toten and his two military-trained bottlenose dolphins, Tasi and Inapo. In the night waters off the Strait of Hormuz, the dolphins are mapping an Iranian pipeline when Merk and his partner, Special Forces biologist Morgan Azar, realize that a nearby fishing trawler is actually dropping sea mines into the strait. Merk decides to document the mining, but they are discovered and Morgan is killed in the ensuing firefight. Meanwhile, Somali pirates seize a Norwegian-owned, Singapore-flagged supertanker in the Gulf of Aden. Their motive is unclear, though a terrorist group is involved. Merk, his dolphins, and his girlfriend, the deadly CIA agent Jenny King, wind up trying to stop a planned attack on U.S. soil. The plot and characters, other than the dolphins, are straight out of the standard military thriller playbook, but the fins, as they are known, have unusual appeal, and readers will hope that any sequels will showcase more of their incredible capabilities.-- Publisher's Weekly --This text refers to the hardcover edition.
Read more

James Ottar Grundvig is a first generation Norwegian-American, who lives and works in New York City. As an investigative journalist, he covers technology, sustainability, energy and business, and their intersections. James has outmaneuvered mainstream media in breaking stories, from the political red-tape with the BP Oil Spill, to the Zika money grab by the CDC.

James has published dozens of articles in the Huffington Post, the Financial Times Foreign Direct Investment (FDI) magazine, the Epoch Times, Law.com, and GreenMedInfo.com, among other media outlets.

Technology is the common thread that connects the three books.

4.2 out of 5 stars
4.2 out of 5
67 global ratings
How are ratings calculated?
To calculate the overall star rating and percentage breakdown by star, we don’t use a simple average. Instead, our system considers things like how recent a review is and if the reviewer bought the item on Amazon. It also analyzes reviews to verify trustworthiness.
Top reviews

Kindle Customer
5.0 out of 5 stars I loved this book
Reviewed in the United States on September 11, 2018
Verified Purchase
I learned so much about the middle east and the training and the use of dolphins. I couldn't do it myself because of parting with the animals. If well treated and their trainers have the same feeling for war dolphins and dogs as people have for a loved one then I think they would protect each other. I they should have access to the sea when off duty and dogs to live with a trainer or family so that they are treated as they were meant to be. They can save many lives like they did in Man and then when we lost the war the dogs were put to death. That is like killing thousands service personnel. Something I hope never happens again. My brother was there and said it was harder on the handlers than the war. In your book you gave us hope that animals and humans can work together and both enjoy each other. Thanks for this wonderful book. I have read books about dogs but never about dolphins. Thanks again
Read more
2 people found this helpful
Helpful
Report abuse

Foster
5.0 out of 5 stars Very Surprising!! I truly enjoyed reading this book.
Reviewed in the United States on August 22, 2021
Verified Purchase
The surprising thing is how much you get attached to the characters, including the dolphins. I enjoyed the characters and the suspense of the novel. It kept my interest until the very end
Read more
Helpful
Report abuse

Kindle Customer
4.0 out of 5 stars Very Interesting Story with a Couple Reservations
Reviewed in the United States on April 4, 2017
Verified Purchase
Having been a meteorologist, I found the storied conclusion scenario was somewhat suspect. One of the big problems with chemical weapons is that they are subject to the vagaries of the wind and weather and therefore just OK as a Weapon of Mass Destruction. The number of casualties, however, was consistent with the story. The dolphin part of the story was great.
Read more
2 people found this helpful
Helpful
Report abuse

Jerry Hudson
5.0 out of 5 stars A fascinating complex military thriller
Reviewed in the United States on August 21, 2020
Verified Purchase
Excellent plot by a new author for me. Hard to put down and well written combining marine mammal activity with a terrorist hunt
Read more
Helpful
Report abuse

Omi
2.0 out of 5 stars Too Technical for Me
Reviewed in the United States on September 10, 2018
Verified Purchase
Too Technical for this civilian. Middle East and South African politics too complicated to follow along with all the military acronyms. No thanks.Fast forwarded to the end.
Read more
2 people found this helpful
Helpful
Report abuse

Bonnie
5.0 out of 5 stars Great story!
Reviewed in the United States on September 21, 2018
Verified Purchase
What an amazing story! Loved to see the dolphins bond with their trainer! Full of suspense and intrigue! Loved the book!
Read more
Helpful
Report abuse

Amazon Customer
5.0 out of 5 stars There really are programs like the US Navy mms!
Reviewed in the United States on January 14, 2019
Verified Purchase
I enjoyed the hell out of this book,. Not the least because I have had a personal involvement with cetaceans.
Read more
Helpful
Report abuse

William M. Klepper
4.0 out of 5 stars Dolphins have feelings too!
Reviewed in the United States on March 26, 2017
Verified Purchase
I wish the Dolphins had a greater role and the death of one dolphin brought a moment of sadness to the story.and one of gladness when the other got its revenge.for that death.
Read more
3 people found this helpful
Helpful
Report abuse
See all reviews

steve1946
5.0 out of 5 stars Great read
Reviewed in the United Kingdom on December 26, 2019
Verified Purchase
Really well written, a totally engrossing ride, will definitely look for other titles from James. I've had the book for some time but only just read - I wished is started sooner.
Read more
Report abuse