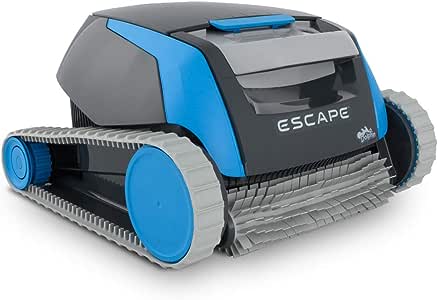 by DOLPHIN
4.1 out of 5 stars 299 ratings
Currently unavailable.
We don't know when or if this item will be back in stock.

4.1 out of 5 stars
4.1 out of 5
299 customer ratings
How does Amazon calculate star ratings?
Amazon calculates a product’s star ratings based on a machine learned model instead of a raw data average. The model takes into account factors including the age of a rating, whether the ratings are from verified purchasers, and factors that establish reviewer trustworthiness.

SupercarStreetracing
5.0 out of 5 stars A Tale of 2 Cleaners, Out with old, in with the new.
Reviewed in the United States on March 2, 2017
Verified Purchase
So I have been suffering....and let me repeat this....suffering for over 5 years with a Kreepy Krauly Great White which retails for over $400 bucks. I have been looking at robotic cleaners for a while. This project came in 2 steps. 1) Eliminate most of the tree limbs around/above the pool dropping leaves in, and 2) Purchase a REAL robotic pool cleaner. Step one was completed this weekend. As many limbs as could be removed were cut, and above the pool is completely clear now. Step 2 started on Monday, I found this robotic vacuum out of the blue and it had several good reviews AND a $50 rebate, so I thought WTH, I might as well get it. Yesterday (Wednesday) the vacuum arrived, but I had work to do first. Three huge piles of tree limbs from the tree cutters to haul to the streets so the city waste will pick it up. 3 hours later I had the 2 piles next to the pool clear. Next I had to remove the winter net from the pool which in the past is the only defense against leaves and debris. Of course removing the net means all the debris stuck around the edges of the net most likely goes in the pool, which FYI already had a lot of debris in it because my Kreepy Krauly Great White refuses to go to the shallow end. EVER. So we have a pool full of debris and I removed the Great White and took pictures of it for its ebay auction. I opened the Dolphin Escape excitedly. I couldn't wait to try it. It was ready to go out of the box. Connected the power cable to the power supply after untangling the cord completely, dropped the thing in the water and hit start. 1 hour later, the pool looked like the photo I attached. Now, granted, it didn't get every single thing out on the first try. I ran it for a second cycle and went to bed and when I woke up I'd say 99 percent of the debris was totally gone. I was so happy. I pulled it out, opened the lid and found all that stuff in the debris canister. Easily emptied it, washed it with a hose, and put it back in the unit. I disconnected the power cable, untangled and coiled the cable onto the unit, and placed it upside down as instructed in my storage shed so it could get a nap after all the hard work. I can't say enough how pleased I am about this purchase. I also got the 4 year extended warranty available, which I encourage you to also do. I would say this is a huge win, factoring in of course it it lasts a long time. I'm thinking I'll have to do this maybe 2 or 3 times a week in the winter time but I may not even need the pool net anymore!

EDIT: I noticed when the cleaner switches directions it leaves the ground and floats, popping a wheelie. I called maytronics and they said this is a feature, not a flaw. I find that difficult to believe, however since it still cleans properly every single time, I cannot hold it against them.

Edit 7/20/17 - Unit is still working GREAT. I use it once a week, have had no problems. I will stress to you, buy the extended warranty. Getting an extended warranty on a pool cleaner is almost unheard of, and it's cheap, so buy it. But still this thing is running like a freaking champ!

Amazon Customer
5.0 out of 5 stars Torture tested and passed
Reviewed in the United States on May 11, 2018
Verified Purchase
I basically torture tested this thing. My pool was left unkept for the most part over the winter. Then we got our deck redone and tons of sawdust got in the pool. The pictures show the first coupl strips that the robot ran and they when from yellow to blue. The other picture shows how much the bucket had in it and that was after several days of operation. This thing is awesome.
Read more

D. Gean
4.0 out of 5 stars Good unit...Ultrafine filter should be included!
Reviewed in the United States on May 21, 2018
Verified Purchase
We replaced a worn out 6 year old Aquabot Jr... It was always adequate, but a pain to clean filter media. This unit is much better. Does a nice job, line doesn't tangle and filters are easy to clean. So far so good. We've only had it a month. It cleans our 18x33 above ground pool and misses nothing.
The reason I didn't give it 5 stars is the filter that it comes with, does not get the fine particles. You have to buy a $70 ultrafine filter. Not good Dolphin. For the price of this unit, that should be included.
That said, we would recommend this cleaner.
Read more
49 people found this helpful
Helpful
Comment Report abuse

Bluegirl
5.0 out of 5 stars This thing is amazing
Reviewed in the United States on January 8, 2018
Verified Purchase
I bought this because I got frantic trying to close my pool when it was getting really cold and started to freeze and didn't have any help. I'm in bad health and don't have the energy or strength to get the leaves off the bottom with a net. When I received this I threw it in the pool and I was amazed on how well it sucked up the leaves and junk. It doesn't use the pump or filter on the pool. It's easy to put it into the pool and get it out and I can lift it when I take it out. It has a basket that needs to be emptied a lot when you have as much junk on the bottom of the pool as I did, and actually still do, but it's easy enough to clean out. The cord doesn't get tangled on it either. I don't have an outlet that's close enough to the house so I use an alternate power supply. You're not supposed to use an extension cord whatsoever. I never got to finish closing the pool correctly but it will be nice to have when it comes time to opening it again. After the initial cleanup in the spring, this will keep the pool clean because it will always eat the leaves that fall into the pool which are a pain in the butt trying to fish them out all the time and it won't have to be emptied as much then. It will pay for itself in the long run because the leaves are what cause more algae and then you have to add more chemicals although I use the BBB method (baking soda, bleach and borax) it's cheaper and more user friendly and make sure you have a professional water test kit. I use the Taylor K2006. After a lot of research I picked this robotic cleaner and don't regret spending the money on it one bit.
Read more
44 people found this helpful
Helpful
Comment Report abuse

Boise Foxes
5.0 out of 5 stars Game-Changer!!
Reviewed in the United States on January 14, 2018
Verified Purchase
This thing is amazing. We plug it in, toss it in the pool, and walk away. Clean pool. Before we got this, we had to vacuum our 18-ft round above-ground pool every Saturday, and it was kind of tough. If we missed a week, we had to scrub twice as hard the next week, and we had trouble with cloudy and green water. Now that we've completed one summer with the robot, I have to say, it's a game-changer! The pool has stayed clean. Period. No cloudy water days, no messing with the chemistry. It's lightweight, which is important for me, because I'm a wimp. It's easy to use and when you're done you just dump out the filter and rinse it off. It didn't come with a manual, however - just a quick-start guide - so we found one on the web and downloaded it.
Read more
39 people found this helpful
Helpful
Comment Report abuse
See all reviews from the United States

Page 1 of 1 Start overPage 1 of 1
This shopping feature will continue to load items when the Enter key is pressed. In order to navigate out of this carousel please use your heading shortcut key to navigate to the next or previous heading.
Back
Next
Pages with related products. See and discover other items: above ground pools, pool above ground, Best Rated in Robotic Pool Cleaners, Best Rated in Automatic Pool Cleaners, pool motors, Explore swimming shark batteries for pool