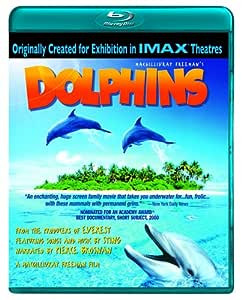 Secure transaction
Your transaction is secure
We work hard to protect your security and privacy. Our payment security system encrypts your information during transmission. We don’t share your credit card details with third-party sellers, and we don’t sell your information to others. Learn more
Details
Ships from
Amazon
Sold by
Captain Shelly Stone
Dolphins [Blu-ray] has been added to your Cart

$19.50
& FREE Shipping on eligible orders. Details
Sold by: WeeBee CD's N Stuff
Have one to sell?
Sell on Amazon

Pierce Brosnan (Actor), Alejandro Acevedo-Gutiérrez (Actor) Rated:
NR
Format: Blu-ray
4.0 out of 5 stars 294 ratings
Available at a lower price from other sellers that may not offer free Prime shipping.

Plunge into the realm of wild dolphins in this great adventure film MacGillivray Freeman Films, producers of the large-format films "Beavers" and "The Living Sea." In "Dolphins," you'll experience the warm, white sand banks of the Bahamas where the inquisitive dolphins live and play. Find out how we are unraveling the mysteries of dolphin communication. Here, you'll also meet a bottlenose dolphin named JoJo who explores the colorful reefs with his human friend Dean. Brimming with details about the complex lives of these fascinating animals, this ocean adventure film takes you into the very heart of the world of Dolphins. Narrated by Pierce Brosnan, music by Sting. Ever wonder "how did they do that?" "The Making of Dolphins,'" shot on High-Definition Video, takes you behind the scenes.

4.0 out of 5 stars
4 out of 5
294 global ratings
How are ratings calculated?
To calculate the overall star rating and percentage breakdown by star, we don’t use a simple average. Instead, our system considers things like how recent a review is and if the reviewer bought the item on Amazon. It also analyzes reviews to verify trustworthiness.
Top reviews

QandAguy
4.0 out of 5 stars A good family documentary
Reviewed in the United States on March 7, 2016
Verified Purchase
We picked this for our kids (9 and 3) and they both loved it. This is a very accessible documentary about dolphins and the campaign to help them in the Caribbean. At one point I got nervous as the movie flirted with the idea of what happens to dolphins in fishing nets (which could be pretty ugly/not very kid friendly) but instead they touched on it enough to make the point but not too much. We all learned something about dolphins and the youngest viewer mainly enjoyed seeing them both in the wild and in captivity.

This movie is relatively short so the only shock for the kids was that they were expecting something in the 90 minute to 2 hour range and I think it clocks in at around an hour.

Delilah Earls
2.0 out of 5 stars Very informative but definitely NOT entertaining.
Reviewed in the United States on July 16, 2019
Verified Purchase
This should not be advertised on other children's movie videos. I purchased it and it is incredibly BORING and does not hold the attention of the adult, let alone a child.
Read more
Helpful
Report abuse

Cooljonnorris
4.0 out of 5 stars second best dolphin DVD I've seen
Reviewed in the United States on November 5, 2007
Verified Purchase
This is a great production about dolphins. It was shot on 70mm film for Imax theaters and converted to DVD. Needless to say, the footage is stunning (and extremely difficult to shoot). 70mm film captures an incredible image and the overall quality of the footage is outstanding.

It is a bit weaker on the content side. Due to the constraints of shooting Imax film, the main feature is not very long (about 40 minutes), and the segments tend to be short as well. Also, this project concentrated more on a scientific angle and emotional appeal than the excellent "Dolphins - Tribes of the Sea" DVD. While there is a certain amount of similarity and overlap between these two DVDs, the focus and content are a bit different, and the extra features on this DVD are as good, if not better, than the main feature itself.

In my "Tribes of the Sea" review I needle this DVD a bit about the female scientist (Kathleen Dudzinski) and her skimpy red swim suit, but that is all in good fun (and I am certainly not complaining!). In all fairness, the footage of Dean Bernal in his skimpy swim suit provides good balance and gender equity. Seriously, though, both sets of footage of these humans swimming with dolphins shows the similarity of grace and motion of our respective body types, and is not at all out of place. In fact, I think it is something that should have been more clearly addressed. This is a highly polished, Hollywood feature production, and one expects that sort of production value in what is basically a promotional piece for our oceans.

One of the things that bothered me about this DVD was that it seemed to focus on people more than the dolphins. Not a bad thing if you want to create identification and connection in your audience, but not something I cared much about.

The other minor nitpick I had with this DVD was the constant sense of people (scientists) being superior to these "wild animals," and not considering that they are more than just cute, smart, seafaring dogs that need our wise protection. I happen to think they may well be far more intelligent than we, and are certainly far more capable physically than we humans. That shallow, scientific/academic snobbery is something that always rubs me the wrong way, and, for me, taints the way dolphins are portrayed in this production. (It would tickle me no end to find out that it is the other way around, and we end up needing their kindness, compassion, and knowledge to survive. We'll have to wait a bit and see on that one.......) Dean Bernal was refreshingly open about his dolphin pal Jojo and stood out in sharp contrast by thinking of the dolphin more as an equal.

The "Tribes of the Sea" DVD was much more open in speculating about dolphin culture and intelligence, as well as demonstrating far more strikingly just how incredibly bright they are. It made me feel like the dolphins were being considered as sentient beings equal to ourselves, instead of cute, kind of smart, curiosities to be studied and groomed in aquatic stables. This DVD definitely lost points with me on that score. I'll wager that the reality of the cetacean soul will prove to be far more than scientists can imagine (not that scientists are known for imagination.......or souls).

Still, this is a great DVD about dolphins, with great footage and some real human warmth managing to sneak through, especially in the "Making of" extra feature (this DVD is worth getting just for the short scene in here of dolphins watching themselves dance underwater in front of a mirror - absolutely wonderful and amazing!). There is also a Windows Media Video version on a separate disc for playing on your computer, and lots of other features and references to more dolphin material (all with the proper scientific slant, of course).

If you can only get one dolphin DVD, get "Tribes of the Sea." If you can get two, get this one as well. These two together give an outstanding glimpse at the wonderful world of our cetacean brothers and sisters, and should be required viewing on a regular basis.

shortywcb
5.0 out of 5 stars Niece Loved It.
Reviewed in the United States on June 2, 2013
Verified Purchase
It's very informative and yet it's very fun. My niece learned a lot about dolphins and what they like to do for fun. It also shows that if you stick around them long enough, you can become their best friends. Very good quality of pictures and sound. My niece would definitely recommend this movie to people of any age. The version my niece had came with a disc for the dvd player as well as a disc for the computer which was great.
Read more
Helpful
Report abuse

Lauren Q. DubA
5.0 out of 5 stars Great footage, great music
Reviewed in the United States on October 16, 2016
Verified Purchase
Great footage, great music, positive, feel-good movie. Inspirational look at people who have devoted their lives to learning about how these amazing creatures communicate. Fun and beautiful. An older movie, but very enjoyable nonetheless, reminding us to appreciate the beautiful life on our planet, and to take note of the ways we can preserve it.
Read more
Helpful
Report abuse

Marley G Wagon III
5.0 out of 5 stars Worth a watch
Reviewed in the United States on January 3, 2017
Verified Purchase
My wife complained about how much she didn't want to watch this but within the first two minutes she was hooked and wanted to watch a whole bunch of wildlife movies after great flick
Read more
One person found this helpful
Helpful
Report abuse

Jens Erik Bech
5.0 out of 5 stars Region B capable
Reviewed in the United Kingdom on October 27, 2009
Verified Purchase
Mac Gillivray Freeman has a mission. He wants to save the environment.
Therefore he has made some stunning IMAX movies.
You should collect every single one of them.
The ones I have collected has not been region prohibited. But it is difficoult to get the information anywhere.

I understand that some people don't like humans to be a part of the creation. Those should go for "David Attenboroughs" movies instead. In Freemans movies, people play a loving and active role as caretakers of the earth.
Thats "my" movies.IMAX quality are the best! Freeman just love colours! Sometimes he will take a red lamp down into the ocean to spice up the colours. Don't I just love Freeman!;-)
And actor Pierce Brossnan tells the story. Sting plays the underlying music. Freeman is a perfectionist!

Sonolta Photography
5.0 out of 5 stars Love Dolphins, This DVD Is Excellent
Reviewed in the United Kingdom on November 27, 2010
Verified Purchase
Not so much for entertainment, but more of an in-depth narrated film about these wonderful creatures. This DVD opens up a whole new world to the life of Dolphins than the smiley face mammals they are. A truly excellent and educational watch.

Pierce Brosnan narrates very well indeed. If you can't buy this DVD locally and you have a region 1 capable DVD player, order it from the USA or borrow a copy from a friend as it's well worth the watch.
Read more
Report abuse

corey
1.0 out of 5 stars ok
Reviewed in Canada on October 31, 2020
Verified Purchase
my budy likes it
Read more
Report abuse

Chris Young
4.0 out of 5 stars Love it!
Reviewed in Canada on June 15, 2015
Verified Purchase
Love it!! Very informative! And Pierce Brosnan does a fine job of narration, pleasant listening voice (although he's no Morgan Freeman!)
Read more
Report abuse
See all reviews