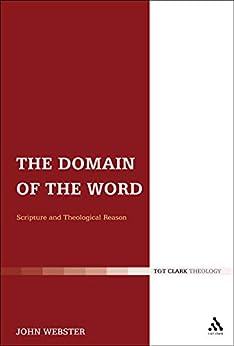 The Domain of the Word: Scripture and Theological Reason Kindle Edition

by John Webster (Author) Format: Kindle Edition
See all formats and editions
Sorry, there was a problem loading this page. Try again.
The book brings together a set of related studies on the nature of Scripture and of Christian theology by one of the most prominent representatives of Protestant theology of our time. After a brief introduction on the setting of the book and its major themes, the first part of the volume examines topics on the nature and interpretation of Scripture. A comprehensive proposal about Scripture and its interpretation is followed by a study of Scripture as the embassy of the risen Christ, and by three related chapters analyzing the ways in which widely different major modern theologians (Barth, T.F. Torrance and Rowan Williams) have understood the nature and interpretation of the Bible.

“All the hallmarks of Webster's book-clarity, austerity of style, and irrepressible cheerfulness-seem to me to have been magnified in this rich volume.” ―Jonathan Douglas Hicks, University of Otago, Anglican Theological Review

“Webster's book is a remarkable accomplishment: a wide-ranging and learned work by a theologian approaching the height of his powers. Those with interests in systematic theology will profit greatly from this excellent collection.” ―Paul Dafydd Jones, University of Virginia

John Webster was Professor of Systematic Theology at the University of Aberdeen. His published work includes a number of books on the theology of Karl Barth, on the nature and interpretation of Scripture, and on Christian dogmatics, including Confessing God. He edited The Oxford Handbook to Systematic Theology, and is an editor of The International Journal of Systematic Theology. He is a Fellow of the Royal Society of Edinburgh. --This text refers to the hardcover edition.

Albert
4.0 out of 5 stars Thought-provoking, but difficult
Reviewed in the United States 🇺🇸 on May 3, 2022
Verified Purchase
I have decided to edit this upon a reconsideration of the book. While many of my original criticisms remain (it is dense, it falls short of a Reformed Orthodox position of inspiration, it makes subjective revelation primary), there is also much profit in reading it (or at least good chunks of it) if you are exposed to hermeneutical naturalism - which we all are since the Enlightenment. While some of Webster's bibliological content needs revision and critical appropriation, his mode of thought is commendable and to be imitated. Focus on chapters 1-3, 6-8, and 10. 4-5 and 9 are interesting as bits of historical theology, but I did not find them personally helpful (although 4 demonstrates how the bibliology that Webster articulates here is definitely influenced by Barth).

Also on a second reading, his treatment of sufficiency still falls short of a Reformed Orthodox understanding, but is more nuanced than I originally gave it credit for. It is also much closer to the Reformed Orthodox position. Here it is of extreme importance to note that "illumination" is in the part of the book about Scripture, and not in the part of the book about theological reason. His nuance of sufficiency I think is out-of-place in that it doesn't really address sufficiency - it does make a helpful (and accurate) point, that reading Scripture requires regenerate character and should be done in the context of spiritual practices. Thus, his position on sufficiency doesn't actually talk about what I originally thought it denied - the material sufficiency of Scripture for faith and practice. This is still potentially denied by Webster's insistence on illumination as subjective revelation, but perhaps not necessarily if revelation is meant in a "broad" rather than "narrow" sense in illumination. The question for Webster: does illumination reveal content within the text, or other content through the text as a medium? I don't think he answers this question. The former is the material sufficiency of Scripture, while the latter is a denial of it. I think Webster might warn that holding the material sufficiency of Scripture can prompt towards a hermeneutical naturalism...but I think this is overcome by placing material sufficiency within the "theological" nature of Scripture as a created coordinate of the divine Word.

1. Bibliology precedes hermeneutics. Like Webster's short essay "Agere sequitur esse" in GWM, Webster makes the wonderful point that interpretation of Scripture must take into account the nature of Scripture. This leads to a theological account of Scripture's nature. He gives four main attributes: unity, clarity, sufficiency, and authority. This helps avoid naturalism in biblical study.

2. Webster treats Scripture as a sacrament, and thus refuses to call Scripture (as such) revelation, but rather treats the reading of Scripture as the event in which revelation occurs. So Webster seemingly confuses inspiration and illumination, making illumination revelatory. Correspondingly, the attributes are functional (in the event of reading), rather than truly ontological (describing the nature of Scripture). This also leads to a conclusion: Scripture requires supplement.

3. Webster rightly emphasizes: nature is not destroyed, but renewed by grace. However, his portrayal of illumination seems at odds with this, when illumination is seen as being revelatory. According to his account of illumination, the Spirit brings new revelation (rather than guiding reason to appropriate the deposited revelation in Scripture). As previously mentioned, it is telling that the essay entitled "illumination" is in the Scripture part of the book, and not in the theological reason part of the book.

4. Webster provides a helpful glance at redemptive history. The resurrection is the necessary condition for understanding Scripture. This is a bit of an odd statement at first, and so it takes some unpacking. What he means: Christ's work (redemptive-history) is the ground of redeemed life (ordo salutis) which is the individual context within which the Spirit illuminates Scripture. With similar, but less careful statements, Webster at times prompts the question of "what about prior to Christ's resurrection?"

5. Webster seems to incorporate the personal experience of each believer into redemptive history. This seems to fit naturally with "illumination as revelation." If illumination is revelation, then my life (which includes being illumined) has redemptive-historical significance. I am not sure if Webster was intending to give such significance to ordinary Christian life, but that seems the most straightforward reading.

Notes on style: I really wish Webster would define or elaborate his terms at times, along with why they are significant. I mentioned in reviewing GWM that he sometimes expects certain rhetorical flourishes to do his work for him. It is more intense here. Example: "communicative." Because of this, there are many more sentences which while they sound good and intelligent, seem difficult to identify any actual content within. I'd say that this is Webster at his most "Barthian" in terms of writing style.

I was both frustrated by this book, and profited from it. It was a long and difficult read. GWM is not the easiest read either, but was much easier than a lot of this book. There are statements that can be read and understood multiple ways (including both Reformed Orthodox, and Neo-Orthodox).

I would like to commend the book, but I don't think that this is the place to start with Webster. I loved GWM even when I disagreed with it. This book took a lot more determination, and has statements that are easily misread (and unhelpful) if one has not read Webster before. I think it was more helpful than volume 1 of GWM, but far less accessible. All things equal, I'd recommend it. Things not being equal in reality, you should start somewhere else before going here if you have never read Webster before.
Read more
Helpful
Report abuse

Shepherd
5.0 out of 5 stars Excellent
Reviewed in the United States 🇺🇸 on March 7, 2014
Verified Purchase
This excellent theological work from seasoned theologian John Webster is now available in paperback... much more affordable than the hardback copy. The essays cover topics such as the doctrine of scripture, dogmatic ecclesial reasoning, and ecumenism. It is intended to be read together with the forthcoming companion volume, "God Without Measure."
Read more
2 people found this helpful
Helpful
Report abuse
See all reviews
Report an issue
Does this item contain inappropriate content?
Report
Do you believe that this item violates a copyright?
Report
Does this item contain quality or formatting issues?
Report