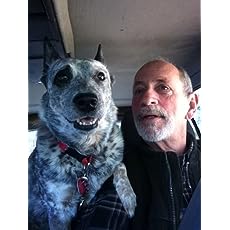 Don Miller is a retired high school social studies and science teacher and coach. Many of his students, players, and peers have found themselves the subject of his stories, along with his family, friends, and the unsuspecting, and in some cases unknown, folks he has encountered in life. Don's stories reflect both his Southern and rural roots along with a career in education and athletics.

Don is married to the former Linda Gail Porter,-Miller, also a retired teacher and coach and much to her chagrin, the subject of many of Don's stories. They live in the Dark Corner area of upstate South Carolina in the foothills of the Blue Ridge and share a ninety-acre wildlife preserve and farm with whatever animal or reptile happens by. 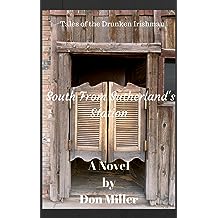 South From Sutherland's Station: Tales of the Drunken Irishman Nov 28, 2017
by Don Miller
( 3 )
$3.99
South From Sutherland Station is a work of historical fiction that takes place as the American Civil War ends. Ex-Confederate Soldier, Allen Kell Edwards finds himself embroiled in a dispute involving his new employer, the mysterious Creole Madam, Shailene Cote, and a group of land grabbers called the Trinity Group attempting to take over his home. Edwards also finds comfort and love in the person of ex-prostitute, Lucretia Noel. Action accelerates to a final showdown between the leader of the Trinity, Fredric Cox, and his henchman, the psycopath, Orie Ledbetter.
Read more
Other Formats: Paperback 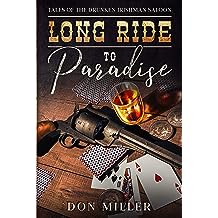 Long Ride to Paradise: Tales of the Drunken Irishman Saloon Nov 26, 2020
by Don Miller
( 3 )
$3.99
On a ninetieth birthday, it is natural to look back on one’s life and Allen Kell Edwards does just that. The Civil War, Reconstruction, and his battles with Fredric Cox and The Trinity, a group of Carpetbaggers who coveted the land he calls home are long over, but the dead are not forgotten…or forgiven. Allen Kell sees his life as clearly as yesterday…more clearly in fact. His was a life of great adventure, joy, and sorrow. The year may be 1934 but, in his mind, Allen Kell is swept back to 1874, his sweet Lucretia, and the battles to save Edwards Crossroads. From his saloon, The Drunken Irishman, his home at Edwards Crossroads, along with forays to New Orleans and into East Texas as a Deputy US Marshal, Allen Kell has memories to recollect before ending his “Long Ride to Paradise.” This is an action novel of historical fiction rooted during the period of the Reconstruction and the strife following the Civil War, climaxing with the Election of 1876.
Read more
Other Formats: Paperback 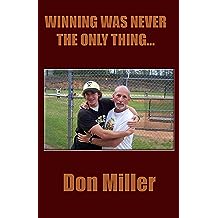 WINNING WAS NEVER THE ONLY THING... Oct 16, 2014
by Don Miller
( 15 )
$1.99
A quote widely attributed to Vince Lombardi, but actually first used by UCLA coach Red Sanders in the 1930s, “Winning is not everything, it is the only thing,” became the mantra for athletic coaches in the United States beginning in the early 1960’s. Lombardi did use the quote and due to his success as the head coach for the Green Bay Packers, the quote became widely accepted as a “coaching commandment”. It was used repeatedly on motivational locker room posters, at coaching clinics, in pregame speeches and during athletic banquets. Like many young coaches, I sang Lombardi’s “hymn” and began to worship before that “most sacred” alter known as “Southern Football”. Over time I discovered that while winning is certainly important and much more fun and preferable to losing, the people that I crossed paths with had become more important than the wins and losses themselves. Lombardi, himself, back pedaled on the quote saying that what he meant to say was “Winning is not everything but making the effort to win is.” After forty one years, I find that this quote to be much more preferable than the first.
If you are looking for a book about winning streaks or championship seasons this is not the book. While there are some stories about championship teams, his book is mainly about championship people. Forty one years of coaching and teaching yielded victories, both on the athletic field and in the classroom, but more importantly those years yielded many lifelong relationships with players, students and peers. These stories focus on relationships along with encounters that teachers and coaches confront eyeball to eyeball everyday. Some stories are also about the odd characters that we sometimes encounter as we go about the job we were called to do. Whether they were coaching or teaching colleagues, students and players, opponents or officials, most were or continue to be significant and important contributors to the communities where they live. Few are famous outside of their schools, districts or state where they served or performed. Most coached, taught or played the game not only for the accolades they received, but for the competition, the opportunity to serve and the friendships that developed. Sometimes poignant, sometimes humorous, these stories are about the people who impacted my life. They are the ones who wrote the stories and allowed me to share them with you. 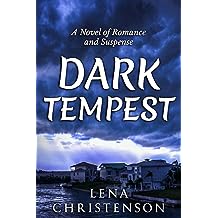 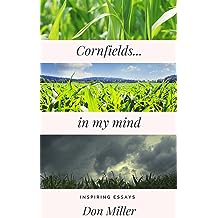 Cornfields...in My Mind Apr 7, 2018
by Don Miller
$2.99
In the song “He Went to Paris,” Jimmy Buffett explains, the old man “went to Paris looking for answers to questions that bothered him so.” Luckily, Don Miller never had to leave his upstate South Carolina home to find his answers…unfortunately, living there has only raised more questions.
Don Miller is a Southern paradox, sometimes an anomaly it might seem. He is a liberal leaning rebel despite Southern roots as deep as those of the kudzu plants eating the Southern countryside.
Cornfields…in My Mind are stories of subtle inspiration, motivation, humor, depression and injury, lost youth and of memories as rich as Folly Island shrimp and grits. They are all stories of hope.
Cornfields…in My Mind is NOT a memoir despite stories about the author and Miller is at his best poking fun at himself.
Adapted and rewritten from Miller’s blog, Ravings of a Mad Southerner, invest a little time and spend an enjoyable evening with Cornfields…in My Mind. You won’t be disappointed. 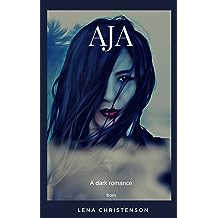 AJA Mar 1, 2018
by Lena Christenson, Don Miller
$1.99
AJA is a dark, contemporary, ADULT romance featuring a strong female lead character and very adult situations. This is not a book for youth or people uncomfortable with abuse. Aja overcomes sexual abuse, murder, and a suicide attempt to find her one true love...teaching her high school Sociology class. The three main characters are colorful, deep and real. Aja Rae, the high school senior who is overcoming a tortured youth. Waxhaw Collins, an injured baseball player finishing his student teaching practicum as he recuperates. Max Axmed, a backslid Somali Muslim who is Aja's mentor and Waxhaw's best friend. Despite roadblock after roadblock, this is a "happily ever after" novel.
Read more 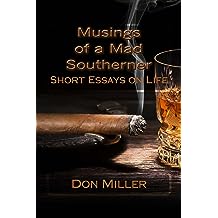 Musings of a Mad Southerner Mar 18, 2017
by Don Miller
( 1 )
$2.99
With the GENTLE insistence of a former student, now writer, now mentor, and forever friend, Jeri Lynn Cooper, I decided to test the blogging waters in 2015. She had insisted I was a natural and I decided to take her word for it. I am sure there are people who might disagree with Jeri Lynn after my two years of blogging history but it has allowed me to empty my head of all the content which “bothers me so.”
When I began to blog I was mad, as in angry. Dylan Roof had turned our state on its head, murdering nine church worshippers who didn’t look like him in the name of white supremacy. Our governor and legislative assembly promptly lit a firestorm over the needed removal of the Confederate Flag from our state house grounds. I was angry because of what I believed to be misplaced divisiveness over our Southern heritage as opposed to our racial hate. Neither side of the argument seemed willing to concede the other might have a point. Consequently, I decided on “Ravings of a Mad Southerner” as the title for my blog.
No matter. The flag is now gone, if not forgotten, and not a moment too soon in my way of thinking. Dylan Roof has been sentenced to die and I’m no longer angry about the divisiveness over the flag because that divisiveness has been replaced by a nationwide derisiveness over our new president.
As you are aware, mad can be defined as anger but also as mental illness or craziness or having enthusiasm for someone or something as in “I am mad about my wife Linda Gail or a big ole plate of shrimp and grits.” My madness and enthusiasm has taken over my anger and I have written about my wife, childhood, family, Southern paradoxes, food, friends, enemies, battles with my depression and “things that bother me so” such as my colonoscopy. I have blogged in anger over politics, bigotry and racism but will attempt to keep them to a minimum. I have decided to include many of my posts in a collection entitled “Musings of a Mad Southerner.” Unlike my blog, I will attempt to group them with rhyme and reason but can’t really guarantee I will be successful. Sometimes random rules my day and my madness. Yeah…random it is. 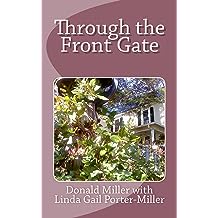 Through the Front Gate Aug 9, 2016
by Donald Miller, Linda Gail Porter-MIller
( 5 )
$2.99
For nearly thirty years I have entered “Through the Front Gate” to a home that is much more than just a place to lay my head. For more times than I can possibly count I have entered a haven and a refuge, made so by the woman that lives here, my Linda Gail. These are stories of love but not love stories. They are stories of the unintended consequences of Linda Gail.
Read more
Other Formats: Paperback 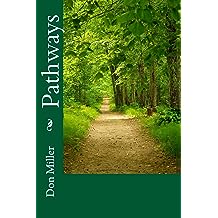 Pathways Nov 24, 2015
by Don Miller, Cynthia Carter
( 3 )
$2.99
Some thirty years ago the seed that would grow into this book was planted in my head when my wife Linda and I took pre-school daughter Ashley, now a mother and wife in her own right, to play in one of the many streams that cut our property. Frogs and their pollywogs, crawdads and minnows were in abundance along with a watermelon that I had placed into the dammed up stream to cool …just like my grandparents had done many, many years earlier. I had warm memories of picking red, vine ripened tomatoes and eating them whole for lunch before having a stream cooled watermelon split open for a sweet and refreshing mid-afternoon snack. I wanted Ashley to have some of the same experiences. Later as I struggled to get the watermelon out of the stream she pointed out, “Wouldn’t it been easier just to put it in the refrigerator?” Yep, and she doesn’t eat raw tomatoes either. Are you sure you are mine?
This is a recollection of growing up rural and Southern during the Fifties and Sixties but with an eye on the present.
Read more
Other Formats: Paperback 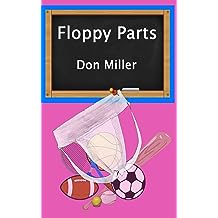 Floppy Parts Jun 9, 2015
by Don Miller, Jeri Lynn Cooper, Paul Burnett, Cyndi Carter
( 6 )
$1.99
Have you ever wondered about an athlete’s foundation garments, Rasputin’s penis or the homophobic fear of pink? Don Miller irreverently gives us the straight poop on these and other subjects, whether you have wondered about or not, as he takes us on a whimsical journey through his life as it relates to his and other’s “Floppy Parts.”
Read more
Other Formats: Paperback