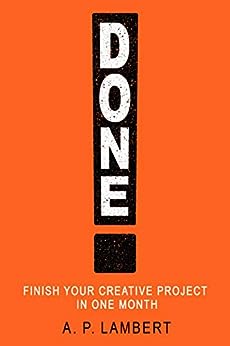 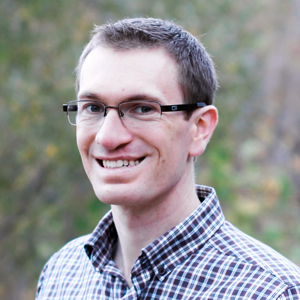 Done!: Finish Your Creative Project in One Month Kindle Edition

by A. P. Lambert (Author) Format: Kindle Edition
See all formats and editions
Sorry, there was a problem loading this page. Try again.
Done! is about finishing fast and finishing well. Whether you're starting a new creative project or picking one back up, Done! is the book to guide you through all the essential steps from start to finish within a timely manner—one month.
In this book, you’ll learn some valuable lessons, like how to invite ideas, ditch distractions, track time, and maintain momentum. You will have a clear goal and a plan for reaching it—all in ten short (and fun) chapters.
At long last, you’ll be excited and ready to take on the next project, and the one after that. No more dread, no more anxiety over all those loose ends. Finally, you'll have some relief and a product you can be proud of.
So, what are you waiting for? Pick up Done! and get on the fast track to a fantastic finished project.
Read more
Previous page
Next page

A. P. Lambert is an author and creative professional who helps other creative entrepreneurs achieve more and find purpose in their work.

He has dipped his figurative ladle in many a creative sauce-pot, even taken a heaping portion from a few. His experiences include character animation, graphic design, video editing, music (guitar and percussion), special effects, game design, painting, drawing, acting, and writing. He’s worked on hundreds of video game titles including Gears of War, Left 4 Dead, Dead Space, Uncharted, Call of Duty, Injustice, Mortal Kombat, and Resident Evil. He’s also worked on some films (Ninja Turtles, The Great Wall, Invictus, Tron Legacy), some commercials (like that first Kia Soul commercial with the dancing hamsters and the robots), and even an animated YouTube channel.

The creative force has been a major part of his life for as far back as he can remember. Whether it was making up a song to play on guitar, drawing pages and pages of undiscovered alien races, performing a Shakespeare play while dressed in motocross gear, designing board games from cereal boxes, or just throwing unusual ingredients into his lunch (salami and cheese waffle sandwich anyone?), he's always had a penchant for the new and unusual. While his true passion is creative writing (both fiction and non), he always has a few other projects in the hopper.

Aisling D.Top Contributor: Writing
2.0 out of 5 stars Well-intended, but vague. Nothing new.
Reviewed in the United States on June 29, 2021
Verified Purchase
I wanted to love this book. The cover design is excellent. The topic is likely to appeal to many creatives with unfinished projects collecting dust.

But, reading this book, I'm baffled to see five-star reviews (and raising an eyebrow). The author's advice seems well-intended, but I saw nothing that was new. This same advice is on hundreds of websites, where being vague can reach a very broad audience.

In a book...? No, I expected something more specific or unique. Instead, it reads a like it was assembled by AI. And frankly, it may have been. (Well-edited AI, but still rather suspect.)

The advice is good, but bland. I kept hoping the author was building up to something new or different or energizing. I'm almost embarrassed to admit that I kept reading, and reading, and reading... until it became clear the book is mostly platitudes.

If the author had been as original with this book as he was with his author bio, the book might still be on my Kindle and I'd be leaving a four-star review.

It wasn't. And I deleted the book, relieved that it had been free, so I didn't need to ask for a refund.
Read more
6 people found this helpful
Helpful
Report abuse

Pinky
1.0 out of 5 stars Waste of Time
Reviewed in the United States on May 29, 2019
Verified Purchase
Giving this one star because the author did some research so she could use others quotes in this book, otherwise it doesn't even rate! I found nothing useful in this book. Pure waste of time
Read more
7 people found this helpful
Helpful
Report abuse

J. Cross
3.0 out of 5 stars Project Completion Steps
Reviewed in the United States on December 11, 2018
Verified Purchase
This book gives steps to complete your project. The author gives information for planning your goal, gaining momentum, avoiding distractions, and what to do if you do get off track.
Read more
4 people found this helpful
Helpful
Report abuse

Amazon Customer
5.0 out of 5 stars A No Nonsense Approach to Creativity
Reviewed in the United States on January 6, 2020
Verified Purchase
Whether you're starting your first creative project or a seasoned creative, this is definitely a book you'll want to read and implement as you go through it.
Read more
2 people found this helpful
Helpful
Report abuse

Mysticmuse1979
4.0 out of 5 stars Finally a how to for creativity
Reviewed in the United States on May 18, 2019
Verified Purchase
The book was interesting. I did choose to read it in one day. It is encouraging me to get back to my second story. I have e published a novella and am probably halfway through the second.
Read more
One person found this helpful
Helpful
Report abuse

BigDaddy
5.0 out of 5 stars A solid, motivational read
Reviewed in the United States on November 2, 2020
Verified Purchase
This book not only laid out a plan for completing projects, but it included stories to help readers understand each parts' importance. Well done!
Read more
Helpful
Report abuse

John Holloway
5.0 out of 5 stars Good book that brings awareness for completing what you start!
Reviewed in the United States on August 12, 2020
Verified Purchase
I liked the momentum chapter the best. It only took a little more than an hour to read. A good investment of my time that will pay off big time!
Read more
Helpful
Report abuse

QRamone Reads
5.0 out of 5 stars Productivity for Creativity
Reviewed in the United States on March 1, 2020
Verified Purchase
What I enjoyed about this book is that it provided the issues and solutions for completing projects. As a creative, I’ve been victim to many of these pitfalls in bringing a task to completion.

I would recommend this book for any chronic multitasker.
Read more
2 people found this helpful
Helpful
Report abuse
See all reviews