Don't Gobble the Marshmallow Ever! and millions of other books are available for Amazon Kindle. Learn more 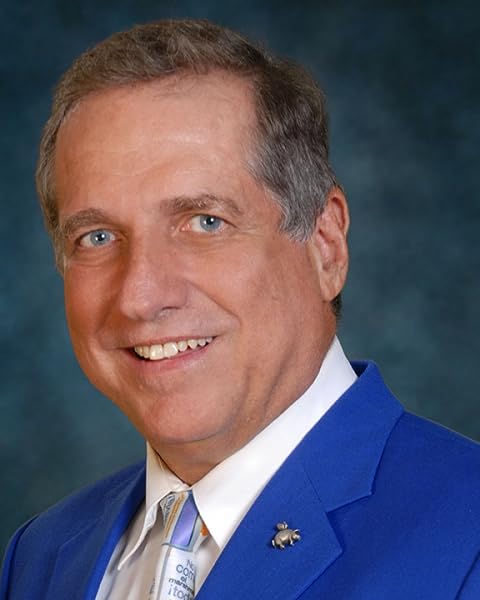 Don't Gobble the Marshmallow...Ever!: The Secret to Sweet Success in Times of Change Hardcover – November 6, 2007

by Joachim de Posada (Author), Ellen Singer (Author)
5.0 out of 5 stars 18 ratings
See all formats and editions
Sorry, there was a problem loading this page. Try again.

Joachim de Posada, Ph.D., is a bilingual public speaker, radio personality, author, and columnist who has provided motivational coaching for the Milwaukee Bucks, the Los Angeles Lakers, and the Panamanian Olympic team. His clients include Verizon, Pfizer, Kodak, Xerox, 3M, and Continental Airlines, among many others. He is the author of How to Survive Among the Piranhas.

Ellen Singer is the award-winning author of the acclaimed memoir Quicksand: One Woman's Escape from the Husband Who Stalked Her.

Start reading Don't Gobble the Marshmallow Ever! on your Kindle in under a minute.

Dr. Joachim de Posada is a highly qualified international motivational speaker and author based in San Juan, Puerto Rico, and Miami, Florida, who is fluent in English and Spanish. He specializes in sales, management, leadership and team building and has worked in more than fifty countries and the United States.

Dr. Posada holds a Bachelors degree in Business Administration from the University of Puerto Rico, a Master's degree and a Doctorate in Psychology.

Serving as Director, Learning Systems Division of Xerox Corporation based in Stamford, Joachim had the best research in the industry available to him and participated in the development of some of the most successful sales training programs available today. He then became a consultant for Learning International and Achieve Global after the division was sold to Times Mirror Corporation. He helped Franklin Covey Corporation expand to Latin America, working both in their international and domestic divisions.

He has been an adjunct professor at the University of Miami since 1988 teaching Leadership, Psychology Applied to Sales, Negotiating Skills and Time Management.

Dr. Posada has traveled with his message, energy and passion on stage to address audiences in more than 60 countries. Some of his clients include Exxon Mobile, Merck, Verizon, Baxter, BBVA, the US National Guard, Sprint, Amadeus, American Airlines, and others.

His motivational methods have been so successful that they have been transferred to the sports world. In the past he has been a consultant in Sports Psychology for the NBA's Milwaukee Bucks, the Los Angeles Lakers,The New Jersey Nets, Puerto Rican Professional teams and Olympic teams, motivating the players to achieve higher levels of performance.

This combination of Academia, Corporate, and Sports has given Joachim a unique perspective in putting proven principles to work to motivate and inspire people to new levels of excellence. This blend of experiences is guaranteed to have four synergistic effects on your business:

He is the lead author of several books, including:

* "Don't Eat the Marshmallow...Yet: The Secret to Sweet Success in Work and in Life" named the best book of the month by the New York Times and published by Penguin. This book has been translated into eighteen languages and it is now an international best seller having sold more than 2 million copies since its publication on Sept, 2005.

* "Keep Your Eye on the Marshmallow: The Fastest Way to Gain Focus and Resilience--And Come Out Ahead in Hard Times" will be published on May 7, 2013. It is the third book in the continuing series and was co-authored by Bob Andelman (Built From Scratch, The Profit Zone, Mean Business, Mind Over Business).

* "How to Survive among Piranhas: Motivation to Succeed" has been a bestseller in Latin America and in Korea. This book was published by Planeta, the largest Spanish publisher in the world and the seventh largest in the world.

Presently, Dr. Posada writes a weekly column in the Business Monday Section of the Puerto Rico Daily Sun and has a daily motivational capsule three times a day in WOSO, the only commercial English Radio Station in San Juan, Puerto Rico..

He served as director on the board of the National Speakers Association for the year 2008-2009.

* Named in 2009 one of 25 Hot Speakers in the United States who are shaping the speaking profession by Professionally Speaking, the National Speakers Association magazine.

* Awarded Most Distinguished Hispanic Speaker in the United States in 2007 at the US Hispanic Chamber of Commerce Convention in San Juan, P.R.

* Speaker at TED U. in February 2009 and his session posted at www.ted.com surpassed one million hits.

all rolled in one ... and he does it in two languages!"--Ray Pelletier

Moonstone Star White
5.0 out of 5 stars Planning for Abundance and a Happy Retirement
Reviewed in the United States on July 10, 2008
Verified Purchase
At first glance this book seems like simple fiction with life lesson material that many are already familiar with: conservative spending while planning your nest egg, setting realistic goals and planning ways to reach them. The story, however, is surprisingly powerful in an understated and subtle way. In fact the strength of it sneaked up on me as I moved through the book.

At a time in my own life when I was working through a major life change, I found this book to be a terrific asset to my ability to be resourceful and focused. In fact, after I finished reading it one evening in bed, I got up and began writing down ideas to implement the author's principles and ended up working out issues and writing plans far into the night.

This is a great book to help readers become involved in manifesting a life path that more accurately reflects the desires of the heart, and offers practical suggestions to get moving in that direction.

At the same time it reminds readers to make allowances for the future by not only living within our means, but by savoring the fruits of our accomplishments (the marshmallow) in nibbles, rather than gobbling the entire fruit at one sitting.

For a society filled with entrepreneurs who have no focus, employees who hate their jobs and consumers with over-extended credit lines, this is a book that brings common sense and heart back into the mix of making a living while leading a meaningful life.

RSRodriguez
5.0 out of 5 stars Fresh insight to delayed gratification.
Reviewed in the United States on January 7, 2021
Verified Purchase
Delayed gratification! It is worth it and this is a great book to illustrate what that looks like. I like the story and it is very relevant to how we've been programed to gobble up everything we have.
Read more
Helpful
Report abuse

Teresa DC
5.0 out of 5 stars Recommending to my kids.
Reviewed in the United States on July 14, 2018
Verified Purchase
Easy read with a meaningful message!
Read more
Helpful
Report abuse

Roberto
5.0 out of 5 stars The best made better!!!
Reviewed in the United States on January 10, 2013
Verified Purchase
After reading the first book this was a must, it is worth the time. just wish i had read it earlier in life. I have bought more for my kids. This is a must for anyone at any time in Life, the sooner the better,
Read more
Helpful
Report abuse

Richard White
5.0 out of 5 stars Great follow up to Don't Eat the Marshmallow...Yet
Reviewed in the United States on July 15, 2013
Verified Purchase
Well written and definitely thought provoking. Made me re-examine my life on many levels and I will use his guidelines to improve. Now I can't wait to read the next book!
Read more
Helpful
Report abuse

Amanda M. Chaparro
5.0 out of 5 stars Great!
Reviewed in the United States on June 25, 2012
Verified Purchase
This book lived up to my expectations. I loved Don't Eat the Marshmallow...Yet! and this one was just as comparable. It's not only a great read, but one learns great life lessons. Everyone should read both of these books.
Read more
Helpful
Report abuse
See all reviews
Back to top
Get to Know Us
Make Money with Us
Amazon Payment Products
Let Us Help You
EnglishChoose a language for shopping. United StatesChoose a country/region for shopping.
© 1996-2021, Amazon.com, Inc. or its affiliates