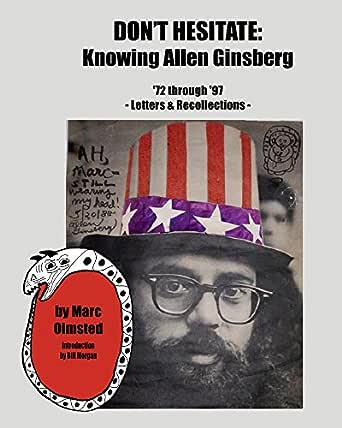 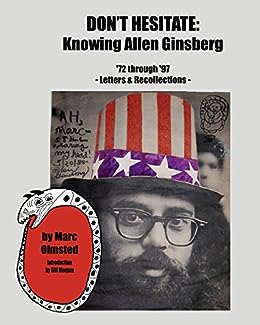 Marc Olmsted is a poet, musician, and film-maker who has worked with Allen Ginsberg, Timothy Leary, and William S. Burroughs. --This text refers to an out of print or unavailable edition of this title.

This book is a masterpiece -- the most intimate, knowing, frank, and hilarious memoir of actual poetic practice with Allen I've ever read. - Steve Silberman, writer for WIRED


Don’t Hesitate is a masterpiece of candor. It is beautifully written and designed, making it a pleasure to read and re-read. One would like to pigeon-hole the book and say that it is a collection of poems; a collection of letters; a memoir; a love story; a character study; a coming of age story; a guide to meditation and enlightenment; but it is not just one of these things — it is all of them. —Bill Morgan, author of THE BEAT GENERATION IN SAN FRANCISCO


Who better to illuminate on the life and times of an elder Allen Ginsberg than his longtime intimate and student Marc Olmsted? From 1974 onward from North Beach to the Naropa Institute’s Jack Kerouac School of Disembodied Poetics and elsewhere the Beat master engaged Olmsted‘s eager attention. Readers will delight in the insight that has emerged from that comradeship. —Neeli Cherkovski, author of HANK: THE LIFE OF CHARLES BUKOWSKI


Olmsted’s sinuous poetry moves on the page… thoughts at the instant they become muscular movements. —Michael McClure, author of HYMNS TO ST. GERYON AND OTHER POEMS
--This text refers to an out of print or unavailable edition of this title.

4.8 out of 5 stars
4.8 out of 5
4 customer ratings
How does Amazon calculate star ratings?
Amazon calculates a product’s star ratings based on a machine learned model instead of a raw data average. The model takes into account factors including the age of a rating, whether the ratings are from verified purchasers, and factors that establish reviewer trustworthiness.
Top Reviews

Charles Goldman
5.0 out of 5 stars Authentic poignant memoir
Reviewed in the United States on June 3, 2015
Verified Purchase
This is an authentic memoir of an extraordinary life. The fact that it involves Allen Ginsberg only adds to the poignancy of this work. For anyone who has lived through this time and these places, this is required reading. For anyone else read this to see what it was really like!
Read more
3 people found this helpful
Helpful
Comment Report abuse

That's the story Marc Olmsted tells in this memoir.

Complete with an intro by noted Ginsberg archivist & biographer Bill Morgan, and full of unpublished letters between the bearded bard and the aspiring acolyte, this road trip takes you from their first meeting in the '70s through Allen's death in 1997.

Along the way there's lots of sex, drugs, rock & roll, and madness of the nut house variety. There's vivid scenes inside the indi movie world of L.A., the punk scene in S.F., the drug dens of N.Y., and the meditation sanctuaries in Boulder. The narrator is a poet, painter, lead singer, script writer and general bohemian bon vivant who lived to tell the tale of drunken stupors, pansexual trysts, A.A. meetings, bad poetry and good.

And the colorful linear narrative is augmented with a scrapbook collage of hand-written letters and postcards from Allen, photographs, film strips, show posters, lyric sheets, script excerpts, newspaper clippings, you name it, all telling the candid story of a long day's journey into light.

In fact the opening word of the book — Bill Morgan's introing "Candor" — is the operative word for the entire endeavor. The author doesn't try to come across like he was some secret Peter in Allen's life, but rather is quite openly confessional about his screw-ups, his insecurity, his being too drunk to remember, his bad choices — ya know, like real people's lives. It ain't all pretty. But it's pretty page-turning.

And if you're a fan of the Beats, it's chock full of both major and minor characters you'll know. There's Gregory being a pain and McClure being a host. There's Steve Silberman writing articles and Chris Felver taking pictures. There's tender-hearted Buddhists and hollow-eyed junkies. There's dreams of literary immortality and morning afters of poet's poverty. And overall there's the arc from '70s hedonism through the downer of AIDS and the Reagan years into the collective maturity of the '90s.

With the passing of all but a handful of the Beat founding fathers (and mothers) we're now in an era where it's left to the disciples to spread the gospels. And the best of them, like Olmsted, have learned their lessons well and morphed quite naturally from student to teacher.
Read more
4 people found this helpful
Helpful
Comment Report abuse

Tusi Tala
5.0 out of 5 stars Don't Hesitate to Read This Book
Reviewed in the United States on March 30, 2018
Mark Olmsted, a poet and artist in his own right/write (his painting of Kerouac hangs in The Beat Museum in San Francisco) provides an honest, raw account of his close friendship/relationship with Allen Ginsberg, including facsimiles of letters between the two, photos and an exchange of the iconic poet critiquing one of the author's poems. Very insightful about both men and a good read for anyone interested in the Beats beyond their printed works.
Read more
Helpful
Comment Report abuse
See all reviews from the United States