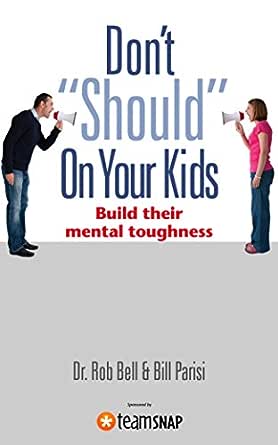 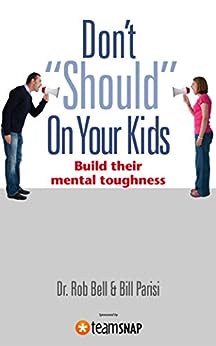 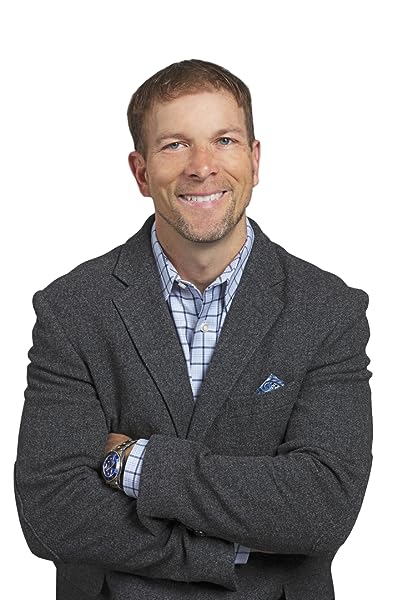 Don’t “Should” On Your Kids: Build Their Mental Toughness Kindle Edition

"As an NFL head coach, when a bad play occurs, we need to move on and focus on the next one. As parents, the best focus means enjoying the process of our kids' journey and being supportive along the way. Dr. Bell and Bill Parisi's book helps with our kids and our own mental toughness." -- NFL Head Coach Chuck Pagano

"Just like in The Hinge, this book provides both parents and coaches with simple, actionable steps to help their athletes develop mental toughness. I highly recommend it." -- John O'Sullivan, Author of Changing The Game.

Don't Should on Your Kids includes many practical thoughts for parents including one of my favorites, "Great parents ask their kid, 'How was your day?' not just 'How was your practice?'" -- Jim Thompson, Positive Coaching Alliance Founder --This text refers to the paperback edition.

We over me... --This text refers to the paperback edition.

4.6 out of 5 stars
4.6 out of 5
70 global ratings
How are ratings calculated?
To calculate the overall star rating and percentage breakdown by star, we don’t use a simple average. Instead, our system considers things like how recent a review is and if the reviewer bought the item on Amazon. It also analyzes reviews to verify trustworthiness.

Amazon Customer
5.0 out of 5 stars Wish I would have found this when my kids were younger.
Reviewed in the United States on May 13, 2017
Verified Purchase
I'm a high school mountain bike coach with two student athletes. I have successfully coached my kids in most youth sports from soccer to baseball. Focusing on player development was easy for me until training them in this sport which I am so personally passionate about. This book painfully illuminated for me the pressure I have placed on my older son who rides Varsity for the team. I have lived vicariously through his wins and losses and he shared with me last year that it had lost it's fun. He has come back this year better than ever by my taking a more relaxed approach and following some of the lessons from this book.
This book is for all coaches and parents, but especially those of you like me who try to do both. The book teaches the simple truth that it is all about the kids, period.
I've never written a book review before, but this was worth my time to share with you the importance of this book to all involved with youth sports.

Jacqueline S Stein
5.0 out of 5 stars I've learned the value of staying neutral so my athlete can process and grow from her own experiences.
Reviewed in the United States on July 13, 2018
Verified Purchase
My 15-year-old daughter was having some growing pains with competitive swimming, so I asked her swim coach to recommend a book. I am so glad he suggested I read this book written by Dr. Bell. It helped me realize the importance of maintaining a position of neutrality for her benefit. As her mother, I am "her person", meaning the one who hears all her out loud processing whenever she is experiencing a change. Before I read the book, I was feeling like I always had to do or say something when she would do this with me. I've now learned that staying neutral in most situations, both bad and good, gives her a solid foundation to process through her emotions so she can continue to grow. His advice about the car ride home and doing less rather than more to help build confidence have totally changed the way I intend to parent in key moments. It's not easy to implement his advice, but it is game changing. More than anything having the frame work to be aware of when I should step away, keep quiet, and do less has helped shift the dynamic of our mother-daughter relationship. I'm incredibly grateful to Dr. Bell and look forward to reading his other books.
Read more
5 people found this helpful
Helpful
Report abuse

Buy2Much
5.0 out of 5 stars A must read for parents of young athletes
Reviewed in the United States on September 1, 2019
Verified Purchase
This book has opened my eyes and not only in sports but also in !ife. Great book and very helpfull!
Read more
One person found this helpful
Helpful
Report abuse

AMBP
5.0 out of 5 stars Changed my parenting style for the better!!!
Reviewed in the United States on February 9, 2017
Verified Purchase
This read has given me so much inner peace as a mom of 2 teenage boys who are student-athletes. I have changed parenting styles and given them more responsibility and decision-making. It's amazing...they are both doing what needs done!
Read more
4 people found this helpful
Helpful
Report abuse

TBub86
5.0 out of 5 stars I say...you SHOULD read this book..if you truly want to help your children grow as athletes.. Oh, and as individuals, too.
Reviewed in the United States on November 30, 2015
Verified Purchase
What a great book! As a career athletic coach, I am nodding the whole way with great insight into the world of my athletes' and their 'other side' of influence (parenting). But, as a dad of three student-athletes, I am biting my lip as I look inside myself. What an awesome flick between the eyes of a wake-up call to parents (including myself). I am, again, nodding and smiling during such a simple approach that is so true about parenting young and advanced athletes alike.
Read more
2 people found this helpful
Helpful
Report abuse

Brooke-Randolph
5.0 out of 5 stars Sportsball parents, please read this
Reviewed in the United States on September 27, 2016
Verified Purchase
Dr. Bell works with athletes and families that are striving to be top level, but I think this book would be great for any parent with a child in any form of athletics, even T-ball. How we talk with kids matters and how we talk with kids about sports matters for their enjoyment, ability to learn the important lessons sports can provide, as well as their achievement.
Read more
One person found this helpful
Helpful
Report abuse

Lisa A. O'Connor
5.0 out of 5 stars Must Read
Reviewed in the United States on January 7, 2016
Verified Purchase
This book is a must read for all parents of athletes. My only regret is not reading this book sooner. I just bought an additional copy for another parent and purchased The Hinged. How we actually need to communicate with our child/athlete no matter how old is enlightening. My twins are in High School and I will use this book as my bible during some very difficult competitive times. It's truly interesting to see if you truly are the "supportive" parent, or have you become "vicarious "?
Read more
One person found this helpful
Helpful
Report abuse

Amazon Customer
5.0 out of 5 stars This book taught me quite a bit because I was basically doing everything wrong. Its not that easy in the competitive world of kids sports, I need all the help I can get as a parent!
Reviewed in the United States on August 24, 2018
Verified Purchase
This book will definitely help me navigate through this competitive world of kids sports. I did not know what I was getting myself into!
Read more
Helpful
Report abuse
See all reviews

K.
4.0 out of 5 stars Good book for improving morals
Reviewed in the United Kingdom on December 27, 2015
Verified Purchase
This is a nicely written book that can be easily read by parents, grandparents, as well as other people that work with children.
The title of the book really does tell what the book is about, so readers are going to know what they are getting them in for. During the Olympics and Paralympic games in London, volunteers were consumed with the passion to tell others what they needed to do to run a successful games. They say you should do this, you should do that. While this is helpful for people in despair, telling other volunteers what they should and shouldn't do was a bit patronising. This book backs up my thoughts on this matter but was written much better than what I could.
The book also goes more in depth about the process that parents get into for the should have, should do mentality of kids these days in the western English speaking world. Perhaps that may change of the readership of this broadens.
Easy read, as there aren't took many books that takes me a few hours to read cover to cover.

I. Perez
1.0 out of 5 stars Hatchet job
Reviewed in Canada on March 3, 2019
Verified Purchase
Ostensibly, the message of the book is that children are overprogrammed and that parents have unrealistic expectations for the athletic success of their offspring. Most kids, even those who enjoy sports, are extremely unlikely to make it anywhere close to a college scholarship. So far so good, there's little to disagree with that. But the book appears hastily slapped together, could use a good editorial brush, and reads like the authors have re-used much material from earlier books. In particular, their examples are either obviously made-up for the purpose of the message, or are all from extremely high performing athletes who overcame a setback, which is contrary to the message itself.
The authors also completely miss the point when they discuss our American/Canadian approach to youth sports. It's not helpful to "not keep scores or standings" until the kids turn 13. Even at age 8, the kids know the score at the end of a game, and they know how many matches their team lost during the season. What matters far more is too-early cutting and selection. For many sports (hockey in Canada is perhaps an exception, but it has other problems) there are only two levels: fully competitive rep teams, and house league that is "just for fun." It might be better to keep the game competitive at all levels, but make sure there are levels for everyone - very much like team sports are organized in Europe. Everybody can be on some team, and every team can compete, just not all in the highest tier.
Read more
Report abuse

Doug Lawrie
5.0 out of 5 stars A MUST READ!
Reviewed in Canada on March 22, 2017
Verified Purchase
If you think you know it all regarding your child and sport.....you don't! Dr. Bell does a masterful job painting a clear picture of how to raise great kids in sport. Do your parenting a favour. Read this. Tell everyone.
Read more
Report abuse
See all reviews