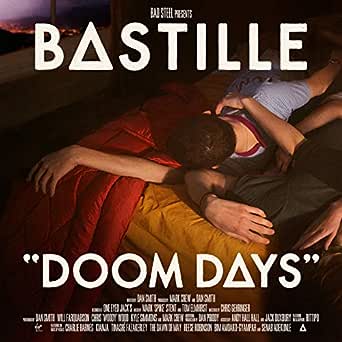 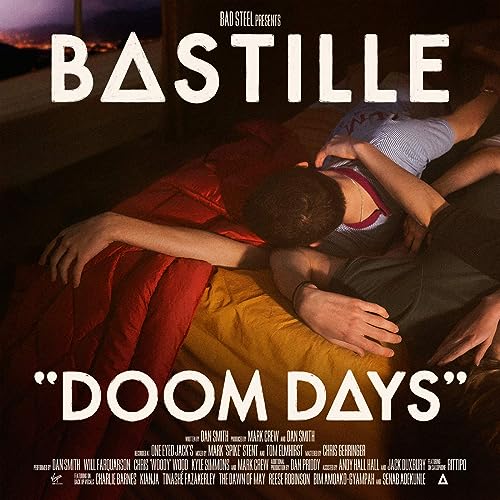 Jason Stein
3.0 out of 5 stars We're the losers on the backs seats singing, "Love will tear us apart".
June 22, 2019
Format: MP3 MusicVerified Purchase
The very thing I like about Bastille is also their achilles heel--that they remind me of Coldplay, Keane, OneRepublic, Imagine Dragons and the like. Over three albums Bastille has not yet been able to shake their roots. They tend to come off as a pastiche of those other, better bands.

Still, there is something to be said about an artist that can at least give you five or six good songs on every album they release. Perhaps Bastille is better viewed from the angle of a singles band. They are very good at making singles, but all three of their albums are uneven, even repetitive, in fact.

"Doom Days" is no different. The hits are obvious such as album opener "Quarter Past Midnight" followed by "Bad Decisions". "The Waves" and "Divide" are interesting ballads, and I wanted to really like both of them, but they just kind of sit there, waiting for a bigger riff and chorus. "Million Pieces" is good, but rather derivative and standard Bastille. The title track's commentary on ourselves as a society is different, but the music doesn't quite do the lyrics justice.

On the back half of the album things continue to backslide with what I feel to be the two weakest tracks here, "Nocturnal Creatures" and "4AM". Both of these songs are not as memorable as the others and really felt like album filler. But things end on a high note with three solids songs to close out the album--"Another Place" has a real strong hook, "Those Nights" finally captures the art of the ballad with a memorable riff and chorus, and finally, "Joy" ends things on a high note, also with a strong melody and chorus.

So, five really strong tracks here out of 11. Bastille continue to show promise, but ultimately they may end up being more like Duran Duran before them--a singles band, and a great one at that.

Here's how "Doom Days" compares to Bastille's other work:

Rebecca Garroch
5.0 out of 5 stars “Those Nights” when you need a good song....
August 10, 2019
Format: Audio CDVerified Purchase
I have been a Bastille fan for quite a while now. When I listened to Doom Days though, it was a game changer. This album is PHENOMENAL. I have listened to it back to back more times than I can count since it came out in June. The lyrics to these songs just move me in ways I can’t describe. I love them for that very reason. It is so rare today to find musicians capable of writing their own music with depth and feeling. I will agree with others that this album is more “poppy” than their previous two albums but I still think it’s absolutely amazing music. The best Bastille album yet.
Read more
5 people found this helpful
Helpful
Comment Report abuse

Amazon Customer
5.0 out of 5 stars Great Follow Up to Wild World
August 6, 2019
Format: MP3 MusicVerified Purchase
It's a fantastic album to follow up on the themes of Wild World. Feels warm and desperately sad all at once. It's like they took Warmth and Snakes, combined them, then separated them back out into 11 songs. Is it an apocalypse or nihilism on Dan's lips? Either way, it's affirming.
Read more
2 people found this helpful
Helpful
Comment Report abuse

Carol Ann Matscherz
5.0 out of 5 stars Bastille is the best!
August 30, 2019
Format: Audio CDVerified Purchase
Bastille does not disappoint! What a talent for singing this group has! I enjoy each and every song!
Read more
2 people found this helpful
Helpful
Comment Report abuse

Kayla D. Wood
5.0 out of 5 stars Just as good as the others
July 18, 2019
Format: Audio CDVerified Purchase
I love this CD. I find it a little bit slower than their past CDs. On tour now.
Read more
One person found this helpful
Helpful
Comment Report abuse
There are 23 customer reviews and 57 customer ratings.
See all 23 customer reviews
Write a customer review

Page 1 of 1 Start overPage 1 of 1
This shopping feature will continue to load items when the Enter key is pressed. In order to navigate out of this carousel please use your heading shortcut key to navigate to the next or previous heading.
Back
Next
Look for similar items by category