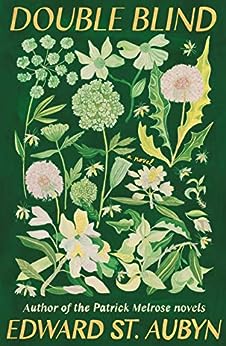 “Double Blind is always interesting because St. Aubyn is exacting. He takes all of this book’s topics seriously; he distills them and gives them all a good shake . . . [Ian McEwan] isn’t the only novelist unafraid of serious thinking about technology and science. A.S. Byatt, Richard Powers, Rivka Galchen, Martin Amis, Barbara Kingsolver and the playwrights Tom Stoppard and Michael Frayn are among the others. With Double Blind, St. Aubyn joins their company.” ―Dwight Garner, The New York Times

"[St. Aubyn] has a way of dealing with heavyweight themes with bantam agility . . . [Double Blind] jabs and dances and dazzles as it manages the neat trick of turning such weighty topics as neuroscience, ecology, psychoanalysis, theology, oncology, and genetics into a sparkling entertainment that challenges as it delights . . . In this devourable novel, St. Aubyn is a wielder of diamond-sharp sentences that cut to the essences of family and love, friendship and rivalry, ambition and mortality.” ―Mark Rozzo, Air Mail

"If, as Henry James said, the first duty of the novelist is to be interesting, he would be happy in St. Aubyn’s company. Double Blind is emotionally cogent and intellectually fascinating. There are reflections and conversations here which adroitly evoke those important intersections where science and our urgent contemporary concerns meet. I was gripped by it." ―Ian McEwan

"A rollicking tale of love and science in a world increasingly hostile toward both . . . Hectic―but very funny." ―Amy Brady, Scientific American

"St. Aubyn expounds on epigenetics, rewilding, art, neuroscience, and philosophy in this sublime character-driven novel. With his usual elegant prose, St. Aubyn follows three friends―Francis, Olivia, and Lucy―through a transformative year . . . St. Aubyn brings off a seemingly effortless and provocative examination of the mind and its refractions. This one’s not to be missed." ―Publishers Weekly (starred review)

“[An] elegant, carefully plotted tale . . . More humorous but just as intellectually inclined as Richard Powers . . . St. Aubyn explores human foibles even as he brilliantly takes up headier issues of the human brain in sickness and in health . . . Thought-provoking, [and] smartly told.” ―Kirkus Reviews (starred review)

"Double Blind is a book of big ideas, in which the characters experiment with medicine, psychology, narcotics, religion and meditation to understand themselves and find peace. But as cerebral as the book is, it is also deeply felt, because St Aubyn has been thinking about these issues for decades." ―Hadley Freeman, The Guardian

"This is a novel with heart . . . Double Blind is both clever and compassionate, confirming St Aubyn as among the brightest lights of contemporary British literature." ―Alex Preston, The Spectator

"Shakespearean in scope and tone, moving from the intimate to the universal within paragraphs and providing tragedy, comedy and human frailty . . . A less practised author would run the risk of over-saturating all the disparate strands, but St Aubyn offers comment on the natural world, genetics, family dynamics, philosophy, psychiatry and ecology without forgetting the tapestry-like threads of the story itself-and provides a satisfying resolution to boot . . . Brimful of energy, this novel asks big questions―'How could one ever truly enter into another subjectivity?'―without giving us all the answers." ―Zoe Apostolides, Prospect

"Likeable and rounded characters and a celebration of the best things in life: the wilderness of Knepp and a touching but complex love story . . . St Aubyn's reinvention as a writer is heroic and astonishing. He has emerged from the 'very difficult truth' of this childhood to write brilliantly about that and, now, about a lot more." ―Bryan Appleyard, Sunday Times

"There is in Double Blind a compassion that St Aubyn has elsewhere tended to either eschew or keep implicit. Despite the novel's acerbic edge, St Aubyn is attentive to his characters' suffering and vulnerability whatever their privileges . . . St Aubyn's prose is as elegant as anybody familiar with his previous work might expect." ―Luke Warde, Irish Independent

"This is the best kind of novel of ideas, as entertaining as it is chewy, not to mention immensely pleasurable on the sentence level." ―Stephanie Cross, Daily Mail

"St Aubyn has lost none of his ability to create rounded characters . . . and the witty dialogue is well up to the standard of the Melrose books." ―Jake Kerridge, Daily Telegraph

Edward St. Aubyn was born in London. His acclaimed Patrick Melrose novels are Never Mind, Bad News, Some Hope, Mother's Milk (winner of the Prix Femina étranger and short-listed for the Man Booker Prize), and At Last. The series was made into a BAFTA Award–winning Sky Atlantic TV series starring Benedict Cumberbatch. St. Aubyn is also the author of A Clue to the Exit, On the Edge (short-listed for the Guardian Fiction Prize), Lost for Words (winner of the Bollinger Everyman Wodehouse Prize), and Dunbar, his reimagining of King Lear for the Hogarth Shakespeare project. --This text refers to the hardcover edition.

3.7 out of 5 stars
3.7 out of 5
95 global ratings
How are ratings calculated?
To calculate the overall star rating and percentage breakdown by star, we don’t use a simple average. Instead, our system considers things like how recent a review is and if the reviewer bought the item on Amazon. It also analyzes reviews to verify trustworthiness.
Top reviews

J. Roose
5.0 out of 5 stars Fantastic
Reviewed in the United States on June 6, 2021
Verified Purchase
This is not a book for everyone. It is not a beach book, but it is worth the effort to read it. Every page is filled with big ideas.
I have always enjoyed the Patrick Melrose novels. Double Bind is exceptional in it subject matter. Read it!

KasaC
TOP 1000 REVIEWERVINE VOICE
5.0 out of 5 stars St. Aubyn does it again
Reviewed in the United States on June 6, 2021
How is it that Edward St. Aubyn can write so confidently about so many deep and disparate subjects. In this ambitious exploration of the effect of business on science, he presents three central characters, Olivia, Lucy and Francis, and those that comprise the world around them, all with agendas and situations exposing ills of today's world minus the pandemic. For the deliciously named Hunter Sterling acquisition is all, never mind what effect it has, but as he becomes less coked up and "less fun," he does show signs of humanity. And he is not even one of the major characters. But all these characters illustrate matters relating to climate change, dna research, schizophrenia (and to a lesser extent, bipolar disorder), cancer, among others. Which is a long way of saying that for a relatively short book, Double Blind covers a lot of territory.

However, for me, there is a weakness here -- the timing of this engrossing novel's publication cannot be ignored as it seems to be set in an alternative present, one that would exist if there weren't a worldwide lockdown. Since the book is so strong, my mind kept going back to that fact and wondering what St. Aubyn would have written if he had incorporated today's realities in his book.

Kindle Customer
1.0 out of 5 stars Absolutely preposterous
Reviewed in the United Kingdom on March 21, 2021
Verified Purchase
I was aghast when I finished this book. Such a load of pompous pontification interspersed with incredibly thin characters is to be wondered at. I have read the Patrick Melrose books and much admired them....that Mr. St. Aubyn honestly thought that this ridiculous accumulation of "scientific" treatises and philosophical ramblings amount to a novel beggars belief . Cannot imagine what the publishers were thinking...
Read more
13 people found this helpful
Report abuse

Mrs Susan Marshall
3.0 out of 5 stars Disappointing
Reviewed in the United Kingdom on April 2, 2021
Verified Purchase
Intersting but too clever by half - too many words digressions. The main characters and their relationships were not credible. Disappointing as I had greatly enjoyed this author's previous work
Read more
4 people found this helpful
Report abuse

London book lover
5.0 out of 5 stars A masterpiece!
Reviewed in the United Kingdom on April 5, 2021
Verified Purchase
This is a masterpiece! One of the most profound, gripping and entertaining novels I have ever read. These characters will stay with me for the rest of my life. Also, I love how the author is exploring and synthesising some of the most pressing topics of our time in such an original way. Highly recommend it!
Read more
3 people found this helpful
Report abuse

Usually happy shopper
4.0 out of 5 stars Interesting book
Reviewed in the United Kingdom on April 7, 2021
Verified Purchase
This is the first book by this author I have read.
I appreciated the science background of the book and enjoyed how the relationships between the main characters developed.

Mrs. W. Medd
2.0 out of 5 stars Too much waffling and flowery language detracts
Reviewed in the United Kingdom on April 12, 2021
Verified Purchase
I was hoping for a book that carried me along with the story. Here, the author is clearly too fond of his own voice and in trying to show off his clever use of language completely detracts from the story.
There is too much superfluous and flowery prose. A shame.