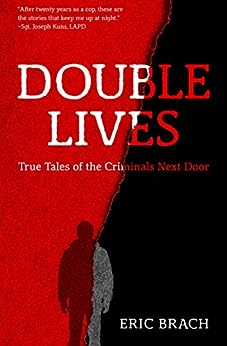 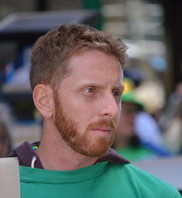 Eric Brach is a lecturer in the Police Orientation Preparation Program at West Los Angeles College. He also serves on the Board of Directors for Writers Blok, a non-profit organization that provides support to writers and their work "In researching Double Lives: True Tales of the Criminals Next Door, Eric Brach was meticulous in his devotion to expose the sociopathic character of his subjects." Michael F Matassa, ATF Special Agent (retired) "What makes Double Lives so terrifying is that these events are real. After 20 years as a cop, these are the stories that keep me up at night." -- Sgt. Joseph Kuns, LAPD --This text refers to the paperback edition.

Eric wakeboards out of flaming wreckage―or at least, his author photo on Goodreads does. The rest of the time, he teaches English at a collegiate program for students pursuing careers in law enforcement. Before turning to books, Eric wrote for The Onion and Bleacher Report, and he penned the screenplay for a Nintendo Wii game that most people didn't even hate. He lives in Los Angeles with his wife, his dog, and his unyielding certainty that eggs overeasy is the best food on earth. --This text refers to the paperback edition.

4.3 out of 5 stars
4.3 out of 5
74 global ratings
How are ratings calculated?
To calculate the overall star rating and percentage breakdown by star, we don’t use a simple average. Instead, our system considers things like how recent a review is and if the reviewer bought the item on Amazon. It also analyzes reviews to verify trustworthiness.
Top reviews

JustinWrites
5.0 out of 5 stars A Compelling and Entertaining Read
Reviewed in the United States on September 29, 2018
Verified Purchase
This book - broken down into short chapters that focus on "ordinary" Americans who committed a range of criminal acts - reminded me of the 70s and 80s, when there were a plethora of non-fiction books released about notorious Americans doing bad deeds. Back then I gorged on books like Robert Lindsey's "Falcon and the Snowman," Mark Baker's "Cops," Joe McGinniss' "Fatal Vision" and the Ann Rule true crime books.

Eric Brach now joins the pantheon of these writers' work with "Double Lives," a compelling and totally readable exploration of why certain people in our very own neighborhoods do the horrible things they do. Spanning the 20th century and into the 21st (in locales from CA to TX to NJ), these individual stories of menace and mayhem track the criminals from their (mostly) humble backgrounds and lower- to middle-class adulthood when the troubles bloomed. Little-known offenders like arsonist John Leonard Orr to famous perpetrators of evil like the BTK killer and child molester/congressman Dennis Hastert are profiled; Brach breaks down their lives, their seeming normalcy, and their horrific crimes - as well as the aftermath and their eventual capture.

In writing about these past crimes - instead of about current, unsolved horrors - the writer has the ability to allay some of the readers' fears of these "next-door" criminals by closing the circuit on them and concluding each chapter with their capture and prison sentences. None of the criminals get away with their crimes, and all are punished and put away so that the public can sleep just a little better knowing they no longer roam our streets our our neighborhoods.

The writer also makes the curious - but ultimately successful - choice of bringing his own personal history into the mix. Brach does this from the very beginning, explaining his interest in the subject of destruction and self-destruction by relating brief stories of the people he knows who have died. In the Introduction, and in two separate chapters, he inserts himself into the book with these stories of loss and addiction. In the two "Evan" chapters, he deals with his struggles of having consciously avoided contact with his childhood friend later in life, when the boy he met in Jr. High was now a man who had been in and out of rehab for serious drug addiction. It's a raw admission from a writer still conflicted about his own actions - and inaction - with regard to someone he considered a best friend in high school to a person who scared him enough to even skip his funeral.

These two chapters actually give the other chapters - and the other stories of criminals the writer has never met but has only researched - more resonance, and humanizes even the most horrific of these criminals by reminding us that these people could have been our neighbors, our co-workers, our classmates, or even our friends. Besides the fact that these bite-sized stories about the evil that lurks in the hearts and minds of men (and women) are engrossing and entertaining, these tales also generate our compassion for the criminals and the idea that if they had shared their demons with someone else, perhaps these crimes may have been stopped ... or never committed in the first place. In our current age of social media and oversharing, perhaps there are future crimes against humanity that may be shared and stopped before they even occur. It's our job as good citizens and neighbors to look for the clues from these people out to do harm (and self-harm) and reach out to them before they can destroy themselves or others.
Read more
9 people found this helpful
Helpful
Report abuse

Boston woman
3.0 out of 5 stars Interesting enough
Reviewed in the United States on September 29, 2019
Verified Purchase
But I was disappointed in the writing. Mr. Brach is a professor of English (his words), but his prose is often tortured. Sentences are unnecessarily complicated, and he sometimes tries too hard to use big words (though, to be fair, he at least uses them correctly).
Not sure how much his facts can be relied upon either. He attributes the Oklahoma City bombing to the Unabomber!? Um, no that was Timothy McVeigh. This should be basic knowledge for someone writing true crime.
All that said, I did enjoy the book, and it has led to me to look further into some of the cases mentioned.
I picked it up as a Daily Deal for 1.99, so I feel I got my money's worth. If I'd paid 10.49 I'd be very disappointed.
Read more
6 people found this helpful
Helpful
Report abuse

Amanda C.
5.0 out of 5 stars Excellent Stories That Review the Psyche of Criminals
Reviewed in the United States on August 26, 2018
Verified Purchase
I've always been a fan of Law and Order and Forensic Files and was familiar with a few of the stories that were included in this novel. However, watching those shows, I didn't really get the sense that these criminals were living among us. These highly engaging stories give you a better sense of the psyche of these criminals and the realization that these aren't fictional characters far, far away. These are actually real life friends, family or neighbors who may be living right next door. I also really liked how the author Eric Brach weaved in personal stories about people he knew from childhood who had become criminals later on in life. Overall, this was a very fascinating read, and I would highly recommend it to anyone! I'm looking forward to the next installment.
Read more
5 people found this helpful
Helpful
Report abuse

denas
5.0 out of 5 stars Fascinating Stories with Charlie Kaufman-esque Writing, A+
Reviewed in the United States on August 29, 2018
Verified Purchase
I am loving this book! It includes captivating stories about undercover villains, as well as engaging, relevant & relatable tales from the writer's own life. Double Lives is easy to read and hard to put down. I'd recommend it to your book club to broach conversations regarding your neighbor's every move.
Read more
3 people found this helpful
Helpful
Report abuse

Susan Dee
5.0 out of 5 stars Spellbinding
Reviewed in the United States on September 2, 2018
Verified Purchase
Eric Brach has the unique ability to vividly describe harrowing events and pathological human behavior
in a compelling and readable fashion. He shows that the depths of depravity can be hidden
in seemingly normal people. This frightening combination makes this an outstanding read which
you will not want to put down. I highly recommend this book and look forward to this
author’s next work Any of these stories would make a great movie . Hollywood take notice.
Read more
One person found this helpful
Helpful
Report abuse

Erin Conway
5.0 out of 5 stars Horrible people. Awesome book.
Reviewed in the United States on August 20, 2018
Verified Purchase
I've enjoyed reading many books over the years about horrible people, but this one is so unique. The way the facts are interwoven with the short story format and the writer's entertaining voice is perfect! Sometimes I feel a little guilty about being so entertained by true crime, but then I remember I'm a human being and this stuff is just downright fascinating. I'm not even kidding when I say I read the entire bibliography to find out where I can learn even more about these terrible people.
Read more
4 people found this helpful
Helpful
Report abuse

Jason Edelman
5.0 out of 5 stars Holy crap
Reviewed in the United States on August 24, 2018
Verified Purchase
This book made me suspicious of my neighbors, whom I am now convinced are murderers.

Jessica
5.0 out of 5 stars Great Ride for True Crime Fans (or Not)
Reviewed in the United States on September 13, 2018
Verified Purchase
There are stories in this great collection of people doing truly heinous things. True crime is not usually my genre, but I was drawn in by the way Eric Brach presents portraits of criminals and their acts. The book made me think differently about crime. Who are the people in our midst who brazenly break the law, and why do they do it? Why do we law-abiding bystanders miss the signs of their criminality? This was a very interesting and engaging read. Get yourself a copy!
Read more
One person found this helpful
Helpful
Report abuse
See all reviews

jc uk
4.0 out of 5 stars Good mix of stories
Reviewed in the United Kingdom on December 21, 2019
Verified Purchase
Enjoyed this book a differing mix of true accounts. I Will check out other books by this author. Highly recommend
Read more
Report abuse

Philip Turnbull
5.0 out of 5 stars great product
Reviewed in Canada on August 28, 2019
Verified Purchase
wife loves crime books and this is another hit
Read more
Report abuse
See all reviews