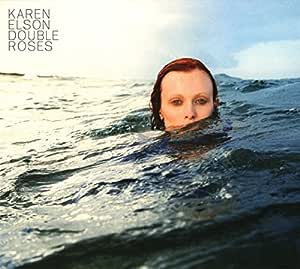 English-born, Nashville-based singer-songwriter Karen Elson releases her second album Double Roses via 1965 Records. Double Roses was recorded in Los Angeles, at the world-renowned United Studios (nee Ocean Way) in Hollywood, with producer Jonathan Wilson (Jackson Browne, Father John Misty, Conor Oberst). Elson, who had been writing and demoing songs throughout her recording hiatus of the past few years, spent three weeks in Los Angeles working with Wilson to put the album together. A long time fan of the sun soaked sounds of the 'Laurel Canyon' era, it was the perfect place to commit her songs to tape. The album features collaborations with an array of musical talent, including The Black Keys' Pat Carney, Father John Misty, Laura Marling, Benmont Tench, Pat Sansone (Wilco), Nate Walcott (Bright Eyes) and Dhani Harrison. Although it's been almost seven years since Elson last released a full length record - the Jack White-produced debut The Ghost Who Walks - she continued to work on a variety of musical projects over the years. Her appearances were infrequent but always dazzling, from performing "Ashes To Ashes" with Michael Stipe at the David Bowie tribute concert last year, to dueting with Ren Harvieu on the stunning single 'The Train Song', performing for T Bone Burnett's Speaking Clock Review, recording a haunting version of Lyle Lovett's 'If I Had A Boat' for the "Still Alice" movie soundtrack or releasing limited edition covers of Lou Reed or Jackson C Frank songs for Record Store Day. Growing up in a gritty industrial town in the North of England, music was Elson's first love and refuge, but it was the fashion industry which gave her the escape she was seeking. Plucked off the streets of Manchester as a sixteen year old schoolgirl, her rise to internationally recognized supermodel came early; she has been gracing magazine covers and working with the most respected designers and photographers in the world for over two decades

›
Visit Amazon's Karen Elson Store
for all the music, discussions, and more.