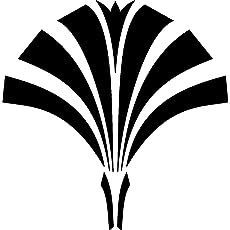 Douglas Milewski writes literary fantasies. He's heavily influenced by such writers as Gene Wolfe, Ursula LeGuin, and F. Scott Fitzgerald. While his heroes may sometime roam into places where they shouldn't go, in the end their sincerity leads them back into the light. Despite his highbrow literary ambitions, Doug confesses to a lifelong delight with schlock, especially giant monsters from 1960's Japan. He hasn't yet figured out how to put one of kaiju into a literary fantasy, but it's only a matter of time.
Read more 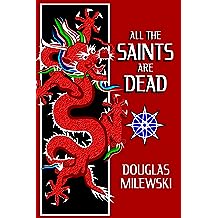 All The Saints Are Dead (Swan Song Book 1) Oct 31, 2014
by Douglas Milewski
( 4 )
$0.00
Astrea rules the sky with the power of dragons. Targa Tik is among their best warriors, risking her life every time she flies.

When there’s a death in the ranks, Targa is promoted to lead the East Winds. With this opportunity, she’s determined to reform the dragonrider project while recruiting competent young women, mentoring them into a new generation of riders. To accomplish this, she must confront a massively corrupt recruitment system, one where bribery, not skill, determines outcomes.

Those in power don’t like being challenged. If Targa is to survive her own initiatives, she’ll need someone to watch her back, and her new recruits may just have more promise than she’d ever expected.
Read more
Other Formats: Paperback 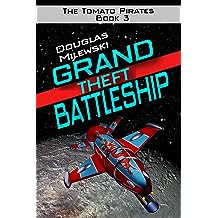 Grand Theft Battleship (The Tomato Pirates Book 3) Feb 1, 2020
by Douglas Milewski
$3.99
This is the showdown.

The fate of the solar system hangs in the balance. Whoever gets the last battleship wins. All the losers get blown to atoms.

The Empress commands the solar system, but to win, she needs the keys.

The Tomato pirates have the keys , but to win, they need Cherryh.

Cherryh doesn’t have a body, but she’s still got plenty of snark. (There’s no keeping Cherryh down.)

As for Windy, she’s stuck eighty years in the past, with no job prospects and no references. Can she blend into society, penetrate the Imperial government, and lay the groundwork for victory?

With donuts, anything is possible.
Read more 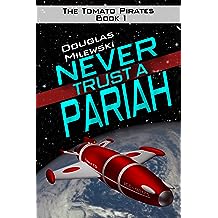 Never Trust a Pariah (The Tomato Pirates Book 1) Feb 1, 2020
by Douglas Milewski
( 2 )
$3.99
A family feud of galactic proportions threatens everyone.

Windy has a chance to stop a galactic war. To prevent the Royalists from reviving the galactic throne, she volunteers to deliver a critical packet containing data that could revive the Empire.

She fails. It’s not even close. Her own school roommate, Cherryh Pariah, betrays her by shoving her into an escape pod with nothing but coffee and donuts. At least the donuts are fresh.

Drifting in deep space, her air running out, Windy must find a way to rescue herself, recover that packet, and strangle her roommate. 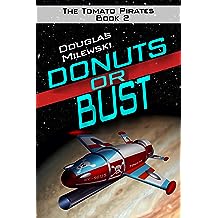 The Tomato pirates have crippled the fashion industry by looting every shipment. The entire population is stuck in last season’s clothes. Public morale is tanking. If the Royalist want to keep in power, they must defeat those pirates.

Translation: he gets bigger guns.

Meanwhile, Windy is stuck in Croquet Online, as the one and only human player in a vast empty game world. Can she escape her strange trap, rejoin her friends, and defeat Sub-Prince Akuma?
Read more 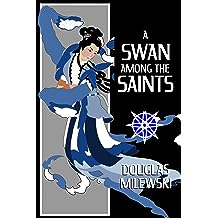 After Targa dies reviving a long dead god, Gedimimas, she finds that she must work off her mortal sins. Dedicating herself to his service, they set off across the universe to restore his power. With them travels her new husband, the dead Phoenix Emperor, who has his own host of sins to work off.

To complicate matters, when she’d been alive, Targa had signed a standardized dragonrider contract, one that had specified on her death, she was obligated to work for the Red Lady, the goddess of lies and deceit.

In fact, all her dragonrider sisters had signed this contract.

Seeing this injustice before her, Targa swears to take on the Red Lady, freeing her sisters from their eternal servitude, even if that takes wreaking chaos across the heavens themselves.
Read more
Other Formats: Paperback 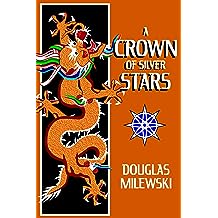 A Crown of Silver Stars (Swan Song Book 3) Nov 28, 2015
by Douglas Milewski
$2.99
Targa thought herself forever blessed with exile, but when her sainted mother summons her back, she dares not disobey. Saint Dominia has ambitions of rule Astrea itself, if not through cunning, through threats and violence. This has been the work of her entire lifetime.

All Targa needs to do is marry the First Minister. Mother has a well negotiated marriage ready to be signed, and it’s a very good contract.

Her other job will be killing whoever Mother orders, because Targa’s sword is The Wind Before the Storm, a blade even capable of killing the deathless saints. It is her arm that will give her Mother’s threats credibility.

In her former life, this task would have been easy, but Targa has reformed, choosing the path of the hero, so backing a bloody dictator is not compatible with her morals. Her two sworn and unbreakable duties lie in opposition, one to the gods and one to her mother.

To end her inner conflict, she must choose her allegiance, knowing that whatever choice she makes, she will leave a path of death and destruction in her wake.
Read more
Other Formats: Paperback 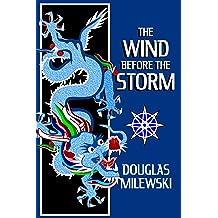 The Wind Before the Storm (Swan Song Book 2) May 16, 2015
by Douglas Milewski
$2.99
Targa was never supposed to be the hero. For her entire life, all she obeyed orders, killed whoever the Saints wanted, then slept without guilt. No mercy. No fear. In exchange for her duty, she’d gotten to live in Astrea, the most beautiful city in the world.

As a reward for putting her life on the line, for taking a wound in her city’s defense, the Saints cast her out like a broken tool, useless to them.

Now healing, she must rebuild her strength. Little does she understand this is a moment of crisis, for inside her lies a power that nobody controls, one terrible enough to bend history itself. Whatever path she chooses, hero or villain, her future will rock the world.
Read more
Other Formats: Paperback 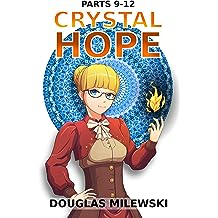 You’ve got to be kidding.

Whose plan was this?

In good news, Lekodias has been defeated.

In bad news, Lekodias is even more dangerous in retreat. If we chase her down, she’s got all the resources of the Oversky at her disposal. Victory now looks impossible with a side of impossible sauce.

But if we do nothing, she’ll regroup and invade us again, this time bringing an even bigger army.

We’ve got to go through with the plan. We don’t know what we’ll find in the Oversky, but we have no choice. If we want to end this war, we have to take the battle to her.
Read more
Other Formats: Paperback 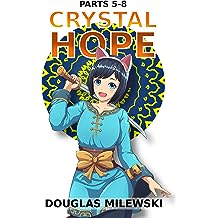 This isn’t looking so good.

Anybody got a plan yet?

Now that the war’s begun, it’s all worse, and we’re losing. It’s androids verses intruders, and our androids are dumb as rocks.

Whose idea was all this? The Prime Caretaker? I think we’ve got to have a word with her.

So, it’s off to Toka City and the last stand of humanity.

We don’t have a chance unless that chance is a giant mech, but who’s got one of those just lying about?
Read more
Other Formats: Paperback 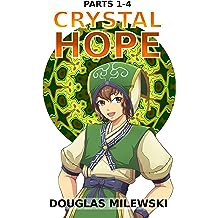 Crystal Hope: Parts 1-4 Sep 2, 2018
by Douglas Milewski
$2.99
Effarna was only supposed to be in charge for a little while. You know the drill, find lost kids and answer questions. How hard could that be?

There wasn’t any mention of “invasion” in the job description.

Nor was there any mention of traveling the world, acquiring new powers, delving into dungeons, fixing the Great Crystals, and battling insane bosses.

Whose idea of fun was this?

To win, all they need is boatload of ambition and a good plan. Fortunately, they’ve already got ambition.

Anybody got a plan?

Crystal Hope brings all the fun of a JRPG to the epic novel experience.
Read more
Other Formats: Paperback 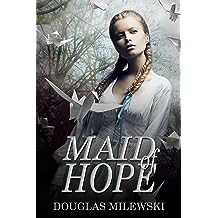 Maid of Hope (Pabi Ae Book 3) Mar 6, 2018
by Douglas Milewski
$2.99
Pabi can memorize anything, but when her memory begins failing, she knows that her doom is upon her. If she doesn’t act, the scholar’s disease will wipe her mind and she will fade away as if she had never existed.

Her only hope is the strange elf Scarab, the last practitioner of forbidden mind arts. If his plan works, she’ll restore herself, integrating herself into this here and this now. If she fails, she may become someone else all together.

The only thing guaranteed is that nothing is guaranteed.
Read more 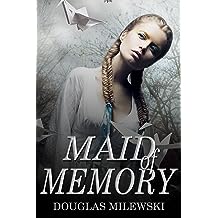 Maid of Memory (Pabi Ae Book 2) Jan 19, 2018
by Douglas Milewski
$2.99
Pabi once worked for the last great hero, Targa, who did great deeds while wielding an amazing sword, but now she’s dead.

Unwittingly, Pabi had been Targa’s final student, so everyone now looked upon her as Targa’s heir.

What are they thinking? She can’t even wield a sword. She wanted any fate but this.

When Pabi meets Scarab, she finds a mind unlike any that she’s ever encountered. He shakes her soul to its very foundations, treading deep into her faulty memories. He challenges her, his thoughts opening new pathways, a new sort of life, but she can only claim this if she dares the consequences.

Will this psychotic save her or destroy her?
Read more