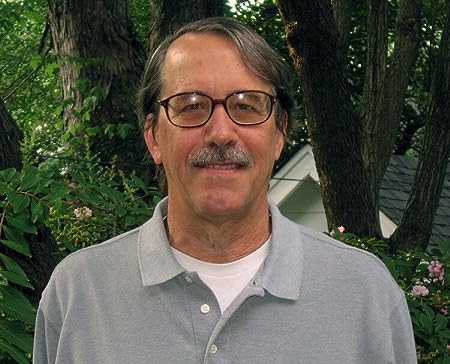 Douglas Barnes is an infrastructure sociologist who with a strong background in economics. He has been involved in rural energy, household energy and international development issues for the last 30 years. First at Resources for the Future and later at the World Bank he worked on issues of energy, environment and equity in many different developing countries, and has continually been involved in the development and implementation of innovative household surveys. His books and papers have changed the way international agencies have developed programs for rural electrification, renewable energy, biomass stoves and household energy. He won several honors at the World Bank and in 2012 received the University of Illinois Alumni Achievement Award. 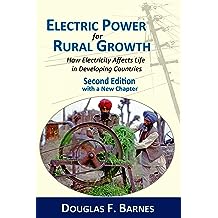 Electric Power for Rural Growth: How Electricity Affects Life in Developing Countries Dec 6, 2014
by Douglas Barnes
( 2 )
$4.99
Most people don't think much about energy. They just flick a switch to light a room or turn on their computers to browse the internet. This is not true for over one billion of the poorest people in the world, who incredibly still do not enjoy the advantages of having electricity. Despite much progress, even today many still question the exact nature of electricity's benefits for the world's poor? Is rural electrification important for education and quality of life? Does it improve rural productivity? Can the poor afford electricity? The new edition of the classic book Electric Power for Rural Growth answers these questions and more.

This Second Edition is entirely rewritten. The book is faithful to the original household surveys from India, Colombia and Indonesia, but has a brand new chapter summarizing current research and tracing the development of benefit evaluation techniques over three decades. With the new international mandate to provide Sustainable Energy for All, Electric Power for Rural growth is perhaps more important today than when it was first published several decades ago.
Read more
Other Formats: Paperback 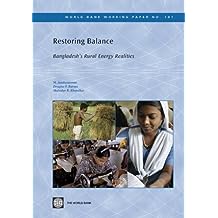 Restoring Balance: Bangladesh's Rural Energy Realities (World Bank Working Papers Book 181) Mar 29, 2010
by Douglas F. Barnes, Shahidur R. Khandker, M. Asaduzzaman
$14.99
Rural energy’s importance to the Bangladesh economy cannot be underestimated, The problems rural people face in obtaining safe, clean, and reliable energy supplies are not minor inconveniences. People are cooking with biomass fuels including large amounts of leaves and grass that expose them harmful indoor air pollution. They light with kerosene or sometimes candles which give off a dim light that hampers studying and reading in the evening. Finally, rural productivity suffers because of lack of access to modern energy. However, the picture also is not all bleak. This study underscores how improved access to rural energy services can created multiple benefits for rural life—from income and labor productivity to education and women’s health. Recommended or enhancement of programs for improved stoves, rural electrification, renewable energy and greater access to commercial liquid fuels can significantly improve both the rural productivity and enhance the quality of life in rural Bangladesh.
Read more
Other Formats: Paperback 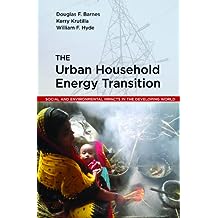 The Urban Household Energy Transition: Social and Environmental Impacts in the Developing World (Resources for the Future S) Sep 30, 2010
by Douglas F. Barnes, Kerry Krutilla, William F. Hyde
( 1 )
$43.67
As cities in developing countries grow and become more prosperous, energy use shifts from fuelwood to fuels like charcoal, kerosene, and coal, and, ultimately, to fuels such as liquid petroleum gas, and electricity. Energy use is not usually considered as a social issue. Yet, as this book demonstrates, the movement away from traditional fuels has a strong socio-economic dimension, as poor people are the last to attain the benefits of using modern energy. The result is that health risks from the continued use of wood fuel fall most heavily on the poor, and indoor pollution from wood stoves has its greatest effect on women and children who cook and spend much more of their time indoors. Barnes, Krutilla, and Hyde provide the first worldwide assessment of the energy transition as it occurs in urban households, drawing upon data collected by the World Bank Energy Sector Management Assistance Programme (ESMAP). From 1984-2000, the program conducted over 25,000 household energy surveys in 45 cities spanning 12 countries and 3 continents. Additionally, GIS mapping software was used to compile a biomass database of vegetation patterns surrounding 34 cities. Using this rich set of geographic, biological, and socioeconomic data, the authors describe problems and policy options associated with each stage in the energy transition. The authors show how the poorest are most vulnerable to changes in energy markets and demonstrate how the collection of biomass fuel contributes to deforestation. Their book serves as an important contribution to development studies, and as a guide for policymakers hoping to encourage sustainable energy markets and an improved quality of life for growing urban populations.
Read more
Other Formats: Hardcover , Paperback 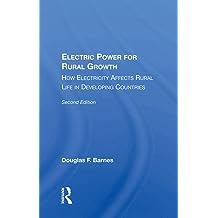 Electric Power For Rural Growth: How Electricity Affects Rural Life In Developing Countries Mar 20, 2019
by Douglas F. Barnes
$47.45
This book offers important historical information on the state of rural electrification in the 1980s. It also summarizes the development of benefit evaluation methods, along with findings from recent research on the impact of rural electrification for development.
Read more
Other Formats: Hardcover , Paperback 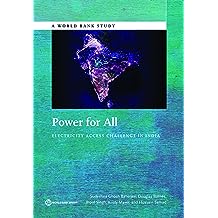 Power for All: Electricity Access Challenge in India (World Bank Studies) Nov 20, 2014
by Sudeshna Ghosh Banerjee, Douglas Barnes, Bipul Singh, Kristy Mayer, Hussain Samad
$19.98
India has been one of the worlds leading developing countries in providing electricity to both rural and urban populations. The countrys rural energy policies and institutions have contributed greatly to reducing the number of people globally who continue to lack access to electricity. By late 2012, the national electricity grid had reached 92 percent of Indias rural villages, about 880 million people. Yet, owing mainly to its large population, India still has by far the worlds largest number of households without electricity. About 311 million people still live without electricity, and they mostly reside in poor rural areas. Among these, 200 million live in villages that already have electricity. Less than half of all households in the poorest income group have electricity. Even among households that have electric service, hundreds of millions lack reliable supply, experiencing power cuts almost daily.
Achieving universal access to electricity by 2030 is not financially prohibitive for India. The challenge of providing electricity for all is achievable, ensuring that India joins such countries as China and Brazil in reaching out to even its remotest populations. The estimated annual investments necessary to reach universal access are in the range of Rs. 108 billion (US$2.4 billion) to Rs. 139 billion (US$3 billion). Considering that the country already spends about Rs. 45 billion ($1 billion) a year on new electricity lines through the current government program, the additional investments needed to achieve universal access by 2030 are quite reasonable. Investments are not the only hurdle to providing electricity to those presently without service. Policies will need to be aligned with the principles followed in other successful international programs.
The potential benefits of electrification for those without service are quite high. The benefits of lighting alone would approximately equal the investments necessary to extend electricity for all. When households that adopt electricity switch from kerosene lamps to electric light bulbs, they experience an enormous price drop for lighting energy and can have more light for a range of household activities, including reading, studying, cooking, and socializing. Households with electricity consume more than 100 times as much light as households with kerosene for about the same amount of money. The potential value of the additional lighting can be as large as 11.5 percent of a typical households monthly budget. If universal access is achieved by 2030, the cumulative benefit for improved lighting alone would equal about Rs. 3.8 trillion (US$69 billion) or Rs. 190 billion ($3.4 billion) in annual benefits. This is greater than the cost of providing electricity service, and does not even include such benefits as improved communications, household comfort, food preservation, and income from productive activities. With electric lighting, households can generate more income, and children can have better educational outcomes and income-earning potential. Without quality energy services, households often face entrenched poverty, poor delivery of social services, and limited opportunities for women and girls.
Read more
Other Formats: Paperback 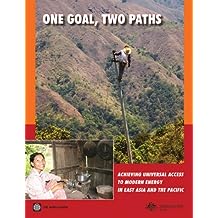 One Goal, Two Paths: Achieving Universal Access to Modern Energy in East Asia and the Pacific Sep 14, 2011
by The World Bank
$14.99
Despite the East Asia and Pacific (EAP) region's impressive economic growth, over 1 billion of its people still lack access to electricity and modern cooking solutions. To achieve universal access to modern energy by 2030, this book exhorts EAP countries to advance simultaneously on two paths: (1) accelerate programs for grid and off-grid electricity through appropriate policies and innovative technologies; and (2) scale up access to clean cooking fuels and efficient cooking stoves, particularly for biomass in poor rural areas.
Read more
Other Formats: Paperback 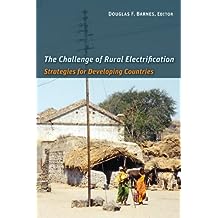 The Challenge of Rural Electrification: Strategies for Developing Countries (Rff Press) Sep 30, 2010
by Douglas F. Barnes
$56.95
Douglas Barnes and his team of development experts provide an essential guide that can help improve the quality of life to the estimated 1.6 billion rural people in the world who are without electricity. The difficulties in bringing electricity to rural areas are formidable: Low population densities result in high capital and operating costs. Consumers are often poor, and their electricity consumption is low. Politicians interfere with the planning and operations of programs, insisting on favored constituents. Yet, as Barnes and his contributors demonstrate, many countries have overcome these obstacles. The Challenge of Rural Electrification provides lessons from successful programs in Bangladesh, Chile, China, Costa Rica, Mexico, the Philippines, Thailand, and Tunisia, as well as Ireland and the United States. These insights are presented in a format that should be accessible to a broad range of policymakers, development professionals, and community advocates. Barnes and his contributors do not provide a single formula for bringing electricity to rural areas. They do not recommend a specific set of institutional arrangements for the participation of public sector companies, cooperatives, and private firms. They argue instead that successful programs follow a flexible, but still well-defined set of principles: a financially viable plan that clearly accounts for any subsidies; a cooperative relationship between electricity providers and local communities; and an operational separation from day-to-day government and politics.
Read more
Other Formats: Hardcover , Paperback