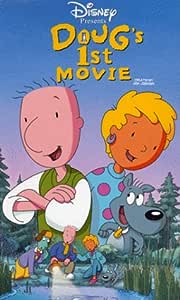 Doug is presented with a classic dilemma: save the town or win the girl. As we see, the dilemma unravels to be much more complex-the town's leadership is not what it seems, the monsters are more than mythical and the right thing to do isn't the most fun.

But our resourceful Doug waves into the sunset having learned that standing for one's principles is much more attractive and rewarding than slick talk and a hip hairdo. A 1999 Parents' Choice® Silver Honor.

Patrick Galvan
3.0 out of 5 stars It's great to finally have this movie in the digital format, but the DVD itself leaves more to be desired
Reviewed in the United States on September 9, 2012
Verified Purchase
I was a committed viewer of the cartoon series "Doug" as a child. Believe it or not, I adored--and still adore--both the Nickelodeon and Disney versions, even though the former is clearly superior to the latter. Not surprisingly, I found a lot to like about the feature-length film "Doug's 1st Movie," which unfortunately was also Doug's last movie. It has taken 12 long years, but finally Disney has made the effort to put this underrated little gem of a movie out on DVD; for a long while, we had to settle with the VHS version. So the good news is that "Doug's 1st Movie" has finally received an official DVD release; the bad news is that it doesn't fare much better than the old VHS tape.

While the movie is good, the DVD leaves a lot to be desired. First of all, we do not get treated to a wide-screen presentation; the DVD's aspect ratio is full-frame, even though it teases us with a wide-screen opening/scene selection menu. At first, I wondered if maybe "Doug's 1st Movie," originally intended to be a straight-to-video release, was animated in the full-screen format. But then I remembered that now seldom-seen disclaimer at the beginning of the VHS version, which stated "the picture has been modified to fit your screen," meaning there was a wide-screen print and it has not been seen since 1999. Nevertheless, the picture quality is very fine; the colors are vibrant just as in the show; the sound is clear and well-balance. And the entire film is present. The only lapse is that, for some reason, the end credits have been sped up, so we only get to hear about 2/3s of that wonderful, touching song "Someone Like Me." That's a shame.

But here is the other big question about the DVD release: what is there for additional content. Well, as much as I would like to report that it is loaded with bonus features, it is utterly devoid of them. There is no theatrical trailer, no commentaries, not even the "DOUGumentary" that was featured at the end of the old VHS tape. What really surprised me--as this would have doubled sales for this DVD since the only ones who would buy this film are those who remembered the show from their childhood--is that there are no episodes of "Disney's Doug" included as special features. We get the movie and that is all.

Admittedly, it is great to have "Doug's 1st Movie" on DVD, and I am glad that Disney put up the money to do it. I was just hoping for a little more from this as far as video presentation and content was concerned. But if you have no itching desire to own this film on DVD (or if you have the VHS tape and a tape-to-digital software), there is no real need to rush to get it.

NMB
2.0 out of 5 stars The OTHER Doug
Reviewed in the United States on March 27, 2009
Verified Purchase
The VHS I bought was nice and cheap. Shipping was decent. It was true to the description that it was never opened and still wrapped, it even still had a sticker coupon on the front for like a dollar off Easy Mac or something that expired in 2001.

The movie itself is not great. It REALLY IS nothing like the old Nickelodeon Doug we all love. It feels empty and the characters are different and there's really no heart.

Doug Carlson
5.0 out of 5 stars Bringing back childhood
Reviewed in the United States on November 28, 2012
Verified Purchase
I grew up on Doug from nick to disney I was a fan. I am still called Doug Funny to this day. And I had been dying to find this movie on dvd and here it is. Its still just as good as I remember it.
Read more
3 people found this helpful
Helpful
Comment Report abuse

X
5.0 out of 5 stars Great Item
Reviewed in the United States on December 23, 2012
Verified Purchase
My sons love this. They recommend this to all other kids to watch. Our whole family likes this. Great Item.
Read more
Helpful
Comment Report abuse
See all reviews