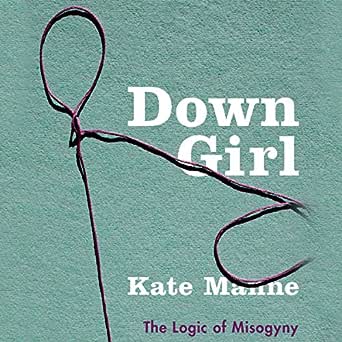 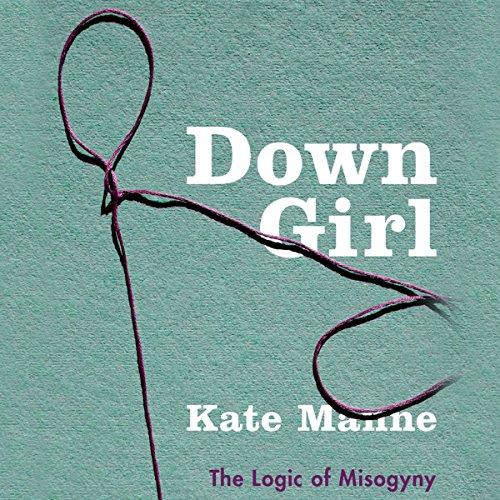 Down Girl: The Logic of Misogyny

4.5 out of 5 stars
4.5 out of 5
323 global ratings
How are ratings calculated?
To calculate the overall star rating and percentage breakdown by star, we don’t use a simple average. Instead, our system considers things like how recent a review is and if the reviewer bought the item on Amazon. It also analyzes reviews to verify trustworthiness.

John
5.0 out of 5 stars Down Girl presents remarkable and well-documented new insights into misogyny
Reviewed in the United States on November 13, 2017
Verified Purchase
I highly recommend this brilliant and honest book. I have been involved in diversity and inclusion efforts for about 20 years, attended innumerable seminars, read a host of works, but as soon as I read the Preface of Down Girl, I knew that it has important new insights into misogyny. The ensuing Chapters present a remarkable combination of diligent research and exceptional clear thinking. No spoilers, but I will tell you that Down Girl offered many fresh takes on behavior that I've read and thought about for years, and time after time I found myself thinking, now why didn't I see that before?

I also was very impressed with the precision and accuracy of this voice. Professor Manne carefully presented not only the contours but also the limits of her analysis. Her writing shows a tremendous respect for the reader.

And if you've ever wondered why the actions of a woman have infuriated you, annoyed you, shocked you, or just seemed wrong, deceitful, cold, or out of place, but you can't put your finger on exactly why...you should read this book.

Alan MillsTop Contributor: Fantasy Books
VINE VOICE
5.0 out of 5 stars Extremely timely and highly readable; a serious analysis of misogyny and its impact on our lives
Reviewed in the United States on December 29, 2017
Verified Purchase
Donald Trump broke into national consciousness during the GOP primaries by making outrageous comments. In August, 2015, he attacked the began the first GOP presidential debate with horrible comments about one of the moderators of the first debates, Megyn Kelly. Toward the end of the campaign, a tape of him bragging about sexually assaulting women was released. Yet he won and has now served as president for a year.
Kate Manne’s book Down Girl, is perfectly timed (despite having been in the works for many years—she swears Trump’s election is not just a marketing ploy to sell more books). Down Girl examines the concept of misogyny—deconstructing some of the common definitions, proposing one of her own, and examining the application of her definition in a variety of contexts, including (among many others) examining the tv show Fargo, Rush Limbaugh’s attack on the Georgetown Law Student who dared to make the case that contraceptives should be covered by health insurance, two high profile crimes, and concluding with an analysis of the role misogyny played in the recent presidential election.
Kate Manne is a professor of philosophy at Cornell, but you should not let that scare you away. While this is real philosophy, it is (almost) jargon free, and highly readable, even for those with zero background in philosophy (full disclosure: my undergrad major was Ethics and Political Philosophy 40 years ago, but am in no sense a philosopher).
To risk over-simplifying Prof. Manne’s thesis, she defines misogyny as a system of customs and actions designed to signal to women that they should “stay in their lane” and not compete for what have traditionally been coded as jobs (which I am using loosely to include all social roles) reserved for men. She rejects the view that misogyny is defined by the motives of the men in question, and instead suggests that the key is examining the impact of the actions and social structures on women—do they have the effect of signaling to women that they are out of line? Do they impose a cost on women not borne by men in similar situations? If so, they are examples of misogyny, regardless of the intent of the actor. Viewed this way, people who perform acts furthering misogyny can love their wives, mothers and girlfriends, without contradiction). Note that this allows women to engage in actions which constitute misogyny as well.
It is important to note the limitations of Prof. Manne’s book. Early on, she explicitly states that she is not qualified to address—and will not examine in any detail—the very important issues of the intersection of race and misogyny, or the special case of how misogyny intersects with the struggle by transwomen for equal rights. That said, in the final chapter, she does discuss race, and its interplay with misogyny, in the context of examining Trump’s victory over Clinton.
But it is the earlier chapters of the book which I found to be the most thought provoking. Prof. Manne rejects the idea that misogyny depends on pretending that women are somehow less human than men—rather, they are viewed as serious competitors for male coded jobs who—precisely because of their full humanity—must be slapped down. I am not sure that I agree. Using John Rawls’ framework of the “veil of ignorance,” you must consider the possibility that you would fill any of the “fully human” slots once the “veil” is removed, and are thus motivated to develop moral rules which would benefit you, regardless of your future position in society. However, you need not consider the impact of your proposed moral rules on those who are viewed as less than “fully human,” as you can be assured that you will not fill one of those slots. It is in this sense, that the ethical rules applicable to non-human animals are generally considered less compelling than those applicable to humans. Applying this formula to misogyny, if you adopt a moral rule which allows misogyny to exist, then you presumably don’t believe that you will be assigned a role as a woman—otherwise, why would you purposely inflict handicaps on yourself? In this sense, I think that racism and misogyny both depend on some level on the assumption by those in power that women (and non-white people) are not fully human.
To be clear, my argument against Manne on this point in no way detracts from my admiration of Professor Manne’s book—it adds to it. I love books that engages me in this sort of thought process. It is why I chose an undergraduate major in philosophy, and it is an exercise I (and I suspect many people) engage in only rarely after we leave college. Reading Down Girl was for me an excellent way to regain that habit.

RWC
5.0 out of 5 stars Good book for many reasons.
Reviewed in the United States on November 1, 2017
Verified Purchase
I heard Kate Manne speak on the Brian Lehrer show on WNYC one evening. I found her points to be compelling, and her interaction with one particular listener to be meaningful and precise. So, I leaped to my kindle and bought this.

I haven't finished the book yet, but I was sharing this book on social media, and I saw it hadn't received a review yet. I wanted to say something positive for the book so that more people would buy it and review it.

The book has the precision of academic writing, but the accessibility of a news magazine like the New Yorker or the Economist (although it falls more on the academic side of things). It discusses the importance of properly defining misogyny, and thinking about patriarchal structures in a way I haven't heard before. Manne is very careful and precise, and her points are really helping me understand myself and how I can benefit people (I am a white straight male).

I haven't finished the book, and I'm enjoying it and benefiting from it. I wish I were more expressive so I could encourage you to read it. I'd say read what you can and go search for that interview if you want to know more before you buy.
Read more
82 people found this helpful
Helpful
Comment Report abuse
See all reviews

QB
5.0 out of 5 stars It's the COSTS not the MOTIVE.
Reviewed in the United Kingdom on September 11, 2018
Verified Purchase
Dr. Manne has written a well-researched, reader-friendly book on misogyny, the content of which should be included as core curriculum in middle schools. Dr. Manne addresses several limitations (who can cover everything in one book?) to her thesis such as misogynoir, equal rights for transwomen, etc., but has more than sufficiently researched and defended her argument regarding misogyny. She examines misogyny as the enduring traditions, customs and actions that signal women to “stay in their lane” and not compete for roles, jobs, titles or the economics traditionally retained by men. Identifying misogyny as the COSTS women bear and not the MOTIVES of the men involved was one of the significant takeaways for me.

Like Prof. Manne, I agree dehumanisation (depriving a person of human qualities, instead attributing animal-like qualities to them) is not the main mechanism of misogyny, but it certainly is one practice that will signal misogyny is at work to keep women in their lane (note the terms men use when discussing women’s sexuality, particularly when women’s choices are seen as ‘outside their lane’).

I originally bought this book as the Audible version but added the paper book to mark vital passages for further reference. You won’t be sorry you purchased this book.
Read more
8 people found this helpful
Report abuse

Ruki
3.0 out of 5 stars Not so new
Reviewed in the United Kingdom on September 14, 2020
Verified Purchase
I’m only into chapter 1 and finding it immensely irritating already. It’s absolutely normal for academics to stake a claim to originality and Manne does this: “this is the first book-length treatment by someone working in the tradition of analytic feminist philosophy.” Seriously? She’s never, apparently, read or heard of Simone de Beauvoir? She cannot seem to see any continuity between de Beauvoir’s pioneering work on the oppression of women and the way their social roles are enforced and justified and her own ‘new’ definition of misogyny. Nor does she appear to recognize that the system of social control that she terms ‘misogyny’ corresponds entirely with what feminists have been describing as ‘gender’ (as a system of social control of women) for decades now. The only thing that’s new here is her scrapping/discounting of years of work by radical feminists in order to redefine terms.
Read more
Report abuse

julie
1.0 out of 5 stars reads like a text book
Reviewed in the United Kingdom on June 23, 2019
Verified Purchase
I found this book impossible to read. as dense as a text book and from what little I read, very badly structured.
Read more
4 people found this helpful
Report abuse

Vonny Moyes
5.0 out of 5 stars A forensic study of misogyny
Reviewed in the United Kingdom on December 9, 2017
Verified Purchase
What can we do in the age of Weinstein and Trump? We can start by learning about the nature of misogyny, so we know what we’re up against.
Read more
5 people found this helpful
Report abuse