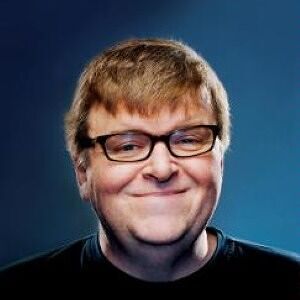 Downsize This! Random Threats from an Unarmed American Paperback – August 12, 1997

by Michael Moore (Author)
3.9 out of 5 stars 90 ratings
See all formats and editions
Sorry, there was a problem loading this page. Try again.

Americans today are working harder, working longer and yet for most of us, in this time of ruthless downsizing and political cronyism, job security, a decent standard of living and a comfortable retirement are becoming harder and harder to find. In this brilliantly funny and right-on-target diatribe, irreverent everyman Michael Moore gives his own bold views on who's behind the fading of the American dream.

Whether issuing Corporate Crook trading cards, organizing a Rodney King Commemorative Riot, sending a donation to Pat Buchanan from the John Wayne Gacy fan club (which was accepted) or trying to commit former right-wing congressman Bob Dornan to a mental hospital, the in-your-face host of TV Nation and director/star of Roger & Me combines an expansive wit with biting social commentary to make you think and laugh at the same time.

In hardcover, Downsize This! stormed the bestseller lists of the New York Times, Wall Street Journal, Washington Post, San Francisco Chronicle and others. Given Michael Moore's enormous -- and growing -- constituency, this trade paperback edition brings his unique perspective on the nation to an even greater audience.

Who says the left wing doesn't have a sense of humor? Maybe it doesn't, but documentarian Michael Moore sure does--Exhibit A was Roger & Me; B was the ill-fated TV Nation; and C is 1997's print skirmish Downsize This! Moore's politics are rabidly liberal, populist, and anti-big business--about what you'd expect from the former editor of Mother Jones. While this restricts his audience to Americans on the left side of the aisle, for them Downsize This! will be a chance to point and laugh hysterically (if ruefully) at the clique of rich white guys who run everything.

Moore is at his best as a prankster, whether it's trying to see if Pat Buchanan will take a campaign donation from the John Wayne Gacy Fan Club (yes) or whether he can have Bob Dornan committed to an insane asylum based on his bizarre behavior (no, but it was close). Moore is one of our sharpest satirists, and Downsize This! makes one wish he would write a "Sorry State of the Union" every year. But only if it doesn't cut into his moviemaking--that's too big a price to pay. --Michael Gerber

Michael Moore's first book, Downsize This!, was a New York Times bestseller in both hardcover and paperback. The award-winning director of the groundbreaking documentary Roger & Me, which became the largest grossing nonfiction film of all time, Moore is the creator and host of the Emmy-winning series TV Nation and The Awful Truth. Also the coauthor (with Kathleen Glynn) of Adventures In A TV Nation, he lives in New York City.

JGC
4.0 out of 5 stars Michael Moore makes sense
Reviewed in the United States 🇺🇸 on November 13, 2004
Verified Purchase
Michael Moore discusses corporate downsizing, American politics, social values, and national economic concerns like no other in his book, "Downsize This." Michael Moore should not simply be dismissed as a crazy liberal because what he says makes sense.

Moore doesn't mince words in this book (fist published in 1996 but still very realistic in 2004), Moore tells Americans how we can take action. Don't just sit there and let the corporate bigwigs fire you only so they can make a big bag of money.

What's the fuss all about? Most of conservative America thinks Moore should shut his big mouth and stop writing books like this because he is a rich white man. But Michael Moore doesn't play by their rules. He has a conscience and he knows right from wrong.

This book won't help you pay your bills or find you a job if you got recently laid off (like myself) but it will help explain the situation and state what YOU can do. Just because we don't play by their rules doesn't mean that we can't make a difference. Remember that & remember that Michael Moore makes sense.
Read more
10 people found this helpful
Helpful
Report abuse

Tony Hall
5.0 out of 5 stars His funniest Book!
Reviewed in the United States 🇺🇸 on October 9, 2003
Verified Purchase
If you're new to Moore (maybe after seeing his Oscar speech or Bowling for Columbine) and you're thinking about reading one of his books then start with this. It's his first and funniest book. Stupid White Men is great, but I didn't bust a gut like I did when I read this one.
Here's my suggestion: read this one whenever and then read Stupid White Men and Dude, Where's my Country back to back. Also, be sure to watch his films for a more moving expirience.
Read more
6 people found this helpful
Helpful
Report abuse

Andre
5.0 out of 5 stars It made Moore a more interesting person to behold.
Reviewed in the United States 🇺🇸 on June 14, 2013
Verified Purchase
There was nothing I didn't like about it. I would compare it to his film, Sicko. People should know that Moore doesn't sugarcoat his views.
Read more
One person found this helpful
Helpful
Report abuse

Lisha
5.0 out of 5 stars Love it
Reviewed in the United States 🇺🇸 on May 9, 2007
Verified Purchase
I just love Michael Moore. Have a few books by him. He is frank, to the point and raises questions. He makes you sit and think and ask questions yourself.
Read more
One person found this helpful
Helpful
Report abuse

Josh Dougherty
5.0 out of 5 stars Doing his part to [upset] the wingnuts
Reviewed in the United States 🇺🇸 on May 5, 2002
This book is hilarious. I particularly like the chapter where he tries to get Bob Dornan commited, a riot. This book is a bit dated by now, but most of it still applies, unfortunately. His writing on corporate welfare and the way our government gives out 'payoffs for layoffs' to rich corporations is on point. Nothing has changed.
Moore sticks it to democrats and republicans in this book, (he opts for the term "republicrats") but his brand of humor and truth really seems to get on conservatives' last nerve. ...which is all the better.
You can see some of their silly reactionary replies here. Like Ryan Setliff from Lynchburg, VA who titles his review "For those who think a Job is a Right." He says: "They hold to a Marxist view that a job and economic security is an inherent right." Well, what's so humorous about this is not only the idea that Ryan would seemingly rather live in a country where the people can't get jobs and are economically insecure, but that it turns out that a job and economic security *ARE* actually basic and fundamental human rights.
Under the leadership of Eleanor Roosevelt, The "Universal Declaration of Human Rights" was adopted by the United Nations in 1948 and ratified by the United States. This document is basically the standard on which basic human rights are measured throughout the world, and it declares what we as individuals, and our governments, shall strive for in the modern world. Let's take a look at Article 23 of the UDHR shall we?:
(1) Everyone has the right to work, to free choice of employment, to just and favourable conditions of work and to protection against unemployment.
(2) Everyone, without any discrimination, has the right to equal pay for equal work.
(3) Everyone who works has the right to just and favourable remuneration ensuring for himself and his family an existence worthy of human dignity, and supplemented, if necessary, by other means of social protection.
(4) Everyone has the right to form and to join trade unions for the protection of his interests.
Well, it seems that "Everyone has the right to work". :-D
Ryan is obviously full of [it]. The right to a job and economic security *ARE* in fact basic human rights, as is the right to organize in unions.
Now, let's look at Article 25...:
(1) Everyone has the right to a standard of living adequate for the health and well-being of himself and of his family, including food, clothing, housing and medical care and necessary social services, and the right to security in the event of unemployment, sickness, disability, widowhood, old age or other lack of livelihood in circumstances beyond his control.
(2) Motherhood and childhood are entitled to special care and assistance. All children, whether born in or out of wedlock, shall enjoy the same social protection.
Man, Ryan's probably boiling while reading this. ...but I bet he'd kill or mame to protect this one:
Article 17:
(1) Everyone has the right to own property alone as well as in association with others.
Yep, those others are all [garbage], but this one is right on. Nobody better touch my stuff!
...I read the book I laughed. I read these spastic sputtering reviews, I laughed again. Do the same!
Josh
Read more
85 people found this helpful
Helpful
Report abuse
See all reviews

Glimmers
3.0 out of 5 stars Downsize This! (Michael Moore)
Reviewed in Japan 🇯🇵 on July 3, 2004
Verified Purchase
Many good points and a few biased ones, typical of Michael Moore, but definitely worth the read, if for nothing else but
as a comparison of opinion.
Read more
Report abuse

rapbrain
5.0 out of 5 stars Better than his latest book.
Reviewed in Japan 🇯🇵 on July 5, 2003
Verified Purchase
I think that this one is much funnier than the latest one(stupid white men.) The reason why I think it that way is because he uses his own ideas about the American politics. His suggestions are truly unique, and very very interesting. I really wanna give it a try someday. He is so famous in a good way, and a bad way, but he will be moving on, no matter what. I'm lokking forward to following his track. Way ta go!!!
Read more
5 people found this helpful
Report abuse
See all reviews