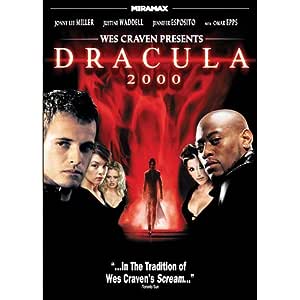 When a team of techno-savvy thieves break into a high-security vault, they dont discover priceless works of artthey find a crypt unopened for 100 years. Suddenly, the ancient terror of Dracula (Butler) is unleashed, and his first destination is America and the exotic city of New Orleansa place where he feels right at home. Not far behind, however, is a vampire hunter (Miller) from London determined to save a young woman with whom Dracula shares his dark legacy!

4.4 out of 5 stars
4.4 out of 5
467 global ratings
How are ratings calculated?
To calculate the overall star rating and percentage breakdown by star, we don’t use a simple average. Instead, our system considers things like how recent a review is and if the reviewer bought the item on Amazon. It also analyzes reviews to verify trustworthiness.
Top reviews

J. Musil
5.0 out of 5 stars There was one made for TV with James Mason which was really good and different
Reviewed in the United States on January 11, 2015
Verified Purchase
I grew up with Christopher Lee's Dracula, then came Frank Langella's Dracula. There was one made for TV with James Mason which was really good and different. There may have been others in between but these were the ones I was interested in. All of them were good and different, then Gerard Butler/Wes Craven's Dracula 2000. Being a Jerry fan I finally had to buy this one and see it. Interesting and surprising take on this classic book. I enjoyed it and will watch it again soon, because there is a lot going on, very visual with Mardi Gras going on in New Orleans as a back drop to the actual story. I lived in New Orleans for 18 months and never got to go down to the French Quarter where this was filmed during Mardi Gras so this is a plus for me personally. Enjoyed the whole movie from beginning to end even the very first part before we see Dracula. Having over the years seen all these interesting movies about Bram Stoker's Dracula, my next task is to actually read the original book. When movies make you want to read the book then they have done a good job!
Read more
2 people found this helpful
Helpful
Comment Report abuse

S. F.
3.0 out of 5 stars Current Blu-Ray version not up to par. Go with the DVD (currently no US Blu-Ray release)
Reviewed in the United States on March 17, 2011
Verified Purchase
I didn't realize that there currently isn't a US Blu-Ray release of this film, and that this version is actually a 2009 Canadian release. The movie itself looks fine, but even though the main reason for buying the Blu-Ray is the movie itself, I think we've come to expect some extras, and this release is a total bare bones release (kind of weird, because you'd think Canadians would want extras, too). The US DVD version has extras, and if I remember correctly, has some sort of commentary track as well. If you want to purchase this movie, for the time being, I'd suggest going with the DVD version (I bought the Blu-Ray to replace my DVD copy that is currently misplaced from a recent move).
If you haven't actually seen the movie, it was released right around the time that it was trendy to have really beautiful people star in horror flicks. So you'll notice that almost all of the cast could be on a runway, modeling. It also offers a different theory to the Dracula mythos that I found interesting. It was a combination of all of that and the fact that the soundtrack was awesome (if you like hard rock/heavy metal) that really made this film entertaining for me (I remember going out and buying the CD right after seeing the movie in theaters).
It's definitely not for everyone, but I did think Gerard Butler made an awesome Dracula, even if he wasn't all 300 ripped back then.

Trekkintheplains
4.0 out of 5 stars 3.5 stars should be the available option
Reviewed in the United States on July 18, 2008
Verified Purchase
I have a mixed opinion on this film. On the one hand, I enjoy the new spin. On the other, some of the scenes and the acting was just hilarious! Was this movie meant to be frightening? It missed the mark. However...

Let me just say that I have become a rather avid fan of Gerard Butler in the last few months. The man is HOT, and he lives up to his looks in this movie as Dracula, WOW! Girls, it is worth watching JUST to see him strutting around in black and to see him with his shirt off and, oh yes, the sex scene. :)

Now to be a more in-depth reviewer. I honestly do like the twist here! I enjoy seeing their take on the origins of vampires, and Van Helsing's (Christopher Plummer) continuing role. Johnny Lee Miller makes a good sidekick too. I also quite liked seeing all the classic Dracula trappings (and I should know them as we studied the novel in depth in my Brit. Lit. 2 class) - bats, wolves, Christian symbols, silver, mist, walking in daylight, regaining his youth as he feeds, etc. - put into play. The history is interesting, the theory is intruiging, and Mary as Van Helsing's daughter and her heritage and therefore connection to Dracula is fascinating!

Substituting the Virgin Corporation for the actual virgins from the original Dracula is just a little bit stupid though. Product placement, eesh.

Still, the original capture of Dracula, his freeing, the resolution, and his origins all make for elements to the movie that make it worth seeing. There's certainly some explanation for why the tools used against Dracula work as they do. Although, I can't remember hearing why he doesn't like garlic, did I miss that bit?

The execution of the storyline is shabby, yes, but there is a little gold amongst the dross. And, if all else fails, if you find Gerard Butler to be amazingly attractive, he'll keep you interested to the end of the movie! :)
Read more
2 people found this helpful
Helpful
Comment Report abuse
See all reviews

Amadeus Eisenberg
3.0 out of 5 stars Sadly a bit too shallow
Reviewed in the United Kingdom on September 12, 2020
Verified Purchase
Just a quick flick that will keep you mildly interested and not much rewatch value. Badass Van Helsing gets taken out of the picture quick and a pair of noobs end up eliminating Dracula and his Brides. Lacks suspense and sense of desperation throughout. There's some good stuff in there, but everything is kind of underwhelming.

Sensational credits roll songs, though. As was the norm for many movies of this era. Helps a metalhead discover new music. Just wish they would have used the music in the movie more. Not quite immersed enough in the atmosphere.
Read more
Report abuse

KitKatBarStory
3.0 out of 5 stars May contain spoilers: Not the worst vampire flick
Reviewed in the United Kingdom on April 22, 2017
Verified Purchase
The acting is teenage and the obligatory Catholic imagery and symbolism are transparent and not very imaginative. The turn-of-the-millenium angle makes this instantly dated, as does the relentless product placement. The cast is packed with stars, but all the characters are flat as Kansas, no offense, and the story ultimately goes nowhere. And yet, this movie takes itself way too seriously. The twist ending was great, but ultimately isn't enough to redeem this movie, especially as the only character of the bunch who could have carried this storyline is killed off too early to make a difference. Dracula 2001 is delicious eye candy, but not first pick if you're looking, no pun intended, for something with substance, because you won't find it here.
Read more
One person found this helpful
Report abuse

Izzy
4.0 out of 5 stars Not the best Dracula movie but surely the sexiests
Reviewed in the United Kingdom on May 29, 2013
Verified Purchase
Comes not as a surprise considering that the Gerard Butler is taking the role of the now famous Vampire. Too bad that his talent is a bit wasted in a poor script and not so good other actors (except perhaps Christopher Plummer who with Butler it's the only one that offers a decent acting in this movie), I found it at times way too cheesy and too acted. Never the less it is worth watching because the level of sexiness hosed by Butler and because the very interesting take is given to this story which probably makes more sense than many explanations given before to why Dracula turned into a vampire.
Read more
2 people found this helpful
Report abuse

caroline brown
4.0 out of 5 stars Entertaining
Reviewed in the United Kingdom on September 12, 2020
Verified Purchase
Gets a fair bit of stick, or stake if you like, but it’s watchable. It’s a bit hammy, but it has enough to get your teeth into.
Read more
Report abuse

Malcolm McDonald
4.0 out of 5 stars Van Helsing V Dracula "again!!".
Reviewed in the United Kingdom on June 16, 2015
Verified Purchase
Great Dracula story bringing the myth up to date with Christopher Plummer brilliant as Van Helsing.....lots of vampires and scares to be had here.Alittle like Dracula AD 1972,but updated.Johnny Lee Miller is great as the vampire hunters assitant and an Early role for Gerard Butler as Dracula.good special effects too.
Read more
2 people found this helpful
Report abuse
See all reviews