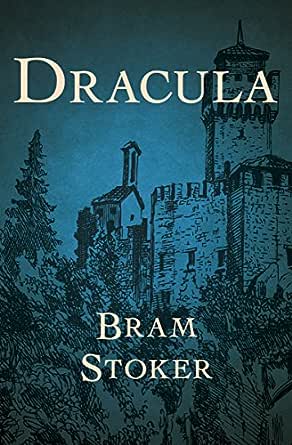 Abraham "Bram" Stoker (8 November 1847 20 April 1912) was an Irish author, best known today for his 1897 Gothic novel Dracula. During his lifetime, he was better known as the personal assistant of actor Sir Henry Irving and business manager of the Lyceum Theatre in London, which Irving owned. --This text refers to the paperback edition.

4.5 out of 5 stars
4.5 out of 5
120 customer ratings
How does Amazon calculate star ratings?
Amazon calculates a product’s star ratings based on a machine learned model instead of a raw data average. The model takes into account factors including the age of a rating, whether the ratings are from verified purchasers, and factors that establish reviewer trustworthiness.
Top reviews

RayGun
5.0 out of 5 stars Scary and Wonderful
Reviewed in the United States on October 2, 2017
Verified Purchase
You know that scene in a horror movie when it gets dark and ominous music begins to play and you know that at any moment the killer is going to suddenly appear and murder everyone in a horrible fashion. That intense build up, and the anxiety of wondering exactly when you’re going to be scared, because you already know it’s coming. That’s this entire book. I had to take breaks at times to read some short stories that were a bit lighter, because the unnerving fear for the characters, as we the reader know what’s happening, could be a bit much at times. However, it’s easy to see why this is a classic, and how it has inspired others to delve into the dark world of vampires. Though, considering I’ve mainly read paranormal romance, it’s a bit disconcerting to see how the original was so completely evil. The vampires in this are soulless, not misunderstood, and kill children and anyone that gets in their way without remorse. More so, it’s incredible all the powers they are given, not just immortality and strength, but real mystical sort of powers, that I wish hadn’t been pushed off to the side in the other stories I’ve read. Beyond all of that though, I don’t believe I have ever come across a story written in this style, and it was this style that really made the tale such an intriguing one. Sure there have been plenty who have done rotating first person, but this is told in pieces of people’s diaries, the letters they’ve written to others, and even newspaper clippings. You’re getting the events after the characters have experience them and have pondered over them, as they try to understand what exactly is going on. Because of this you get to see how it all slowly melds together, and what each character really is thinking, and a much more personal aspect of the story that allows you to really feel for each of them as if these were actual historical letters that someone has stitched together. And I do so hope people were ever like this, this goodness and bravery and the way in which they talk so passionately about everything. It’s really a wonderful book. Though I would advise getting a version that has footnotes to explain certain things. Such as words that are no longer used in this way. As well as some of things that are referenced. I’m sure you could easily enjoy this book without such, but it was rather nice to have.
Read more
64 people found this helpful
Helpful
Comment Report abuse

Amazon Customer
5.0 out of 5 stars Great read
Reviewed in the United States on October 22, 2018
Verified Purchase
I'm so glad to have read this novel. It is so beautifully written and an exiting tale. No movie can do justice to this great novel. Loved the characters and the excitement. It is a wonderful journey. No wonder this classic ranks among the greatest horror stories. Recommended
Read more
One person found this helpful
Helpful
Comment Report abuse

Amazon Customer
4.0 out of 5 stars Interesting
Reviewed in the United States on November 21, 2019
Verified Purchase
I would have preferred that Morris not die. I enjoyed the idea of journals, letters, and newspaper articles to tell the story.
Read more
One person found this helpful
Helpful
Comment Report abuse

Kindle Customer
3.0 out of 5 stars Allright
Reviewed in the United States on June 6, 2020
Verified Purchase
I saw the movie as a kid probably 56 years ago and thought it scary. The story is not scary. Most of it is boring. If they took out all the boring stuff or would be better.
Read more
Helpful
Comment Report abuse

IDLF
2.0 out of 5 stars Get out your microscope
Reviewed in the United States on August 12, 2020
Verified Purchase
Miniscule tiny print edition. Easier to read ingredients listed on your shampoo bottle than to read this book. Migraine inducing.
Read more
Helpful
Comment Report abuse

Shelby Clark
5.0 out of 5 stars Great art, great read, great narration, great price!
Reviewed in the United States on March 11, 2019
Verified Purchase
Great! I've read Dracula before (in high school), and I wanted to re read it. The Whispersync narration makes it great for driving to and from school (college), and I'm able to pick up where I left off. I bought this copy for ¢0.60, and the audible edition was only an additional ¢0.99. Great price, great work, great narration, great art!
Read more
One person found this helpful
Helpful
Comment Report abuse