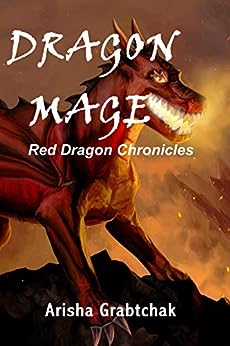 by Arisha Grabtchak (Author) Format: Kindle Edition
Part of: Red Dragon Chronicles (2 books)
See all formats and editions
Sorry, there was a problem loading this page. Try again.
Eiryanne, an orphan, is on the run after her village is brutally attacked and destroyed by the evil Emperor's soldiers. Little does Eiryanne know that her chance encounter with a strange man would change her life forever and reveal her true destiny. The man, a shapeshifter, is Danzellius Daggoras, the Red Dragon, The Lord of Fire, an ancient warrior and mage. Eiryanne learns she is a descendant of a long line of human mages and her only possession—The Necklace of Tairung—was left to her by her parents for safekeeping against its malevolent creator, the corrupt black unicorn, Tairung. Together, Eiryanne and Danzi must navigate their way to Boyerin Cavern where the necklace can be destroyed, and its evil creator silenced forever. As they set out, Eiryanne is uneasy about her alliance with Danzi and is frightened by his violence and ease at which he kills. She knows she has no choice, her destiny is in his hands, but to what end?
Read more
Previous page
Next page

Alicia Rowe
4.0 out of 5 stars Series that held a lot of potential. I hope it was achieved.
Reviewed in the United States 🇺🇸 on December 11, 2021
Eiryenne had lost everyone she had ever been close to. Her parents had died in a fire when she was a baby and her aunt when she was 8. Now, all she has is a bracelet and a necklace to remind herself of them. Too bad these things don't keep her warm or fed. Her fear of fire also doesn't help. But, when demons descend from the sky she is forced to flee. Soon the young woman finds herself in the battle for her life as she learns there is so much more beyond her sleepy little town. With Dragons, Mages, and all sorts of other magical beasts there is only one thing that is certain: the evil she possesses is calling to others and her life means nothing. How ever will this girl who has never been good at anything survive?
I was requested to read and review this book over a year ago and just now got the chance to do so. Having Covid and the Flu at the same time gives you a bit more time for small tasks that don't require a lot of movement, like reading. When I began this book I have to admit I was a bit skeptical. I haven't read a book that is recent where the author is dead. Classics, sure, but not new books. With this book having been released in 2020 that still counts as new to me.

Since I agreed to read this book so long ago I didn't remember the synopsis, or even if I ever read the synopsis. Wouldn't be the first time. That being said this book would make a great starting point for an epic fantasy that I doubt we will ever see the completion of. That is, unless the author finished the other books in this series before her death. There are some typos and grammar issues in the book, but all things considered it isn't bad. I can understand wanting to keep things as they were, given the circumstances.

Now, enough about the author and on to the book. Eiryenne is...annoying. She flip flops back and forth. Doesn't see the most obvious connections. Doesn't try things on her own without it basically being shoved down her throat. I don't have a lot of positives to say about her as a character. My favorite character in the book was Danzi. He was a self-serving jerk, but I didn't have a lot of long-term characters to choose from. Besides, anyone who has read my reviews for any amount of time knows I have a soft spot for two things. Dragons and Redheads. Danzi is a blonde, but that is of little matter.

There is plenty of action in this book. In fact in almost every chapter there is a fight, so if you are in it for the battles you won't have to wait long. There are mystical and magical creatures that we are familiar with and others that have been tweaked a bit by the author. A few creatures I was not sure what they were, and to be honest, I didn't take the time to google them so will remain a mystery. The story was easy to follow along with and nothing in it was confusing or out of place in this type of book.

This book has all sorts of magical creatures, epic battles, and efforts to keep a great evil from a corrupt ruler. All things that have the potential for greatness. I am not sure if this greatness was ever achieved, but this book is a good starting point.
Read more
Helpful
Report abuse

Eva Lazar
4.0 out of 5 stars A thoroughly enjoyable read.
Reviewed in the United States 🇺🇸 on May 1, 2020
This is such an enjoyable fantasy book! You can just feel how the author pulled the story from the depths of her imagination. There are many classic elements to be enjoyed - some a little too classic for my taste, as there are strong similarities to Lord of the Rings - while there are enough twists to keep the book fresh and interesting. I am glad I had the privilege to read this novel.
Read more
One person found this helpful
Helpful
Report abuse

Audreynb
5.0 out of 5 stars Amazing
Reviewed in the United States 🇺🇸 on September 9, 2020
I am so sorry that the world lost such a talented author. She made me feel like I was involved in the story. The realistic images of the battles and flying with a dragon were incredible. I must read the other books.
Read more
One person found this helpful
Helpful
Report abuse
See all reviews

Andre B.
5.0 out of 5 stars Imaginative and fun read
Reviewed in Canada 🇨🇦 on October 13, 2020
Verified Purchase
I enjoyed this book and found it to be an enjoyable mix of existing elements of fantasy lore and novel elements. I’m very glad this book was published and it felt like a book that the author put a lot of their love into.
Read more
Report abuse
See all reviews
Report an issue
Does this item contain inappropriate content?
Report
Do you believe that this item violates a copyright?
Report
Does this item contain quality or formatting issues?
Report