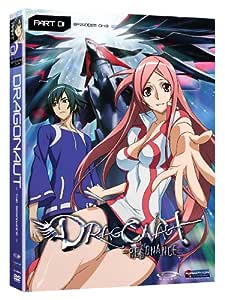 With a deadly asteroid hurtling towards Earth, sexy human Dragonauts in tight uniforms and their curvaceous dragon companions come together to create a formidable fighting force with all the right moves. Caught in the middle of this race against time are Jin - a heartbroken young flyboy, and Toa - a voluptuous mystery woman with an amazing set of intergalactic battle skills. Jin's down about the fate of his doomed planet, but Toa is quick to grab him by the seat of his pants and lift his sagging spirits. If these star-crossed space cadets can unlock the secrets of their mysterious connection and convince the Dragonauts to join the action, there may yet be hope for planet Earth!

The fantasy-adventure Dragonaut: The Resonance (2007) takes place in the not-too-distant future when the asteroid Thanatos (the personification of death in Greek mythology) has destroyed Pluto and assumed its orbit. Thanatos produced the Dragons, humanoids who can transform into powerful mecha; a human who links with a Dragon through "resonance" becomes its pilot and partner: a Dragonaut. Jin, the sullen, morose hero, bonds with Toa, a Dragon who rescues him from a pair of marauding monsters. Two sinister forces, the ISDA and the Girouard Army, want to capture Toa, so a protracted series of improbable chases and escapes ensues. Dragonaut suffers from too many underdeveloped characters and subplots, many of them borrowed from Evangelion and other mecha adventures. The character relationships have weird overtones: Jin's best friend, Kazumi, becomes consumed with irrational jealousy when Jin bonds with Gio, a Dragon whose human form might have walked off the cover of a paperback romance. The grotesquely overendowed female characters were designed by Makoto Uno (Witchblade); the mecha Dragons look a bit too much like Dialga and other angular Pokémon. Although most of the budget obviously went to the CG Dragon fights, Manabu Ono's direction is so flatfooted, they aren't very exciting. Dragonaut: The Resonance may well rank as the worst series the highly respected Gonzo studio has produced. (Rated TV 14: violence, violence against women, nudity, tobacco and alcohol use) --Charles Solomon

(1. Resonance: Hand in Hand, 2. Rendezvous: The World Starts Moving, 3. Awakening: Wings Gathered, 4. Flight: To the End of the Blue Sky, 5. Mingle: The Rain Starts Falling, 6. Reunion: Feelings of Attraction, 7. Recollections: Hearts Reflected on the Water, 8. Parting: An Echo Out of Thin Air, 9. Determination: Overcoming the Gale, 10. Truth: A Shattered Mirror, 11. Rumblings: In Search of the Truth, 12. Fierce Attack: The Scorching Messenger, 13. Visitation: A Guidepost Shown)