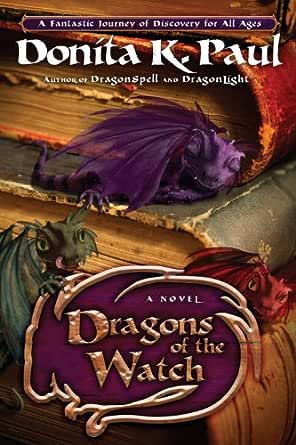 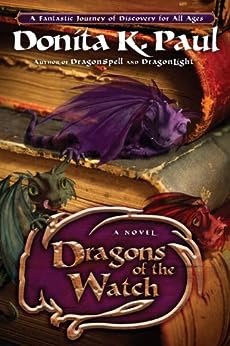 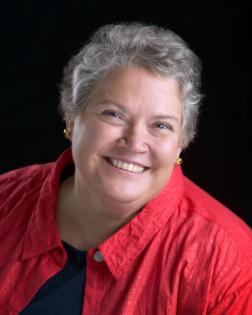 “The writing is crisp and the setting imaginative. This series will speak to all ages of Christian readers.”
—Publisher’s Weekly

“Donita K. Paul never fails to satisfy the imagination and delight the soul.… This is fantasy that truly illuminates reality.”
—JIM DENNEY, author of the Timebenders Series

“I wouldn’t expect anything less from Donita K. Paul, as she always gives us a delightful read: intriguing, challenging, and full of blessing.”
—KATHRYNMACKEL, author of Vanished

“Donita K. Paul possesses a unique talent for instilling deep wisdom and spiritual truth in a story that is engrossing and satisfying.… She is one of my favorite authors.”
—HANNAH ALEXANDER, author of Silent Pledge

“Shut your eyes, hold your breath, and plunge into the unshackled imagination of Donita K. Paul.”
—LINDA WICHMAN, author of Legend of the Emerald Rose
--This text refers to an out of print or unavailable edition of this title.

Ellie sat on her favorite boulder and looked Tak right in the eyes, telling him what was on her mind. “Gramps shouldn’t have taught me to read.”
Tak responded as he usually did when he received Ellie’s confidences. He lowered his head, placing it on her knee for a rub.
Ellie obliged her pet, stroking the white hair between his nubby horns with one hand while digging in the pocket of her homespun pinafore with the other. The mountain breeze toyed with the paper she withdrew. With difficulty, she smoothed the small poster out on her other knee. Dirty and wrinkled, it still made her heart beat a little faster.

All invited to the celebration

Donita K. Paul is the author of The Dragons of Chiril, Dragons of the Valley, and the bestselling DragonKeeper Chronicles with more than a quarter of a million books in print. She enjoys cooking, beading, stamping, knitting, and her grandsons. Not necessarily in that order. Visit her website at DonitaKPaul.com.

S. Theis
5.0 out of 5 stars Depth and beauty
Reviewed in the United States on October 18, 2011
Verified Purchase
This is probably the first time in a long time (if not the first time ever) that I waited with great anticipation for the release of a novel. ::grin:: The publisher made a "sneak peak" available on their website, which included the first two chapters of the novel. The kids and I all read it, and waited ever-so-patiently.

Dragons of the Watch arrived on my doorstep late Saturday afternoon. I casually opened the package and laid the book on the counter. My 10-year-old was standing nearby. My husband said to him, "Hey CJ, look at that." He walked over, his mouth dropped open, then he quickly snatched the book and turned to run. Before he could get to a comfy spot on the couch I called out, "Nope, I get to read it FIRST." I was officially declared "the meanest mom in the world." No worries, though, I didn't hog the book. By midnight Sunday I was reading the last page. Now, how do I write a glowing review without spoilers?

I have to be brutally honest. When I read the preview chapters, I wasn't sure I was going to like the rest. It seemed so strange. Why didn't Ellie find her circumstances strange? Why didn't she complain? Why did her aunt and uncle just drive off and leave her and expect her to be ok? I wasn't so sure I was liking the way this book was starting off! I shouldn't have worried. First of all, Ellie was quite able to care for herself and I was being too much of a "mother hen". Secondly, her personality and ability to handle her unusual circumstances is explained eventually. I was able to identify my own anxieties while reading the book. I mean, don't we normally expect a book to have a "happy" ending? For everything to work out in the end? Even though I reminded myself of this, I was caught up in the story and found myself feeling a genuine concern and worry for Ellie, Bealomondore, and the other characters. I fell in love with the book, and especially with Ellie. She just might be my favorite character yet out of Mrs. Paul's books that I've read. I may not have her patience nor her purity of character, but there are so many other character traits that I identify with.

Following in the footsteps of its predecessors, Dragons of the Watch does an excellent job of introducing the characters (and therefore the reader) to their Creator (Wulder is an allegorical reference to Yahweh God). Like a rose blooming, the story unfolds to reveal depth and beauty in the hearts of the main characters. Attributes of Wulder mirror our God's, and principles from the Tomes are borrowed from our Bible so that we learn--as if by a parable--how we should order our own lives. Reading from this point of view causes me to feel refreshed, excited, and filled with hope. When I pull myself from the fantasy, close the book and examine my reality, it's like looking at my world with new eyes. I can't wait to hear what the rest of my family thinks.

Dragons of the Watch is a bit different than the other novels. A little more romance, a little less action. The characters are well-developed. The setting is beautifully described. The main story is very, very good. It isn't just "brain candy", a term a friend of mine just introduced me to). If you haven't read any from this series yet, I recommend buying all three!

Sarah Sanford
5.0 out of 5 stars Delightful!
Reviewed in the United States on April 9, 2012
Verified Purchase
Typically I like books that have "dragon" in the title somewhere, or a picture of a dragon on the cover, or a combination of the two. And I typically like anything written by Donita K. Paul. With Dragons of the Watch, I wasn't disappointed in the slightest. It is a lively story with some familiar faces (if you've read her previous books) and some new faces, all of whom are endearing and fun to be around. Well, ok, you're just reading about them, not actually spending time in their physical presence, but she writes her characters so well that you feel like you're in their physical presence. As is always the case when I finish a Donita K. Paul book, I wish minor dragons were real and I had a few flittering about my house. Living in a bottle with a couple of teeny people, a whole bunch of giant children, and several smallish dragons should not be so much fun! (Yes, I said living in a bottle. Read the book to figure it out - you won't regret it.) I was sad when I reached the end of the book and anxiously await more books from Mrs. Paul!
Read more
2 people found this helpful
Helpful
Comment Report abuse

Ali
5.0 out of 5 stars Love these
Reviewed in the United States on July 9, 2016
Verified Purchase
Donita K Paul's stories have held a place in my heart ever since I read DragonSpell as a child. I recently purchased the entire series, along with this spin-off series, and I loved every one of them. She is an amazing writer, and her tales of faith and fantasy will stick with you forever. Amazing for fantasy book lovers of any age.
Read more
One person found this helpful
Helpful
Comment Report abuse

Kindle Customer
4.0 out of 5 stars A Good Read for Young Readers
Reviewed in the United States on December 26, 2012
Verified Purchase
These Novels by Donita K Paul are billed as Christian Novels. Be that as it may, there isn't alot about Christians or meaning behind Christians. Yes, there is a Character I believe is God but it just refers to how a person should act. Not not taking away from these novels it's just I expected alot more when it is billed as Christian Novels. These books are for the young readers and would be good for maybe 12 yr olds. I didn't find anything that a young person couldn't or shouldn't read. It is a good read but not if you are using them to bring God and Jesus to the forefront.
Read more
Helpful
Comment Report abuse

M. Bremer
5.0 out of 5 stars This is just one of her many wonderful books.
Reviewed in the United States on May 10, 2013
Verified Purchase
I read these books out loud to my 4 kids ages 3-10. They all loved it and I really enjoyed reading them too. It was hard to stop reading but it was always read at bedtime so I had to control myself to let the kids sleep. The 3-year-old didn't always pay attention but every once in a while she would ask a question that showed she was actually listening sometimes. Donita K Paul is one of our favorite authors. Some aspects of her writing remind me of C.S. Lewis.
Read more
One person found this helpful
Helpful
Comment Report abuse

azg3
5.0 out of 5 stars I very good book.
Reviewed in the United States on December 18, 2013
Verified Purchase
Donita K. Paul quickly became one of my favorite authors. I really liked this book I have re-read it many times and enjoy the series. I haven't meet a Donita K. Paul book I didn't like. I appreciate her style and that they are entertaining and not vulgar.
Read more
One person found this helpful
Helpful
Comment Report abuse

Landon
5.0 out of 5 stars Best book in the series
Reviewed in the United States on October 6, 2011
Verified Purchase
Was a very quick read. I have been waiting for this book to come out for awhile and I was not disappointed. The characters are believable and very easy to fall in love with. The onlynthing I wish is that the last two chapters were longer to expand and provide more detail. Seems that something was taken out, but overall 5 stars.
Read more
One person found this helpful
Helpful
Comment Report abuse
See all reviews