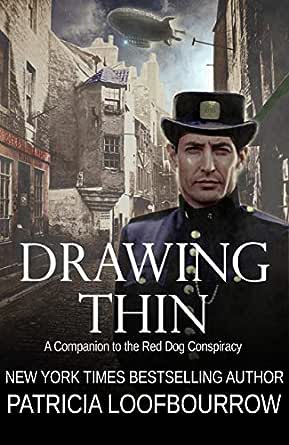 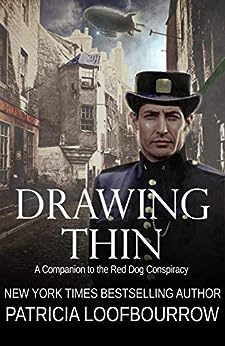 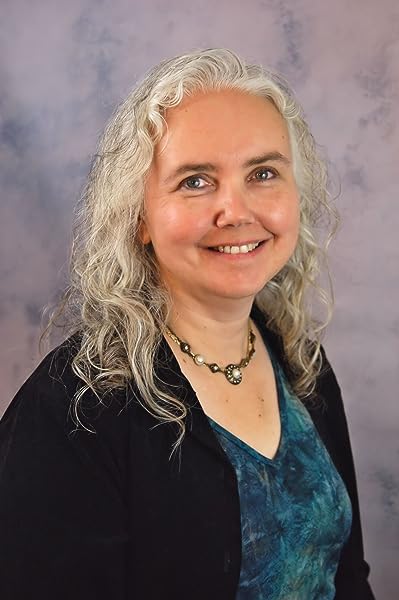 Melissa Williams
5.0 out of 5 stars Nice Companion Novella to The Red Dog Conspiracy
Reviewed in the United States on March 2, 2019
Verified Purchase
Drawing Thin is a companion novel in Patricia Loofbourrow's The Red Dog Conspiracy series and takes place at the same time as Book 1 of the series, Jacq of Spades. Although it started slow and I prefer reading from Loofbourrow's character Jacqui's point-of-view, this work has some awesome characters. Paix Hangar is a constable that tries his best to stay on the straight and narrow in a world that is completely controlled by crime families. Corrupt cops are the norm. Hanger is determined to prove he can solve the mystery of a missing boy, but at what cost?

Hangar and Reina were my favorite characters in this piece. Their relationship is complicated, but endearing. I also really loved seeing another side to the events of Book 1, getting more clues about its mysteries, as well as learning more about the beliefs of the Bridgers. And although I did mention it started slow (which, to be fair, might have been me trying to get a good picture in my head of the various precincts in Spadros quadrant), it definitely picks up and draws you in.

I would definitely recommend this to anyone who has read any books in The Red Dog Conspiracy. But it can technically be read before starting the series. Anyone who likes mysteries involving uncorrupt cops in a corrupt society might also enjoy this story.
Read more
One person found this helpful
Helpful
Report abuse

Clabe
4.0 out of 5 stars Mass Murder in Bridges! The Red Dog Gang at work!
Reviewed in the United States on July 13, 2019
Young David Bryce has disappeared without a trace.

Constable Paix Hanger and his partner, probationary constable, Leone Briscola catch the investigation because their beat is the low numbered streets nearest the Pot. Mrs. Bryce, David’s mother recently fled Dickens after the death of her husband with David and her other son, Herbert one step ahead of a ruthless bill collector, Kiga. (Vulnerable by Patricia Loofbourrow).

Hanger refuses to give up on solving David’s disappearance. Running afoul of fellow police officers and the Spadros crime family alike, Hanger learns he has friends, as well as enemies, in places he never imagined. And while the investigation takes him to lengths he also never imagined, the body count grows and Hanger seems no closer to finding the killer.

A good yarn, and one that is a perfect companion to Ms. Loofbourrow’s Jacq of Spades, I was simultaneously sympathetic with Mrs. Bryce and frustrated with her lack of honesty while still understanding the lack of trust she felt for anyone. She is a victim, but in what respect? And who is killing young men? To cover something up? If so, what is the killer trying to hide? Is the Spadros family behind this? Do they have a rogue associate? Or is the killer someone else entirely? And what does the red dog sign have to do with the crime?

You should read it and decide for yourself, and have a great time doing it! I wanted to cheer for Hanger, roll my eyes at Kanhu, feel sorry for Green, scream Scheinwold and cringe each time another strangling victim appeared. A good read!
Read more
One person found this helpful
Helpful
Report abuse

JeffDH
4.0 out of 5 stars Mixed opinions on this one
Reviewed in the United States on June 6, 2019
The story itself was interesting, written in a linear narrative style, with one main protagonist whose characterization I found interesting and a host of secondary and tertiary characters. There is little world-building or definition of the social, technological, and historical context for the story which made it harder to understand the greater framework within which the characters acted, which perhaps was the frustrating part of the book. And overall, the story line started and finished in a somewhat open ended way, complete as far as it went but lacking in overall context. I suspect I would appreciate this book more if read in context with other books in the series.

I read this as part of the Death and Damages box set.
Read more
2 people found this helpful
Helpful
Report abuse

Tess
5.0 out of 5 stars Excellent Steampunk Noir
Reviewed in the United States on February 28, 2019
Drawing Thin by Patricia Loofbourrow takes place during the events of the Red Dog Conspiracy series by the same author.

The story reads as a wonderful steampunk rendition of film noir detective adventures. Smoky gritty characters with faults and issues in their lives, trying to survive. The police work in the story is historically accurate for the setting even though it is a work of fiction set in a scicence fiction world. I am a retired police officer, former private eye and a criminal justice instructor. This story had me gripping and turning pages until it was done. Her books are excellent, well researched and her characters and setting are very rich in realism inside a sci-fi setting. Highly recommend this writer!
Read more
One person found this helpful
Helpful
Report abuse
See all reviews
Back to top
Get to Know Us
Make Money with Us
Amazon Payment Products
Let Us Help You
EnglishChoose a language for shopping. United StatesChoose a country/region for shopping.
© 1996-2021, Amazon.com, Inc. or its affiliates