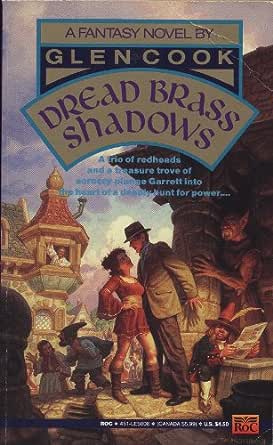 You've subscribed to Garrett, P.I.! We will preorder your items within 24 hours of when they become available. When new books are released, we'll charge your default payment method for the lowest price available during the pre-order period.
Update your device or payment method, cancel individual pre-orders or your subscription at
Your Memberships & Subscriptions 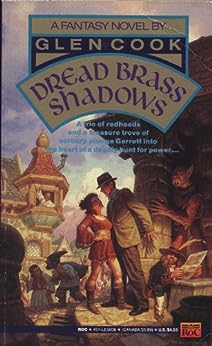 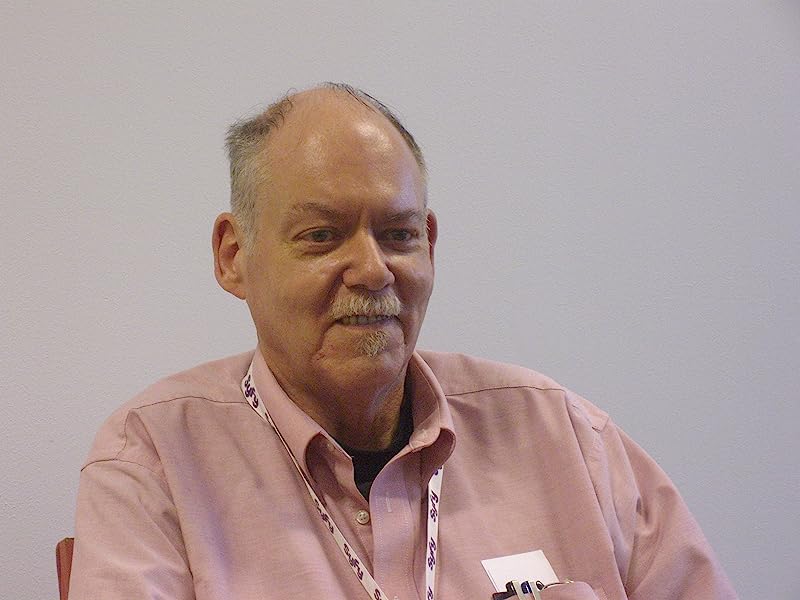 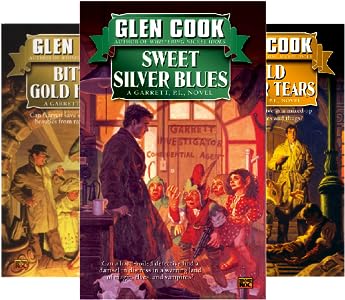 Sneaky Burrito
TOP 1000 REVIEWER
4.0 out of 5 stars another solid book in a favorite series
Reviewed in the United States on November 17, 2014
Verified Purchase
I've read so many of the Garrett, PI books lately, that it's a little hard to keep track of them! This was #5 in the series, though, and I was pleasantly surprised by several aspects of the book.

First of all, I had some expectations going into this book, based on my previous experience with the series. Pretty much all of the previous books have a couple of common elements: Morley Dotes and Saucerhead Tharpe helping Garrett out, Garrett using a couple of little tricks (obtained from either a witch or a priest with magical abilities) to get out of jams, etc. I really expected more of the same here, and instead, Glen Cook mixed things up a bit. So that was great. (Sometimes the little "tricks" made Garrett's job too easy, especially when we weren't told in advance what they were capable of.) And I liked how Garrett went through a series of emotions as Morley and Saucerhead were absent for a rather long period of time. First he was annoyed, and then it escalated into worry, there was rationalization, etc. I was never sure exactly where Garrett's usual backups (i.e., Morley and Saucerhead) were, so ALL of Garrett's speculations seemed reasonable to me. I was happy to be kept guessing. And I was happy with the end result (which I won't spoil here, but it was totally in character).

Setting, characterization, and writing style were all about average for the series. Once again, the story takes place in TunFaire, which is your basic pseudo-medieval European/Renaissance type of city (standard fantasy setting, in other words), where humans live alongside non-humans (elves, dwarves, ogres, trolls, and some of Glen Cook's own invention) as well as "breeds," which are mixes of two or more types of sentient being. There's humor in this book, mostly in one-liners (Garrett's attempts at humor sometimes aren't appreciated by those he's speaking to, however). The prose is terse and does not contain excessive description, which appreciate. (Probably one reason why Glen Cook is one of my favorite authors -- we don't hear the details of every feast or every woman's dress or hairstyle, which is stuff I tend not to care about, anyway.) The pace is quick, as always.

I will note that Garrett spends more time than usual commenting on the physical characteristics of women in this book. It's fairly sexist, in all honesty, but hardboiled detective fiction often is (and now you're forewarned).

Garrett is our POV character in this book, as he is in the previous volumes. He doesn't change a lot over the course of the book, but he does make a decision towards the end that goes against his usual way of doing things. He's starting to assert something of a moral agency in this book, inserting himself into a situation he would have tried to avoid, earlier in the series. For awhile, I had thought this series would be more of the "continuing adventures" type, where Garrett would have a new case every book but stay pretty much the same. Now, I'm not so sure about that. I think there could be an overall story arc for the series in the works, and I'm excited to see what that is.

Sometimes, I can't tell why the books in this series receive the titles they do. However, "Dread Brass Shadows" was easy to figure out. The main source of conflict in the book is the rumored existence of a book of shadows, containing magic that allows a person to assume the shape/appearance of someone else. The magic in this book is written on (hammered into?) sheets of brass. And multiple people are looking for it: Garrett, a witch, Garrett's client, a would-be sorcerer, a dwarf, and underworld kingpin Chodo Contague, just to name a few. I love the way Glen Cook plays the villains against each other. Not every book-seeker has the same motives and they're not all evenly-matched against each other. Balancing multiple competing parties is something Glen Cook is pretty good at, though; I've seen it in some of the Black Company and Dread Empire books, as well as in his Instrumentalities of the Night Series.

In the end, what I appreciate most are the unexpected elements and the push-pull among multiple individuals competing to gain hold of the same item. I like the development of a potential overarching series arc and some of the new and unusual alliances Garrett makes, in order to achieve his goals. I'm pleased that the main story doesn't seem repetitive when compared to previous volumes. (I'm not as thrilled on the descriptions of women's bodies, which I think are a little overdone.)

Kelly L. Stark
4.0 out of 5 stars It Is What It Is
Reviewed in the United States on December 17, 2018
Verified Purchase
A person probably won't start the Garrett series with this book, so by now the reader knows the series and its primary characters. And, like me, you've formed opinions. Either the characters are sufficient to keep you interested or not.

For me, they are. The parallels with one of my favorite series, Rex Stout's Nero Wolfe, are fun, though Garrett for me isn't as good a character as Archie Goodwin.

This one's a good read, shaking up the power structure of TunFaire a little and changing some relationships of the characters.
Read more
Helpful
Comment Report abuse

William Clodius
5.0 out of 5 stars Detective in a magical world investigates a case of too many redheads
Reviewed in the United States on June 8, 2013
Verified Purchase
The fifth in Glen Cook's generally excellent Garret P.I. series and one of the better ones. The core character is obviously inspired by Archie Goodwin, the central character in Rex Stout's Nero Wolfe series. Garret is an investigator who lives in an expensive mansion in a large city, with a largely immobile genius and a reliable male cook/housekeeper, has a way with the ladies, and calls on a number of other (usually male) "investigators" for assistance, a couple of whom are regulars in the series. However the city is in a magical world somewhat reminiscent of Terry Pratchett's Discworld (but not obviously flat), and the genius is not immobile because he is overweight, but because he is dead. Garret's personality is in some ways more reminiscent of Dresden, than Goodwin, but unlike Dresden, Garret has no intrinsic magic powers, though he sometimes has access to magical objects. As with Dresden Garret also has an undesired continuing relationship with a local unusual crime lord.

This book starts out with his main girlfriend being attacked in the street for no obvious reason, but investigation soon turns up another redhead with a similar build that others are interested in because of a book she is supposed to have. For various reasons Garret has to largely make do without the assistance of his normal "co-investigators", but acquires a new female one that I particularly enjoyed.
Read more
2 people found this helpful
Helpful
Comment Report abuse

BRKyle
5.0 out of 5 stars PLEASE READ THESE BOOKS!!
Reviewed in the United States on April 12, 2014
Verified Purchase
Glen Cook is a wonderful writer who can wring your heart one moment and have you guffawing with laughter the next. This series starts with "Sweet Silver Blues", and tells the more than shaggy dog story of a hard boiled ex-Marine private investigator in TunFaire, a fantasy city complete with elves, dwarves, trolls, and other critters and people as needed. Garret's partner is a dead creature that has decided to hang around a while. Think of them as a fantasy Nero Wolfe and Archie. They are funny and the mysteries play by the rules -- Cook usually gives you all that you need to know in the beginning.
Read more
One person found this helpful
Helpful
Comment Report abuse

Anon
5.0 out of 5 stars My fav of the series
Reviewed in the United States on September 18, 2018
Verified Purchase
I liked that there was a lot of Crask and Sadler in this book and that Winger recognized their deeper relationship; I'd had my own suspicions too and it was great to have it confirmed.
Read more
Helpful
Comment Report abuse

old IT guy
5.0 out of 5 stars Excellent.
Reviewed in the United States on May 18, 2016
Verified Purchase
Interesting alternative world. Sam Spade with elves, ogres, pixies, and something resembling Nero Wolfe , but more likeable. Well written, with lots of noir humor. And the hero gets knocked unconscious enough to qualify for an NFL pension. It won't win a Pulitzer, but fun to read.
Read more
Helpful
Comment Report abuse

Bruce 22
5.0 out of 5 stars This filled some holes in the Saga
Reviewed in the United States on January 25, 2013
Verified Purchase
Since, for a long time, the particular volume was out of print. For those who have a long history of PI Garrett in their head, this is the back story on many of his sidekicks. I have enjoyed all of Glen Cook's books beginning with the Black Company. He is a really fine fantasy writer.
Read more
One person found this helpful
Helpful
Comment Report abuse

Mar
5.0 out of 5 stars great book
Reviewed in the United States on December 7, 2014
Verified Purchase
I have enjoyed all of the Black Company books.the Garrett series are just as fine. I love all the plots with in plots and trying to second guess what's coming next
Read more
Helpful
Comment Report abuse
See all reviews