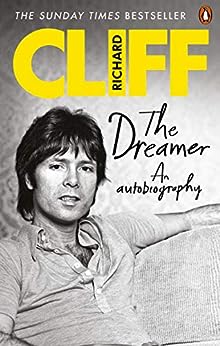 The Dreamer: An Autobiography Kindle Edition

by Cliff Richard (Author) Format: Kindle Edition
See all formats and editions
Sorry, there was a problem loading this page. Try again.

'Before Cliff Richard and the Shadows, there was nothing worth listening to in British music.' - John Lennon.

Cliff Richard tells his story, in his own words, in his highly anticipated new autobiography.

Achieving a hit in every decade since the 1950s, Cliff Richard stands alone in pop history. Coming of age in 1950s London, he began his music career at Soho's legendary 2i's Cafe, and now he's approaching his 80th birthday with record sales of over 250m and counting.

Cliff Richard was a pioneer, forging the way for British rock 'n' roll with his unique sound. The original British teen idol, his incredible story takes us into the studio of TV's first pop show Oh Boy!, through 40 years of Top of the Pops, and playing live up and down the country and across the world, with a constant backdrop of screaming fans.

Cliff looks back on his humble upbringing, and how he went on to fulfil his wildest dreams by becoming a pop star and even a film star. He talks about finding Christianity, reflects on the ups and downs of life in the public eye, and reveals how the false allegations against him changed his life forever.

He's seen era-defining pop stars come and go, and he's still making new music, with a new project to be released this year. As a teenage Elvis-fan in Cheshunt, this may have seem a distant dream. Here's his story of how he made it all happen.

Sir Cliff RichardOBE is a British singer, musician, performer, actor and philanthropist. He has sold more than 250 million records worldwide. --This text refers to the paperback edition.

Suzi
5.0 out of 5 stars Cliff Richard A Treasure!
Reviewed in the United States 🇺🇸 on November 13, 2021
Verified Purchase
Cliff lives a life of faith and music! I couldn’t put this book down! Cliff explains his journey, and I respect him more than any other entertainer! Worth buying! My favorite book!
Read more
One person found this helpful
Helpful
Report abuse

LINDA MAXON
3.0 out of 5 stars Not the story I was expecting
Reviewed in the United States 🇺🇸 on February 13, 2022
Verified Purchase
Maybe Cliff Richard has had a boring life outside of his music career. I feel this book was about his recording career and various managers. Maybe he needed a better ghost writer to make it interesting.
Read more
Helpful
Report abuse

Keith Wilfort
5.0 out of 5 stars Excellent read for any fans of Cliff or the history of Pop music.
Reviewed in the United States 🇺🇸 on June 26, 2021
Verified Purchase
Great read. The story of the pop legend that is Cliff Richard direct from the man himself. It details the highs and lows of a fantastic career in music and showbiz that began over 50 years ago.
Read more
One person found this helpful
Helpful
Report abuse

Cindy Keenum
5.0 out of 5 stars The. Dreamer
Reviewed in the United States 🇺🇸 on April 21, 2021
Verified Purchase
I love Cliff Richard and enjoyed both of his books very much. He doesn’t over write and gets to the point. Tells it like it is. His music is great too.
Read more
One person found this helpful
Helpful
Report abuse

C. A. Smith
5.0 out of 5 stars Sir Cliff Richard 60 years and still rocking.
Reviewed in the United States 🇺🇸 on January 3, 2021
Verified Purchase
Amazing history of one of the greatest pop stars, a history covering sixty years. What other artist alive today can say this. Also good to hear it in his own words. Bought the book and had it on my kindle.
Read more
3 people found this helpful
Helpful
Report abuse

Dan Lacksman
5.0 out of 5 stars You will learn a lot of facts about this period !
Reviewed in the United States 🇺🇸 on January 15, 2021
Verified Purchase
Very interesting and honestly written : a must read !
Read more
One person found this helpful
Helpful
Report abuse
See all reviews

MR R G Case
5.0 out of 5 stars Excellent Book. A moving honest autobiography
Reviewed in the United Kingdom 🇬🇧 on October 29, 2020
Verified Purchase
It’s awesome and very informative about Sir Cliff and his amazing journey to where he is now. And also very moving and I found the chapter on the unnecessary horrific experience Cliff went through very upsetting, for a decent man who has brought us nothing but happiness, through the years.

B. Crossland
4.0 out of 5 stars Okay but ,
Reviewed in the United Kingdom 🇬🇧 on November 9, 2020
Verified Purchase
My first 45 single was by Cliff Richard , living doll in1959.
On and off I've been a fan ever since. Bought many of his records over the last 60 years!
I've just finished reading his autobiography.
It's a strangely unsatisfying read.
Lots of facts and figures, lots about his shows, films music, as one would expect,...but, unlike a lot of rock/pop life stories, he is somehow holding back all the time.
He guards his image relentlessly, I don't know what he likes in his women, or his favourite food, or anything.
I'm sure he isn't as vacuous and shallow as this book makes him seem, but compared with recent autobiographies by Sting ,Roger
Daltrey and Keith Richards it's very unedifying.
Sorry sir Cliff!
Read more
25 people found this helpful
Report abuse

Ann
5.0 out of 5 stars A book to treasure
Reviewed in the United Kingdom 🇬🇧 on November 7, 2020
Verified Purchase
I’ve been a fan of Cliff’s for over 40 years and have all his CDs, DVDs and most of his books. I’ve also had the absolute pleasure of seeing him in concert close on 30 times. Anyone who’s been a fan that long already knows his life story but nevertheless I still wanted this book. It’s Cliff’s story in his own words and it’s full in interesting anecdotes and also extremely moving in parts. I also bought the audiobook from Audible and it’s lovely that Cliff has narrated the whole thing, it’s over 10 hours long and comes across much better than the book as you feel he’s only talking to you, which he is of course. His humour shines though and sadly also his despair during the horrific time of his life that we know all too well about, unfortunately. What’s great though is his ongoing enthusiasm for the future, he talks in detail of his tour next year that had to be postponed and he sounds like a kid at Christmas, so excited about everything to come and reiterated the fact that he’s not even thinking of retirement any time soon. He’s just got such a zest for life, which I love! You can’t say that about many 80 year olds! Just amazing! ❤️ Any fan will love this book and it’s one to treasure.
Read more
21 people found this helpful
Report abuse

Bev Birken
5.0 out of 5 stars FANTASTIC
Reviewed in the United Kingdom 🇬🇧 on November 2, 2020
Verified Purchase
Fantastic book very interesting good value for money could not wait for it to arrive I'm half way through it now😊 put it on order as soon as it was available to do so my idol been a massive fan of his for over 45 years since I heard move it been hooked on his music ever since.waiting now for his new album to arrive well done sir cliff 👍
Read more
11 people found this helpful
Report abuse

celia wallace
3.0 out of 5 stars Tedious
Reviewed in the United Kingdom 🇬🇧 on November 5, 2020
Verified Purchase
Ahhhh..... And all is well. OK if you're a die hard fan of Cliff's otherwise repetitive and narcissistic.
Read more
10 people found this helpful
Report abuse
See all reviews
Report an issue
Does this item contain inappropriate content?
Report
Do you believe that this item violates a copyright?
Report
Does this item contain quality or formatting issues?
Report