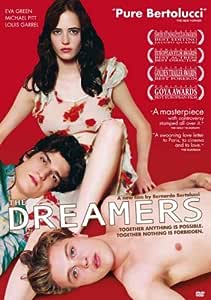 The tumultuous political landscape of Paris in 1968 serves as the backdrop for a tale about three young cineastes who are drawn together through their passion for film. Matthew, an American exchange student, pursuing his education abroad in Paris, becomes friends with a French brother and sister duo, named Theo and Isabelle, who share a common love of the cinema. While the May 1968 Paris student riots--which eventually shut down most of the French govenment--are happening around them, the three friends develop a relationship unlike anything Matthew has ever experienced, or will ever encounter again.

4.5 out of 5 stars
4.5 out of 5
871 global ratings
How are ratings calculated?
To calculate the overall star rating and percentage breakdown by star, we don’t use a simple average. Instead, our system considers things like how recent a review is and if the reviewer bought the item on Amazon. It also analyzes reviews to verify trustworthiness.

Ancora Imparo
5.0 out of 5 stars A film for film lovers
Reviewed in the United States on June 13, 2019
Verified Purchase
The Dreamers is based loosely on Jean Cocteau’s Les Enfants Terribles, and more directly on Gilbert Adair’s The Holy Innocents (Adair also wrote the screenplay for the film), which was inspired by Cocteau’s earlier work. I haven’t read Adair’s work, but I’ve read Cocteau’s and I found it strange and dreamlike, much like this film, which is to me much more enjoyable than Cocteau’s book (though that is still a seminal work). The cast, including Eva Green, Louis Garrel and Michael Pitt are incredibly beautiful. Set against the backdrop of the Paris student protests of 1968, Bernardo Bertolucci’s film is beautiful, sexy and disturbing all at the same time, while paying homage to silent film, classic Hollywood and French New Wave throughout. This is to me one of the greatest films of the 21st century so far and my favorite by Bertolucci (though it is undoubtedly not for all).
Read more
3 people found this helpful
Helpful
Comment Report abuse

Aussieson
5.0 out of 5 stars This masterpiece is so odd, enthralling, and precious –– I fell in love.
Reviewed in the United States on March 26, 2017
Verified Purchase
This is a must-have film in my collection. I have gifted it SO many times. Keep your mind open when you see this film. Seeing as it's based in France, there are some very interesting scenes in here...and that is what makes the film so rich! You learn about the different forms of love and come to appreciate every single one of them. This film is for everyone who wants to have a new perspective on life; for those who are in love with the 60's, French culture, masterpiece films, & beautiful actors. This film will keep your interest. It is so odd, enthralling, and precious.
Read more
5 people found this helpful
Helpful
Comment Report abuse

KG
4.0 out of 5 stars Not my favorite Bertolucci film, but well worth seeing.
Reviewed in the United States on July 19, 2012
Verified Purchase
Once again, Bertolucci explores his favorite themes of politics, the nature of individuality vs. belonging and
transgressive sex.

In 1968 Paris, as the protests that began around cinema threaten to expand and bring down the
government, an odd manage-a-trios develops between a young American and a twin brother and
sister, whose relationship is full of borderline incest. The three form a tight circle and almost forget
the world outside while dunk on booze, sexuality,and each other. But by the end, the maelstrom outside
is too powerful to simply be ignored.

This is a very good film, but for me, not quite a great one. The depths of these characters aren't explored the
way Bertolucci does in, say `The Conformist', and there are even some places where it feels like he pulls his
punches (not a director one thinks of doing so.) But the homosexual attraction between the brother and the
American is reduced to an occasional ambiguous smoldering glance. That aspect, among others, was far
more explicit in the novel.

None-the-less, the film is beautifully made (some terrific editing that inserts images from other films that
relate to and comment on the story), and the acting is solid (and bold. While the sex itself isn't that much more
explicit than in many R rated films, the amount of relaxed nudity is, and that meant these young actors had to
really throw off their inhibitions to make many scenes work.

Avoid edited versions - this film is largely about sexuality, and watering down that element waters down the film.

Leslie Noland
5.0 out of 5 stars For those who can appreciate it, a real gem.
Reviewed in the United States on October 24, 2012
Verified Purchase
This is an amazing movie. If you have been reading any of these reviews I am sure it goes without saying that it is not for everyone so I won't dwell on that. I will address the nudity/sexual aspects of the film up front by simply repeating what many of the other reviews have said: there is certainly nudity, openly sexual scenes, and a variety of taboos explored in varying degrees, but they are presented rather matter-of-fact and not with strong eroticism (though, I admit that for any red-blooded, heterosexual male, even if she were just sorting socks or filling out a tax return, it would be hard to judge any scene with a nude Eva Green as "not erotic").

I believe that the sex primarily reinforces the innocence, or naivete, of the twins' -- Isabelle and Theo's -- private universe where they, as spoiled child-adults, endulge any desire or whim. This is in contrast to the anger and intensity which dominates their pretense at social-activism, driven by simple-minded reaction (war -- bad) to the turbulent times (the 60's). But they are just two sides to the same coin -- they truly are "Dreamers", detached from reality by a wall of denial. When anything happens which forces them to deal with reality, such as having the true nature of their relationship discovered by their parents, the results are not pretty. (Actually, it is a little ambitious to suggest that their parents discovered the true nature of their relationship when it isn't clear that even they understand the true nature of this confusing mix of polyamory, bisexuality, incest, voyeurism, fraternity, obsession, and just a hint of sadomasochism.) Matthew, the young American student whom they "adopt," is torn between the seductive nature of their universe (including his attraction to and love of Isabelle and Theo) and his own grounding in reality -- though he is as young as they are, he possesses a maturity and true thoughtulness which they lack. So long as they all remain primarily isolated in their apartment, their private universe mostly prevails, but in the end their differences in the "real" world is what tears them apart.

The acting is superb throughout -- there is some very impressive work here. The cinematography is also excellent and the use of clips from classic films is brilliant, reinforcing not only the establishment of the characters' love of cinema but also the degree to which these "dreamers" are lost within their fantasies. The ending is amazing and rather abrupt. (mild spoiler alert) It will likely leave most viewers feeling a bit unfulfilled but that fits the movie. The ending likely would leave the characters feeling unfulfilled -- ultimately, no matter how much he wanted to be a part of Isabelle and Theo's universe, Matthew could never remain there. When reality came crashing through, the characters acted according to their nature and their differences severed the bond for good.

Some have complained that the film is too slow. It is a bit slow but when doing a character-study, how much "study" is too much? How much is enough? I, personally, was riveted throughout. Those who were not riveted, likely weren't really connecting with the movie anyway and more aggessive editing likely would not have changed that. The movie is not for everyone.

The only other Bernardo Bertolucci movie I have seen is "Last Tango in Paris" about which I was not very enthusiastic. It was an impressive film but ultimately I could not buy into the story -- I found the characters and situations ultimately unbelievable and that made all the good things in it difficult to appreciate. The same thing could have happened here -- these characters certainly are not like anyone I know or would even imagine but the acting, the script, and the directing drew me in -- I rather imagine that for many, that was not enough, and they wound up disliking the film as a result. I can't explain why it worked for me and I sure can't say whether it will work for you but the bottom line is, it worked for me. I enjoyed this movie.
Read more
17 people found this helpful
Helpful
Comment Report abuse

RGZ
5.0 out of 5 stars OK for US Blu-ray
Reviewed in the United States on August 4, 2015
Verified Purchase
Eva Green is incandescent, what else can I say. Read the reviews describing the film and Bertolucci's vision. Die Traumer is the Germany release of The Dreamers, aside from the original English dialogue with some French thrown in, it is also dubbed in Deutsch. It also has subtitles in German. The Blu-ray disc is not Code limited, so will play on US Blu-ray players. The seller I bought from is M+L (Marc&Lucas). I ordered it on July 30,it was shipped via AirMail from Dusseldorf and it was delivered by USPS on Aug. 4.
Read more
8 people found this helpful
Helpful
Comment Report abuse
See all reviews

Andrzej K
5.0 out of 5 stars VIVA EVA AND VIVE LA PARIS
Reviewed in the United Kingdom on May 30, 2017
Verified Purchase
Bought this as i adore Eve Green, who stars in her first feature film. Aside from generous amounts of Eva's superb bod on show, and largely suggested (rather than explicit) incest, this is a story of friendship during the student riots of 1968, with intercut real footage of the time. If you love early Eva Green and/or a dramatic portrayal of Paris life in the late 1960's, then give this film a screen.
Read more
6 people found this helpful
Report abuse

TurboRay
5.0 out of 5 stars Eva Eva Eva!
Reviewed in the United Kingdom on January 3, 2019
Verified Purchase
Well, the movie's ok/Good! Interesting but a little plot thin! But it's a must see for any Eva fan! The most beautiful woman in the world? I'd say YES!
Read more
2 people found this helpful
Report abuse