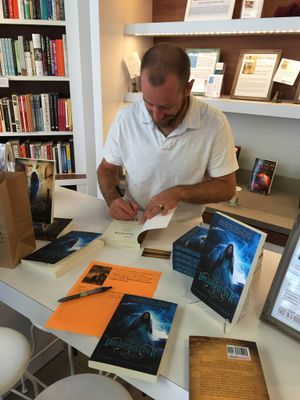 "DREAMWIELDER is an exciting tale that blends the high adventure and courtly intrigue of the classic epic fantasy with a fresh, new magic born of the infinite and dangerous power of dreams. Plots and plans are intricately woven into a bold adventure that rockets to a thrilling and satisfying conclusion in the grand tradition."―Misty Massey, author of MAD KESTREL

"I enjoyed this book immensely. It's fast-paced, colorful, and richly detailed. It'll pick you up quick and won't let you down again until it's over. My kind of book." ―James P. Blaylock, World Fantasy Award winner, author of THE AYLESFORD SKULL and THE LAST COIN

Garrett Calcaterra is an author of dark speculative fiction. His books include Dreamwielder, The Roads to Baldairn Motte, and Umbral Visions. In addition, his short work has appeared in dozens of magazines, journals, and anthologies. He is a member of the National Writers Union and teaches writing at various academic institutions. When not writing, he enjoys hiking with his two dogs and quaffing good beer.

Robyn Bennis
5.0 out of 5 stars A grimy steampunk world lit by the fading glow of high fantasy
Reviewed in the United States on February 13, 2017
Verified Purchase
A fresh and fantastic spin on steampunk! Set in a once-magical realm, where steam engines have replaced wizardry on the order of a vicious and totalitarian emperor, Dreamwielder follows Makarria, the last hope for stopping the extermination of magic-users.

Dreamwielder effortlessly blends genres. A chosen child navigates a grimy steampunk world lit by the fading glow of high fantasy. Although this is only the first book in the series, it's epic in its own scope, following multiple characters through rural backwaters, icy wastes, smoke-filled cities, and even aboard a mighty airship.

This was a real treat. The characters are fun and interesting, the action is intense, and the story moves at a fast pace—with lots of twists, and lots of dark corners to explore. Highly recommended!

Juniper Nichols
4.0 out of 5 stars Better than Queen of the Tearling
Reviewed in the United States on September 8, 2016
Verified Purchase
For fans of Queen of the Tearling, I'll do you one better. I don't think I've ever seen such an imaginative "lost heir" story, and the magic system is like nothing I've seen before. Makarria is believable as a very young teen while still growing into amazing powers. It's difficult to write a character who can turn dreams into reality without turning her into a "Mary Sue" who can't fail, but Calcaterra pulls it off. Add to that a setting that is somewhere between medieval and steampunk, and you've got one very unusual and worthwhile read. It won't go down as one of my favorite books of all time, but I'm glad I read it and the sequel, Souldrifter. It's waaaay better written than Queen of the Tearling, which got such raves. Read this instead.
Read more
One person found this helpful
Helpful
Comment Report abuse

KSluss
3.0 out of 5 stars Sword and Sorcery Lite
Reviewed in the United States on July 23, 2013
Verified Purchase
Dreamweilder acknowledges traditional sword and sorcery elements without devoting a lot of page space to building a broad fantasy backdrop. Magic is readily available to its users without lengthy training or rituals, or special words or objects. Ancient elves, faeries, and talking unicorns will not make an appearance, but there is a very cool scent-hound: part woman, part beast, part machine used by the Emperor's men to detect the presence of magic.

Dreamweilder's dialogue is plainspoken and avoids extensive rhetoric. The novel's voice is very prosaic and not indicative of any particular time period. Calcaterra nods to conventional fantasy in naming characters like Caile and Makarria; and in the christening of mythic lands like Pyrthinia and Sargoth, but there are few "Thees" and "Thous" and no made up languages to discourage a tentative audience. His dialogue could use a little work.

Calcaterra takes the sharpest turn away from classical fantasy by integrating a steampunk component. The beginning of Dreamweilder reads as medieval, but once the audience travels to the realm of Sargoth, where Emperor Guderian has established his throne, we understand this story takes place at the turn of an era, the ending of an agrarian society and the establishment of an industrial one. While Prince Caile from Pyrthinia gallops around on horseback and Makarria and her grandfather voyage the oceans on a sailing ship, the residents of Sargoth travel in steam powered carriages and traverse the skies in airships. Phillip Pullman did something similar in the His Dark Materials trilogy. Calcaterra's juxtaposition, however, falls short of Pullman's mastery of nuanced political and religious commentary.

Most of Dreamweilder's characters, like the Emperor, are categorically good or evil. Wulfram, the Emperor's henchman is cold and vicious. Makarria is sweet and adventuresome. Her grandfather is brave and loyal. There are no sympathetic villains or anti-heroes harboring uncertain loyalties. Never will a character leave the reader guessing of his or her intentions.

Dreamweilder is ultimately an adventure story that will appeal to a broad age group. The main heroes are young, the language is mild, and the violence is moderate. I may have wished for a little more sophistication and complexity in character development and world building, but action adventure fans will be pleased with Calcaterra's knack for cutting away flab and getting straight to the plot.

JMJ
5.0 out of 5 stars Exquisite World-Building
Reviewed in the United States on June 15, 2015
Verified Purchase
How would you like the ability to instantly manifest your fondest dreams? It sounds like a fantastic superpower to have... until the power-hungry leaders of your world decide that your abilities are a threat to their rule. Young Makarria is one such "threat," and before she even understands her own power, she's forced to flee her home with only her grandfather as protection. Together they journey through a vivid world exquisitely laid out for us by a very capable author, proving that Calcaterra is, in fact, the master Dreamwielder.
Read more
2 people found this helpful
Helpful
Comment Report abuse

Craig
4.0 out of 5 stars Thrilling YA Adventure
Reviewed in the United States on December 30, 2015
Verified Purchase
Makarria's dreams are coming true, but rather than a blessing this magical gift attracts the attention of powerful enemies. Steam-powered war machines, magically bred monsters, and a powerful emperor hunt Makarria as she struggles to discover who she really is.

With a creative magic system and well-written action sequences, Dreamwielder is a fun, pulp-style adventure. Add in elements of steampunk and a political world in turmoil, and the book has enough hooks and twists to keep readers thoroughly entertained. Recommended for anyone who loves YA fantasy.
Read more
One person found this helpful
Helpful
Comment Report abuse

Amazon Customer
3.0 out of 5 stars Not for me
Reviewed in the United States on July 28, 2017
Verified Purchase
For me, this book is not enough. Yes, I am an adult reader, but I have read good YA before and this is unfortunately not it. It's too simple, every problem is basically solved within a few pages and the caracters have no development.
Read more
One person found this helpful
Helpful
Comment Report abuse

Terrence Willett
5.0 out of 5 stars Solid swords and sorcery
Reviewed in the United States on March 25, 2013
Verified Purchase
I have read quite a bit of fantasy and sci fi and it is very difficult to approach a swords and sorcery tale without being completely derivative. This book has interesting ideas and is compelling and entertaining. I appreciate how despite a medieval-esque-cum-industrial-revolution setting, it has a modern relevance with conflicts between technology and nature, strong female characters, and moments of moral ambivalence from the heroes. A recommended read!
Read more
4 people found this helpful
Helpful
Comment Report abuse

Cecile K
4.0 out of 5 stars Enjoyable read!
Reviewed in the United States on June 2, 2013
Verified Purchase
I am not normally a fantasy reader....I'm one of those hard-science sci fi readers who cringes at all the fantasy books crowding the sci fi section. (That said, I loved LOTR and am well aware that there's an inconsistency there!) I read this book on the urging of a friend, and I'm glad I did! Strong character development, but plot driven, this book definitely pulled me in from the get go. I read it while traveling, couldn't finish it before the plane landed, and HAD to settle in on the couch upon my return to finish it before I could do anything else! I'm looking forward to more books from this author.
Read more
Helpful
Comment Report abuse
See all reviews