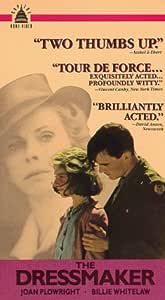 Share
STREAM ANYTIME with Prime Video from $10.99
Have one to sell?
Sell on Amazon

Set in 1944 at the end of WWII, The Dressmaker is the story of a Liverpool family torn apart when the youngest member becomes infatuated with a handsome American soldier.

The film stars two of Britain's greatest actresses, Joan Plowright and Billie Whitelaw, as two sisters locked in a love-hate relationship. Their simmering bitterness explodes into the open when their shy seventeen year-old niece (played by Jane Horrocks), whom they have raised since childhood, falls in love with an American G.I. To one of the older women he represents an erosion of the old ways, to the other the happiness she herself was denied. The relationship unravels, however, and forces the three women to confront their darkest fears.

The whole cast seems to rise to the occasion. I doubt if either Plowright or Whitelaw has ever been this effective on screen...Billie Whitelaw's blinding gaze feels as if it will stay on your mind forever. -- Pauline Kael, The New Yorker, January 6, 1989