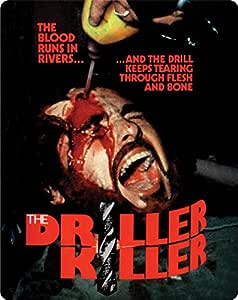 Abel Ferrara (Actor, Director), Carolyn Marz (Actor) Rated:
Unrated
Format: Blu-ray
4.3 out of 5 stars 114 ratings
Get 3 for the price of 2. Shop items
Available at a lower price from other sellers that may not offer free Prime shipping.

In career that has encompassed such controversial classics as Ms. 45, Bad Lieutenant and Welcome to New York, none of Abel Ferrara s films have quite managed to match the shock, extremity and downright notorious nature of The Driller Killer.

Ferrara plays struggling artist Reno, a man pushed to the edge by the economic realities of New York living in the late seventies and the No Wave band practising in the apartment below. His grip on reality soon begins to slip and he takes to stalking the streets with his power tool in search of prey...

Forgot Taxi Driver, The Warriors and The New York Ripper, The Driller Killer is the definitive look at NYC s underbelly a slasher that is as much at home in the arthouse as it is the grindhouse.

4.3 out of 5 stars
4.3 out of 5
114 global ratings
How are ratings calculated?
To calculate the overall star rating and percentage breakdown by star, we don’t use a simple average. Instead, our system considers things like how recent a review is and if the reviewer bought the item on Amazon. It also analyzes reviews to verify trustworthiness.
Top reviews

The Deuce
5.0 out of 5 stars Abel Ferrara Has Dangerous Art Damage for Us
Reviewed in the United States on January 13, 2018
Verified Purchase
I first saw this film when I was a much younger man, and I gotta confess, it didn't do a lot for me. The plot didn't seem all that coherent and the actors were just too neurotic and, well, real.

Well, like the mighty UFO once sang, "oh how the times have changed"...

Somewhere along the way I let my taste in film genre off of it's leash one day and the dang thing went wild. You know when a Horror film fanatic starts watching Musicals, there's gonna be trouble in the neighborhood, but among many other things, I got interested in the films of this Abel Ferrara guy.

Some of his movies were a challenge, but his style really started to to grow on me. This was a Director who not only took chances, but I believe he did so because he FIRMLY BELIEVED IN HIS VISION and would not allow them to be presented in any other way than what he saw as his art.

So I began to desire a revisit of this early Ferrara effort, and after seeing Ms. 45 awhile back and having my senses knocked sideways over it, I knew another date with The Driller Killer was inevitable. When I heard Arrow Video was planning a Director-Approved Special Edition of it, I started remapping my destiny.

Little did I know what was in store for me. Remember what put me off of the film when I was younger? Those are the very same qualities that I loved about it this time around! Only now I see that THIS IS AN ART FILM which is undoubtedly why I couldn't comprehend it as a Horror film back in the day.

One of the many extras provided here is a documentary called Mulberry St. that still haunts me, and that's only a portion of the treats in store. Now that I own it, I can't imagine living without it, and let's face it, that means a movie (and specifically a Special Edition of that movie) has delivered the goods.

duffy
2.0 out of 5 stars Very dark, morbid
Reviewed in the United States on November 8, 2020
Verified Purchase
I knew I was getting into a gritty atmospheric city urban film with this director. I had seen other films by Abel (The Addiction was far better, China Girl, Body Snatchers). I knew this was a video nasty/ exploitation/bloody film before going in, but I assumed it would be an artsy slasher film. Instead it was boring, slow, I was not into the punk music that kept playing and playing and playing, I wonder if it was meant to be a riveting nuisance intentionally to drive the audience mad along with the main character. I gave it two stars b/c the picture quality is wonderful and it was beautiful to see. But bc of my love for Ferrara, I tried very hard to continue watching I was tempted to shut it off. If you want to see great Abel Ferrara films, watch Ms.45 or Fear City, similar era, setting, and they were much more enjoyable. Driller Killer was slow. Though very wet with blood, this film was dry to me.
Read more
Helpful
Comment Report abuse

Splean
5.0 out of 5 stars Prime version
Reviewed in the United States on April 14, 2020
Verified Purchase
Currently there are 2 versions of the film on Prime:
Rogue is a poopy VHS transfer.
FilmRise is a high quality 16x9 transfer.
Choose wisely.
Read more
2 people found this helpful
Helpful
Comment Report abuse

Jeff Chapman
3.0 out of 5 stars Dont Let the Title Fool You
Reviewed in the United States on August 23, 2020
Verified Purchase
Despite the exploitation title, this is neither a slasher nor a horror move. Its just a character piece about an New York city artist slowly losing his mind. Yeah the guy eventually kills people with a power drill. But if thats all you're here for you'll be bored. Although it might be worth the watch simply for the look at sleazy, dirty 70s/80s NYC if that interests you.
Read more
Helpful
Comment Report abuse

Michelle Chapman
4.0 out of 5 stars DRILLER KILLER IN 4K!!
Reviewed in the United States on May 15, 2019
Verified Purchase
Revisiting this in HD is a definite must for any fan of 70-80's classic horror slasher flicks. The NY playground in these features is the star of the film
Read more
One person found this helpful
Helpful
Comment Report abuse

Joseph V
5.0 out of 5 stars late 70s Henry portrait of a serial killer?
Reviewed in the United States on December 15, 2016
Verified Purchase
Really enjoyed this movie! The version I watched was the prereleased one in full screen (the blu-Ray has the theatrical and prerelease version with full or widescreen aspect ratios) And it looked amazing. Reminded me a lot of Henry portrait of a serial killer. Special features are great too. Highly recommend this if your into character study horror films and/or period pieces .
Read more
6 people found this helpful
Helpful
Comment Report abuse

Jose Porras
1.0 out of 5 stars Did not receive the proper item that was described
Reviewed in the United States on February 10, 2020
Verified Purchase
Didn't get what was described in the details. Got two DVDs of the same movie (driller killer) it was suppose to have the blu Ray version and seller slipped another DVD print of the same film from another DVD press label .
Read more
Helpful
Comment Report abuse

karen
5.0 out of 5 stars great great great
Reviewed in the United Kingdom on July 14, 2018
Verified Purchase
love this dvd just perfect it has 2 different editions on the disc one of them has not ever been released before anywhere so i was well happy to have a different cut of the film to the usual ones, lush reversible cover also,i just cant find anything bad with this release just perfect and i would recommend anyone to add this film into their collections without hesitation
Read more
One person found this helpful
Report abuse

roy
4.0 out of 5 stars pleased with the item
Reviewed in the United Kingdom on December 26, 2016
Verified Purchase
dvd was new.wrapped in plastic.quick delivery..
Read more
Report abuse