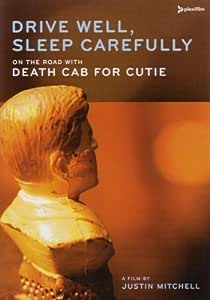 Drive Well, Sleep Carefully - On the Road with Death Cab for Cutie

Drive Well Sleep Carefully joins Death Cab for Cutie on tour in the spring of 2004. Filmmaker Justin Mitchell captured dozens of shows across the country and interviewed the band at length in their hometown of Seattle.

What Filmmaker Justin Mitchell captured in Drive Well, Sleep Carefully is a hybrid concert film and meditation on the strange loneliness and lure of touring. In the spring of 2004, Death Cab for Cutie were on the home stretch of their Transatlantisicm tour that spanned three continents over nearly four months. Mitchell (Dirty Old Town, Songs for Cassavetes) had never been to a Death Cab show before he hooked up with guitarist and vocalist Ben Gibbard, bassist Nick Harmer, guitarist and sometimes organist Chris Walla, and drummer Jason McGerr to shoot the tour's final three weeks, then met them in their hometown of Seattle for post-road interviews. The documentary catches the band at a moment fraught with possibility: after six years of extended tours, four acclaimed full-length albums, regular name-checks on The O.C., and the explosion of Gibbard's side project, the Postal Service, they're poised to trade hard-earned indie success for the wider possibilities offered by a contract with Atlantic Records.

Anyone getting their first look at Death Cab live on this film should expect to be set back on their heels by the band's capacity to tear it up. Theyre frequently called "poppy," but what transpires onstage is flat-out rock & roll. Mitchell tucks most of the interview and road footage between the film's 13 performances, but when he overlays images with the music or breaks for commentary, the effect is nearly always complementary. "Title and Registration" in New Orleans feels even more bleakly beautiful spliced with rainy bayou road images. "We Looked Like Giants" smoothly detours into Gibbard's musings on young love, then cuts back into the performance for a duel-drum-set jam session. "Styrofoam Plates" gets briefly interrupted for an eloquent digression on the funeral that inspired the lyrics; it's just unfortunate that for the remainder of the song the vocals sound so submerged. Given that most of Death Cab's fans are enamored with their lyrics, the film's major flaw is that they're occasionally buried and indiscernible, particularly when a performance takes a ferocious turn--but in consolation, these smackdowns are when the band seems most in their element.

After witnessing this enthusiasm, it's a little surprising to hear that the touring life has started to feel mundane. Aside from the occasional ascent up the speakers to keep things lively, theyre fighting this sensation by putting themselves in the mindset of the folks at their shows. For Harmer, playing huge rooms has made him obsessed with the guys in the back: "Are they rockin' out?" Walla says that he's been making more eye contact with fans on this tour "just to see what's going on," and he's delighted by the huge grins that elicits. Due to their relentless schedule and the "comfy cocoon" of their new tour bus, shows provide their only opportunity to connect and glimpse the impact they're making outside of the dream state of the tour. As McGerr describes it, "You can't see in front of you or behind you. You're engulfed in a fog, and you don't know what things will look like when the fog lifts." This film draws viewers to the edge of this fog, and they sense its charmed disorientation.

The whirlwind nature of the project (compared to, say, the seven years of film that went into DiG!) presumably didn't leave Mitchell the luxury of a ton of spare footage, but the disc includes several worthwhile extras. The "Stability" rehearsal's marred by the muddy, distant quality of the vocals, but the instruments are solid, and it's interesting to see their practice space. An acoustic set of three songs at San Francisco's Metreon comes with some fun banter (Walla declaring his reverence for Sarah Vowell, Gibbard jokingly deflecting a question about his side project), and the stripped-down performance offers a spare beauty uncommon at their electrified shows. The additional interviews include a demonstration of drummer McGerr's rhythmic prowess; a story about the band embracing the slickest stage they ever played and, in Harmer's words, "turning it into the Death Cab on Ice Show" (Gibbard: "I must have fell five or six times on my ass"); and more historical details from "producer, sometimes-arranger-type" Walla on the Hall of Justice studios, a building that, before--becoming the secret headquarters for tracking and mixing The Photo Album and much of Transatlanticism--witnessed the creation of Nirvana's Bleach. The Andycam feature will be most enjoyed by expats of Spokane, WA, for a drunken late-night walking tour of their city, including perhaps the most hilarious 10 seconds of the entire film--the grim look on Gibbard's face as the camera pans the only nightclub they could locate. But the best extra is an intense, gorgeous demo version of "Lightness" with vocal percussion, playing over a triumphant tour montage. If only the circular nature of Transatlanticism hadn't precluded burying this treasure at the end. --Mari Malcolm

4.2 out of 5 stars
4.2 out of 5
22 customer ratings
How does Amazon calculate star ratings?
Amazon calculates a product’s star ratings based on a machine learned model instead of a raw data average. The model takes into account factors including the age of a rating, whether the ratings are from verified purchasers, and factors that establish reviewer trustworthiness.
Top Reviews

lori scheufler
5.0 out of 5 stars Not for me so I can’t say much
Reviewed in the United States on February 21, 2019
Verified Purchase
Bought it for my son for Christmas who is a huge fan of this band.
Read more
Helpful
Comment Report abuse

Aaron
4.0 out of 5 stars Pretty Cool, Lots of Insight
Reviewed in the United States on March 2, 2006
Verified Purchase
Drive Well, Sleep Carefully is visually interesting with great tunes and tons of live footage. For those who are looking for a "live" dvd with uncut performances, this dvd is not for you. The whole disc feels more like a documentary than a live and uncut sort of disc. That's not entirely a bad thing, because voice overs add to the overall artistic feel of the disc. It seems like some people have given this dvd a lot of negative feedback because the members of Deatcab come off as whiny occasionally;however, it seems that many reviews that give negative feedback do not take into consideration that being a "rockstar" is a difficult job. Frankly, Deathcab is rather honest in many parts of the film, and Drive Well, Sleep Carefully shows a dimension of touring that a lot of music fans do not see. Overall, this disc is worth adding to a disc collection for non-Deatcab and Deathcab fans alike.
Read more
3 people found this helpful
Helpful
Comment Report abuse

DrumJ8
5.0 out of 5 stars Drive Well, Sleep Carefully
Reviewed in the United States on March 11, 2006
Verified Purchase
I had a Death Cab for Cutie phase, so this DVD was perfect. If you're only semi into them, or only like a few songs, you might not like the DVD. If they're at the top or near the top of your list of good music these days, I'd recommend it.
Read more
6 people found this helpful
Helpful
Comment Report abuse

Kaelan
5.0 out of 5 stars Amazing
Reviewed in the United States on December 3, 2011
Verified Purchase
I'm the biggest dcfc fan so this documentary was a must. Watched it probably 20 times. Others I showed it to who didn't know the band enjoyed it too.
Read more
Helpful
Comment Report abuse

Michael Hines
5.0 out of 5 stars Fantastic
Reviewed in the United States on June 26, 2007
Verified Purchase
This DVD is amazing. It covers the majority of Death Cabs best two albums in the Photo Album and Transatlanticism and the extra commentary lets you into the creative mind of Ben Gibbard. By the dvd you wont be disapointed.
Read more
Helpful
Comment Report abuse

Thomas A. Wright
4.0 out of 5 stars great death cab documentary
Reviewed in the United States on March 8, 2007
Verified Purchase
get the behind the scene look at how hard these guys tour.
Read more
Helpful
Comment Report abuse

Danilo C. F. Souza
5.0 out of 5 stars A great experience
Reviewed in the United States on November 8, 2009
Verified Purchase
I`m on the road with Death Cab!!!! I recommend this dvd for all that are fans of this great band. it` so amazing!
Read more
Helpful
Comment Report abuse

L. Rose
5.0 out of 5 stars death cab cutie
Reviewed in the United States on July 27, 2006
Verified Purchase
As you folks know, I've been buying Death Cab for a Cutie over the past year. So getting DVD should be no surprise to you.

This is a fine back ground piece to anyone that enjoys or follows Death Cab. They have a sound not unlike the one us Pink Floyd fanciers enjoy. If you like Pink Floyd for their innovativeness in music. You will like Death Cab. no more to be said.

sandra smith
5.0 out of 5 stars present
Reviewed in the United Kingdom on March 5, 2013
Verified Purchase
this present was given as a xmas present and thoroughly enjoyed by the recipient and would recommend to family and friends thanks
Read more
Helpful
Sending feedback...
Thank you for your feedback.
Sorry, we failed to record your vote. Please try again
Report abuse

Pork and Beans
5.0 out of 5 stars What a great band.
Reviewed in the United Kingdom on January 1, 2012
Verified Purchase
I simply love DCFC. They're really genuine. This documentary shows this perfectly. Highly recommended for new listeners or old time fans.
Read more
One person found this helpful
Helpful
Sending feedback...
Thank you for your feedback.
Sorry, we failed to record your vote. Please try again
Report abuse

Fraudulent Zodiac
5.0 out of 5 stars Legends
Reviewed in the United Kingdom on October 6, 2014
Verified Purchase
It's Death Cab. So it's brilliant.
Read more
Helpful
Sending feedback...
Thank you for your feedback.
Sorry, we failed to record your vote. Please try again
Report abuse

Matthew Morris
5.0 out of 5 stars A must see for Death Cab fans.
Reviewed in Germany on January 24, 2019
Verified Purchase
What can I say? I've watched this movie over 20 times. It's a great watch for big Death Cab fans.
Read more
Helpful
Sending feedback...
Thank you for your feedback.
Sorry, we failed to record your vote. Please try again
Report abuse
Load more international reviews

See all reviews from the United States
Pages with related products. See and discover other items: on the road movie