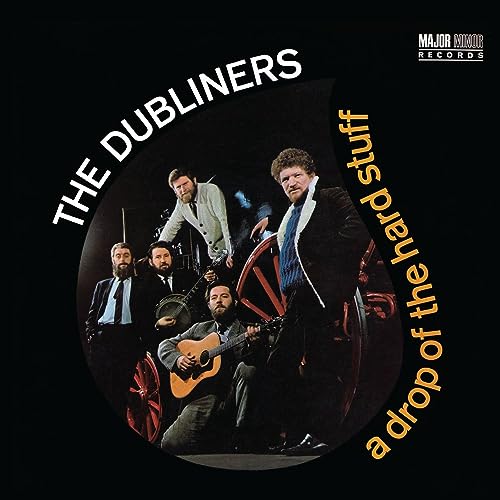 4.9 out of 5 stars
4.9 out of 5
24 global ratings
How are ratings calculated?
To calculate the overall star rating and percentage breakdown by star, we don’t use a simple average. Instead, our system considers things like how recent a review is and if the reviewer bought the item on Amazon. It also analyzes reviews to verify trustworthiness.
Top reviews

William M. Feagin
5.0 out of 5 stars At long last...
Reviewed in the United States on July 22, 2012
Verified Purchase
...the Dubliners' four albums for the Major Minor label have finally been released on CD, and it's about time! Sadly, at the time of this writing, all four of the original members who came together at O'Donoghue's Pub in Dublin in 1962 have passed on, Barney McKenna being the last of them this past April (2012). Perhaps that was what motivated EMI into action, perhaps it was a long-delayed plan. Whatever the reason, at last these albums are available to us, digitally remastered.

A Drop of the Hard Stuff was the first of these albums, and one of only two to be released in the United States (Epic/CBS) - the follow-up, More of the Hard Stuff, was the other; Sony released a compilation, The Very Best of the Dubliners, a decade ago that cherry-picked 16 of the best tracks from the two albums, but the sound quality was less than perfect, possibly because Sony did not own the original masters. This album now comes to us in remastered mono, as do the other three; it opens with the Dubs' big hit, "Seven Drunken Nights," which Ronnie Drew introduces by saying they're "only allowed to sing five of 'em - so here goes." Even in this truncated form, the song was banned by the BBC and RTE but was in regular - indeed, heavy - rotation on the pirate radio station Radio Caroline, and climbed to #7 in the British pop charts in 1967. "The Black Velvet Band" was the next single from this album, a song about being transported to Australia for one's crimes - even if one was framed, as the song's protagonist is. Luke Kelly also lends his considerable vocal talents to "The Galway Races," a song which requires one to be able to sing each verse without needing to draw breath and which is about the annual horse racing event in the west of Ireland. There's "Weila Waile," an Irish murder ballad that's part of the "Cruel Mother" family of ballads; "The Rising of the Moon," made popular in the States by the Clancy Brothers and Tommy Makem and recalling the 1798 Rising; and there's a cover of Ewen MacColl's "The Travelling People," recalling the disappearing way of life of "every tinker, rolling stone and gypsy rover." And what set of ballads would be complete without "I'm a Rover," a variation on "The Night-Visiting Song"?

And lest you think the Dubliners are yet another ballad group, think again - they display considerable instrumental talents on "Col. Fraser & O'Rourke's Reel," "The Fermoy Lasses & Sporting Paddy" and "Limerick Rake," proving once and for all that they are the missing link (and not really so missing at that) between the Clancys and Makem and such tune-oriented groups as the Chieftains. The talents of the late and lamented Barney McKenna on banjo and mandolin and of John Sheahan (thankfully still in this plane of existence and the one remaining member of the Dubs' classic 1965-74 lineup) on fiddle, mandolin, bouzouki and pennywhistle cannot be overstated.

As I said before, all four of these albums are in remastered mono, but one channel sounds as good as one channel always has, and really, what more do you need? They are finally here to be enjoyed in their entirety. Pick up this one, and then the three follow-ups - More of the Hard Stuff, Drinkin' & Courtin', and At It Again! If you like Irish folk, these will not disappoint in the least.
Read more
15 people found this helpful
Helpful
Report abuse

SNassif
5.0 out of 5 stars Five Stars
Reviewed in the United States on April 7, 2016
Verified Purchase
Doesn't get more authentic that his. The Dubliners are the real deal.
Read more
Helpful
Report abuse

Jerry Guild
5.0 out of 5 stars A n excellent album,released in 1966 on Vinal LP.
Reviewed in the United States on April 21, 2014
This album has been around for a long time,almost 50 years now,and recently remastered and released as an MP3.This was one of the early releases of one of Ireland's most popular groups. Those who participated on this album were Ronnie Drew,Luke Kelley,Barney Mackenna,Ciaron and John Sheahan.Luke at 26,Barney at 27,Ciaron at 31 and John at 27 1/2 ,the original members and were just getting the success of the Dubliners started.Although the band carried on ,and even had replacement members,they continued to perform most of the songs on this album at their shows until just a few years ago.One by one,the members passed away ,Luke Kelley,the first to go at only 44 in 1984.
The voices of all these musicians have been quieted by the ravages of time;but thankfully for recordings,their music is still with us to be enjoyed.
I have the Vinyl LP version and the sound quality is excellent.The album cover has the same photograph as shown here where the members were in their mid-twenties.On the back of the album cover there is some interesting information about the band and the members.
The 14 tracks are identical as shown here for the MP3.
Read more
3 people found this helpful
Helpful
Report abuse
See all reviews

James B. Spink
5.0 out of 5 stars Their first album for Major Minor
Reviewed in the United Kingdom on January 30, 2013
Verified Purchase
The Dubliners released three albums on the Transatlantic label between 1964 and 1966, but it wasn't until they moved to Philip Solomon's new Major Minor label in 1967 that they had their real success. A Drop of the Hard Stuff was released in the spring of 1967 and started with what would become their biggest hit - Seven Drunken Nights. Although the risqué lyrics stopped the disc being played by the BBC Philip Solomon just happened to be a director of the offshore Radio Caroline so airplay was not going to be a problem! Anyone listening to Caroline in those days would have been VERY aware of the heavy rotation of Major Minor singles and the endless plugging of the associated albums by the station!

A lot of the material released by Major Minor was actually very good, and the four albums released by the Dubliners for the label still sound great today. It may be surprising then that these albums have never been issued on CD before - although most of the tracks have appeared on various compilations over the years. The Major Minor label ended up as a part of EMI and was mothballed for many years (it was briefly revived for a Morrissey album in 2010!), but EMI have now finally given the four Dubliner's MM albums the re-issue they deserve.

The four Major Minor albums include this one, it's follow-up -More of the Hard Stuff- from later in 1967 and the two albums from 1968 - Drinkin' & Courtin' and At It Again. All have been freshly remastered in 2012 by Peter Mew at Abbey Road studios from the original MONO master tapes (most compilations use the stereo mixes). The thin accompanying booklet contains an essay by John Tobler, front and back reproductions of the original sleeve, facsimiles of the disc labels, track details and a couple of photos of the band.

The Dubliner's numerous fans will have waited many years for these re-issues and they do not disappoint. A presentation of the four discs as a box set to mark the band's 50 years in the business would perhaps have been even better, but you can currently pick up the set of four from Amazon for less than twenty quid so they represent pretty good value even so. Newcomers to the band's music may be better off with a compilation album to start with - I would suggest EMI's Original Dubliners from 1993, which contains tracks from the four Major Minor albums and also tracks from the band's next two albums after the band had moved to EMI.

This re-issue is a straightforward version of the original album in mono with no bonus tracks and is aimed at those who remember the LP and want to have good sounding versions of these tracks in their original album order. For that target audience I give this CD five stars.
Read more
7 people found this helpful
Report abuse

Kevin J McGlue
5.0 out of 5 stars All time classic album
Reviewed in the United Kingdom on May 2, 2013
Verified Purchase
This is an all time classic. It's the original Dubliners line up at their very best and singing some of their best songs. Ronnie Drew's distinctive voice is a joy to listen too. Compilations are all very well, but you can't beat hearing an original album as it was intended. If you're a Dubliners fan you must own this. If you're wanting to discover The Dubliners or Irish music then this is a wonderful place to start.
Read more
Report abuse

pierre mck
5.0 out of 5 stars the dubliners- a drop of the hardstuff.
Reviewed in the United Kingdom on August 17, 2013
Verified Purchase
sounds even better then when i first heard it in 1967.I lost or swapped the first 2 albums so its great to hear again and the sound quality is top notch.
Read more
Report abuse