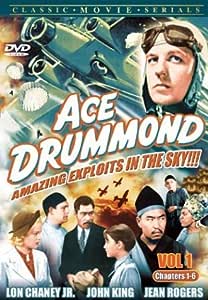 Add to Cart
$6.98
& FREE Shipping on eligible orders. Details
Sold by: Amazon.com
Have one to sell?
Sell on Amazon

Based on the comic strip by beloved World War I flying hero Eddie Rickenbacker, this popular serial of the '30s follows the adventures of master pilot Ace Drummond, "G-Man of the Air!" Ace travels to Mongolia to investigate air catastrophes. The mysterious villain known as The Dragon has sabotaged the planes using radar and a secret remote controlled communication device. Ace meets the beautiful Peggy Trainor (Jean Rogers of Flash Gordon fame) who is searching for her lost archaeologist father and the two join forces in their quests. With high speed auto chases and death-defying aerial footage, Ace faces sure disaster in each chapter.

David James
5.0 out of 5 stars Takes Me Back
Reviewed in the United States on May 14, 2007
Verified Purchase
I was one of those kids who walked or biked down to the neighborhood theater near Emory University on Saturday mornings to see John Wayne or Audie Murphy. Important parts of the presentation besides the cheap admission and popcorn were the News of the World, the Walter Lance cartoons and the Serials--two or three episodes in succession--that came before the feature. This brings it all back: the hero and heroine, both "pure" and strong, the wonderful old planes, the "prayer wheel," the exotic locations and improbable cliff-hangers. Can't be beat.
Read more
6 people found this helpful
Helpful
Comment Report abuse

hawkeye
5.0 out of 5 stars From the comic strips
Reviewed in the United States on January 6, 2014
Manure hides a mountain of Jade in Mongolia, but that isn't
what stinks: Terrorists after all that Jade are knocking
planes out of the sky. Our charming hero (John King) can
only sing, he doesn't have a clue yet to what's going on.
Neither do we with so many oddballs popping in and out.
Zooming along with a song we meet the mastermind behind all
the villainy, The Dragon, a high flying ace himself. Will
his wings be clipped? Will the skies ever be safe again?
Will Ace Drummond ever stop singing???
Ace Drummond was a character created by World War I flying
ace and Medal of Honor winner, Eddie Rickenbacker. Air
battles he fought with the infamous Red Baron of Germany
earned him the title Ace of Aces. Both men flew flammable
canvas covered bi-planes and learned only during flight
what worked and what didn't.

J. Lovins
HALL OF FAME
5.0 out of 5 stars "The King of Serials...VCI Entertainment ~ Ace Drummond (1936)"
Reviewed in the United States on November 25, 2005
VCI Entertainment and Universal Pictures present "Ace Drummond" (1936) (Dolby digitally remastered), featuring 13 Chapters based on the newspaper comic strip of the exploits of America's WWI Aviation Ace Captain Eddie Rickenbacker (America's beloved Ace of Aces, the inspiration of Youthful Airmen the World over)...who is this mastermind who calls himself "The Dragon", and why is he trying to stop a certain airline of International importance...is there a treasure that is just waiting to be plucked from a nearby mountain...why is Ace Drummond (King) traveling to Mongolia and will his secret identity be discovered before his work is done...what is the real reason Peggy Trainor (Rogers) has entered the picture, could her archaeologist father be the answer..why is Jerry (Beery) and Little Billy (Morrow) enlisting the "Holy One" (Post) to join the fight against this evil villain....who can explain Lon Chaney Jr's performance as the oriental henchman without the aid of a full moon to rely on...don't leave the theater until the final chapter is over and done with "The World Akin"....just remember double thrills, chills, mystery and suspense...hitting the bull's eye with excitement...don't miss a single spine thrilling episode..return next week to this local theater for another episode of action and adventure that will keep you thrilled until the next chapter.

Under director's Ford Beebe and Cliff Smith two of the best in the serial genre, producer Bud Koenig and Barney A. Sarecky, Original screenplay by Wyndham Gittens, Norman S. Hall, Ray Tramps and Eddie Rickenbacker (character), musical score by Clifford Vaughan, Arthur Morton, Sam Perry and Heinz Roemheld, Franz Waxman, the song "Give Me A Ship and A Song" by Kay Kellogg ...the cast include John "Dusty" King (Ace Drummond), Jean Rogers (Peggy Trainor), Noah Beery Jr (Jerry), Guy Bates Post (The Grand Lama), Lon Chaney Jr ( Ivan-henchman), Jackie Morrow (Billy Meredith), Selmer Jackson (William Meredith, Sr.), Robert Warwick (Winston), James B. Leong (Henry Kee), Chester Gan (Kai-Chek), Arthur Loft (Chang-Ho, The Dragon), James Eagles (Johnny Wong, Radio Operator), C. Montague Shaw ( Dr. Trainor), Edmund Cobb (Nicolai-henchman)....the great stuntman Eddie Parker (stunt double for John "Dusty" King and Noah Beery Jr)....after appearing in the serial "Ace Drummond" (1936), John King was signed as one of the trio leads in Monogram B-Westerns "The Range Busters" (1940), as "Dusty" for 18 films that gave us many thrill...Jean Rogers was a leading lady in 30s and 40s in Hollywood, but best remembered as Dale Arden, the hero's girlfriend, in two of the three "Flash Gordon" serials...must make mention the great flying sequences, outstanding vintage aircrafts with plenty of action...meanwhile back to our Universal Serial which is always good till the last drop and this serial is no exception...there is a great deal of entertainment here for the cliffhanger fans out there...all courtesy of VCI Entertainment, who in my humble opinion is the best there is in restoring early serials and features.

If you're into vintage serials as I am, why not pick up a copy of the following titles from VCI Home Video:

20.The Return of Chandu (Bela Lugosi)

Great job by VCI Entertainment for releasing "Ace Drummond" (1936), the digital transfere with a clean, clear and crisp print...looking forward to more high quality releases from the vintage serial era of the '30s, '40s & '50s...order your copy now from Amazon or VCI Entertainment where there are plenty of copies available on VHS, stay tuned once again for top notch action mixed with deadly adventure from the "King of Serials" VCI...just the way we like 'em
Read more
4 people found this helpful
Helpful
Comment Report abuse
See all reviews