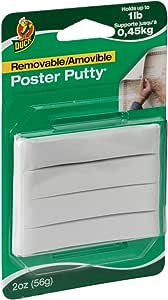 A Brief History of Duck

ShurTech Brands, traces its roots to 1950, when the Melvin A. Anderson Company was founded. Anderson, a tiny industrial tape distributor, set out to supply duct and electrical tapes to area factories. Serendipitously, almost 60 years later, Shurtape Technologies, Anderson’s key supplier, would become the new parent company. However, the unique business relationship between Shurtape and the Melvin A. Anderson company, one that blossomed and helped define the industry, would have never come to fruition had it not been for the key growth engine and eventual owner, Jack Kahl.

Great for temporary mounting of paper items such as posters, charts and decorations, Duck Brand Poster Putty is removable and reusable. It is a safe, clean alternative to tape, nails, glues, tacks and staples won't damage mounting surface and will not dry out. It is non-toxic and non-staining on most nonporous surfaces. This white putty holds up to 1 lb. and works with a variety of surfaces. Poster putty is great for around the house or apartment, dorm rooms, classrooms and even the office - wherever you don't want to leave a mark while showing off your style and personality.

Great for temporary mounting of paper items such as posters, charts and decorations, Duck Brand Poster Putty is removable and reusable. It is a safe, clean alternative to tape, nails, glues, tacks and staples won't damage mounting surface and will not dry out. It is non-toxic and non-staining on most nonporous surfaces. This white putty holds up to 1 lb. and works with a variety of surfaces, but is not recommended for use on flocked or loose wallpaper and on peeling or fresh paint.

4.6 out of 5 stars
4.6 out of 5
7,774 global ratings
How are ratings calculated?
To calculate the overall star rating and percentage breakdown by star, we don’t use a simple average. Instead, our system considers things like how recent a review is and if the reviewer bought the item on Amazon. It also analyzes reviews to verify trustworthiness.

RebeccaB
5.0 out of 5 stars Must have product!
Reviewed in the United States on March 23, 2017
Size: 2 oz.Verified Purchase
I never want to live in a home that doesn't have a supply of putty on hand. Seriously. Everytime I think I am running low on this, I panic. I find so many uses for this stuff. I use it to hang artwork, place labels on storage boxes, and repair things. One of my favorite uses? We put a little bit in Barbie shoes so they aren't always falling off the dolls and getting lost. We also use them on tiny dolls (like Disney clip dolls) to help them stand up when we are setting up a scene. Great product with a lot of uses... especially useful if you have a kiddo around! :)
Read more
70 people found this helpful
Helpful
Comment Report abuse

The Lawn RangerTop Contributor: Guitars
5.0 out of 5 stars Does what I expected, no problems for almost two years...
Reviewed in the United States on May 30, 2017
Size: 2 oz.Verified Purchase
Worked for me so far for almost two years, to hold posters and maps on painted drywall surfaces without any problems whatsoever. A little bit of this goes a loooong way - I ordered 4 packs, and was able to stick 8 medium to large size posters to walls using only 1 1/4 packs. You only need a thin film of the putty mainly along the top edge of the poster, pieces 1"-3" or so in 4-6 places depending on the size, with other pieces along the other edges to flatten it out. You can knead and stretch the putty and then I rubbed a glass slide (for guitar) on the poster itself to make sure everything adhered well. You could use any sturdy round glass to do the same.
Read more
35 people found this helpful
Helpful
Comment Report abuse

It sticks and holds very well and comes off fairly easy. I think I use it for everything except posters! I plan on using it to post pictures in a memorial case that I making in memory of my mom.

Karen McCaulley
1.0 out of 5 stars Disappointed non replaceable picture lost when the putty did not hold
Reviewed in the United States on January 19, 2018
Size: 2 oz.Verified Purchase
Disappointed I lost a photograph off a wall just recently I think it fell in the trash and got hauled out at my office The putty was still on the wall but the non replaceable picture was gone forever.
I have used other brands of this product for years and not ever lost anything.
Read more
26 people found this helpful
Helpful
Comment Report abuse

baker98270
5.0 out of 5 stars Advertised for posters, but excellent for securing just about anything!
Reviewed in the United States on June 17, 2017
Size: 2 oz.Verified Purchase
I use this to secure Funko Pop figures and various figurines and action figures in display cases. It is durable, holds everything securely and doesn't damage either the item being secured or the surface the item is being secured on.

A.R.
1.0 out of 5 stars Defective
Reviewed in the United States on November 14, 2017
Size: 2 oz.Verified Purchase
Seems dried out and doesn't hold up even a photo. Amazon says it is not eligible for return...
Read more
26 people found this helpful
Helpful
Comment Report abuse

tre.a
1.0 out of 5 stars Removable?!?!?! NO. Destroyed my walls
Reviewed in the United States on March 28, 2019
Size: 2 oz.Verified Purchase
We hung a couple posters with this. It’s been up for 5 days. We had to move them. Removing them completely destroyed my walls! It took the paint and the texture off the walls down to the drywall paper. And the one spot that didn’t rip the wall now has a pile of gooey mess stuck to it that I can’t get off so no matter what it destroys walls.
Read more

Genegeeny
4.0 out of 5 stars Serves the purpose
Reviewed in the United Kingdom on March 16, 2014
Size: 2 oz.Verified Purchase
I bought these to use as a remover on my coloured pencil drawings. It works really well. Tried Blue Tack first as you can't buy Duck Putty in Britain but it didn't work anywhere near as good.
Read more
One person found this helpful
Report abuse

nesha berry
1.0 out of 5 stars big greasy marks
Reviewed in the United Kingdom on November 6, 2014
Size: 2 oz.Verified Purchase
I bought this to put stuff up in my rented flat and i read online that this stuff doesnt leave marks. It worked well holding things up. Even heavy wall plaques. But once i removed them I'm left with some pretty big greasy marks. So unless you don't care about leaving marks its great.
Read more
2 people found this helpful
Report abuse

Amazon Customer
5.0 out of 5 stars It works well
Reviewed in Canada on May 16, 2018
Size: 2 oz.Verified Purchase
I had a poster that kept dropping off my wall at 5 AM every morning because the sticky tac I was using wasn't working or was jealous of me sleeping. I put this under my poster instead and now I have reached the mediocrity that is being able to keep posters on my walls.
Read more
12 people found this helpful
Report abuse

Gary Cooper
1.0 out of 5 stars Don't buy. Tears Posters and Dry Wall
Reviewed in Canada on July 19, 2020
Size: 2 oz.Verified Purchase
This stuff is stickier than tape and supports more weight. However:

Difficult to mould and shape. It is stickier than play-dough, so it is more viscous as well. Often one may struggle to get the right amount of this stuff in one piece.

This stuff will tear paint off of regular household dry wall. The bit of wall will chip off.

This needs to be used on surfaces like metal or ceramic. But, it is very difficult to remove afterwards. Little pieces get stuck to the surface and they need to be scraped off with a tool individually. Paper posters will be torn as the putty is removed. Sturdier posters will get pieces of putty permanently stuck on their back until removed with tool.

The bits of this that you tear off are going to be kind of fat. This will make your posters noticeably levitate in front of the wall they are being mounted on. This is not necessarily good or bad.
Read more
One person found this helpful
Report abuse
See all reviews

Page 1 of 1 Start overPage 1 of 1
This shopping feature will continue to load items when the Enter key is pressed. In order to navigate out of this carousel please use your heading shortcut key to navigate to the next or previous heading.
Back
Next
Pages with related products. See and discover other items: duck pen, duck pen, duck pens, white office accessories, best painters tape, Best brick nails for hanging